There's a threat of more rain, and already puddles lie on the sidewalks and streets around San Francisco's Mission High School. Teacher Matt Heller admits he doesn't know how many kids will show up for the field trip to Pie Ranch, an educational farm an hour south of the city. "They don't like the rain," he says with a laugh. "They think they're going to melt." 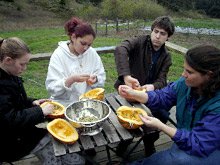 But he has underestimated the draw of the ranch. Despite the rain, nearly the entire class -- eleven students -- is on time and ready to go. Heller has provided bagels, and there's juice, so it's a happy crew that takes to the rented minivans and heads south, down the coast.

Pie Ranch, a wedge-shaped 14-acre piece of property in Davenport, California, bills itself as a "rural center for urban renewal." In the most basic terms, it is the brainchild of three crazy idealists (or right-minded food activists, depending on how you look at it) who came together in 2002 to create something that would change the world -- specifically, to change the world through pie. Wheat is planted for the crust, berries and pumpkins are cultivated for the filling, and goats and chickens are raised for milk and eggs. Kids come -- not just once, but again and again -- to learn about farming and food.

"Karen proposed to us on the day after our wedding," remembers Jered Lawson, who, with his wife, Nancy Vail, and their longtime friend Karen Heisler, are the Pie Ranch triumvirate. "It was like we were in a fit of commitment. We said yes."

"Jered and I had always talked about doing something land based," Heisler recalls. "We had our eye on this piece of property, and it became available, so we jumped." They got the farm running and looked around for a school to partner with at the same time. "We had a few on our list, but at Mission, when they heard the word farm, they were all over it," she adds. 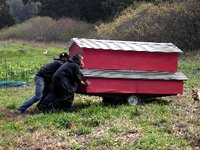 Heller, for his part, had been looking for adjunct experiential programming for his special-needs kids. He was thinking of planning a garden, but he wanted something bigger. Pie Ranch came along at the right moment. "We had a program targeted to the needs of kids for whom education in a classroom is challenging," says Lawson. "This may or may not be a college-bound population. They need as much as we can give them in terms of post-high school options."

The first Pie Ranch field trip took place in May 2005 and involved fifteen kids. Right away, it was clear to Lawson that something special was happening. "The farm engaged them," he says. And that engagement soon started making itself felt in other ways. Within three or four months, the impact on the students was, he adds, "clearly meeting, if not exceeding, our expectations."

The students bloomed in response to the increased educational nutrients and ample fresh air. They came to class and performed in ways they hadn't before. They started to reflect on their food choices and occasionally made different ones by eating less junk food. By coming to the ranch, where they had to interact with one another and with their environment, they began to overcome fears and to grow.

What's more, they're taking what they're learning back into their families and into their community, sowing seeds of healthier eating throughout the city. Pie Ranch certainly isn't the first program to get kids into the fields -- farm schools in Massachusetts, for instance, have undertaken similar efforts. As with school gardens, digging in the dirt provides a broad -- and lasting -- introduction to a variety of subjects. Every core curriculum subject can be approached through some aspect of farming, and, by making it hands on, the learning sticks. 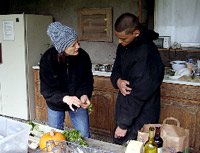 Down on the Farm

The first sight of the ranch is a little disappointing. It is, after all, February, and even in fertile California, it's not quite spring. Rows of tiny plants dot the fields, chickens strut around in a pasture, and, to the south, wind rushes through some hillside eucalyptus trees. Lawson, wearing his baby daughter Rosa on his chest, hikes everyone up the hill so the whole farm can be seen. "What's different today?" he asks.

The kids are quick to answer. There are new stepping-stones around the yurt (the round building Lawson's family of four calls home), the plastic sheeting over the strawberries is new, and some plants that look like weeds have grown taller. They take some time to talk about those weeds, which are actually a cover crop of grains and legumes that keep the topsoil in place and return nutrients to the soil.

Then it's time to break into groups for the various morning tasks, and this gets a little tricky. The students who have been coming to the ranch for a full year and who are comfortable with one another want to work in the same group, but Lawson assigns a veteran Piester to lead each work detail, and, with a little grumbling, they split off to their jobs. Paul and Cooper, interns from the agroecology certification program at the University of California at Santa Cruz (UCSC), take groups for the farm-intensive work, while the Mission teachers each work with a group and then circulate to check up on them all. The kids' duties are diverse and complex:

The rain is still holding off, so, later in the morning, after many of the jobs have been completed, the students create posters for a food event happening at the school in the coming week, and write in their journals about their time at the ranch (today's topic: senses and feelings). The kakai seeds come out of the oven and are enthusiastically devoured, as is the experimental popcorn. (Lawson explains that, due to wet weather last fall, the kernels weren't dried quite right.) Lunch is cooking, but before everyone sits down to eat, the whole group is asked to "circle up" on the grass in front of the kitchen.

"What are you grateful for?" Heisler asks.

There's some head hanging and foot shuffling, but quickly the responses become serious.

A student still new to the program has helped cook the lunch, so he is drawn out a little and asked to describe how he made the chili. When he says they added mustard and beer, everybody laughs and whoops, but he's clear that he didn't drink the beer and that it really did make the chili taste better. He knows, because he tasted it before and after the addition.

After lunch, there's free time before everyone piles into the vans and heads back to the city. Some of the boys trek out to "the pond" to throw things into the water, while another group sits at the picnic tables to tease each other and their teacher, Corky Kern, in Spanish and, when that fails, English. 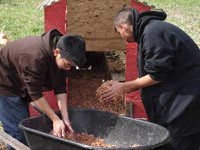 Another Piece of the Pie

In September 2005, at the first Pie Ranch trip of the school year, a piece of what the program lacked became clear to Heisler. "I said to the kids, 'We want you to consider this your place. You can come here any time -- it's your home.' And one student piped up and said, 'But we don't have cars.' It really hit me that we needed a component of the program in their home community. We needed to bring the farm to the city, not just bring the city kids to the farm."

Heisler consulted with neighborhood groups and with the whole Pie Ranch community, now including several teachers at Mission and dozens of kids, before she sold her house and purchased a building at 25th Street and Mission, just a few blocks from the high school, and turned a small downstairs apartment into a café. Heisler and her husband and daughter live upstairs and rent out the other units in the restored structure.

The café has been a hit since it opened in January 2007. The chalkboard menu proudly proclaims "Fresh, local, fair, organic MISSION PIE" and adds the message "Community, health, environment." The pies and other baked goods are produced locally, some with grain and filling grown at Pie Ranch. Five students from the program work weekends and after school selling coffee and pie to a wide variety of customers, from working folks to young moms to fellow students to neighborhood seniors.

After a year of Pie Ranch visits, the students have some understanding of where food comes from; the café is a way to see how and where it goes. "We can give these kids a jump start on creating work lives based on something that matters to them," Heisler says. "This is relevant and meaningful in terms of future work." 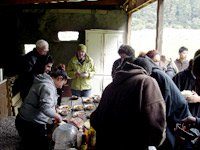 As fast as Pie Ranch has made it into the fabric of Mission High School, it is spreading even faster. Now Nextcourse, a nonprofit food-education organization, has a grant to promote nutrition education at Mission through trips to farmers' markets and the local co-op grocery. More teachers are getting their students involved in trips to the ranch; this spring, Mission's English-language learners will get their turn, bringing the total number of kids who have been to the ranch up to about seventy-five; about half of those will be repeat visitors.

The ranch is growing as well, with new chickens on the way, a cow, goats that will deliver kids later in the spring, and plans for a roadside farm stand to sell produce and eggs. A capital campaign to acquire more land is in progress. The challenge, says Lawson, will be to grow the educational experience without compromising it. Preserving the student-to-teacher ratio is key, so the flow of interns from UCSC is crucial.

"We want to expand to other schools, too," he says. "Every high school could benefit by having a link to a farm."