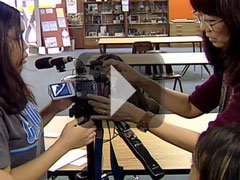 The place: Honolulu, Hawaii. The contest: the 2003 Hawaii Student Film Festival. The winners: Moanalua freshmen Bao Jun Lei, Mari Maeda, and Gerald Rojo II, who researched, videotaped, and edited a short documentary on child labor as part of their work in an integrated studies/multimedia program at Moanalua.

The prize: The project (which had already earned two A grades from teacher Lynne Sueoka for the students -- one each in social studies and media communications) brought acclaim to the young filmmakers and their school from people throughout the state who judged the videos or otherwise took part in the festival. And the acclaim came after the disappointment of taking no prizes in the National History Day competition, the event for which they initially produced the video. The difference in reception of the same product reinforced a valuable lesson: losing a competition does not mean a work is mediocre. Different audiences look for different things.

Natasia Gascon works on a multimedia project on states' rights.

Presenting to a Larger Audience

Sueoka encourages her budding cineastes to share their schoolwork outside the classroom and to enter contests. "I want to give my students the experience of competing with the best -- akin to sports teams who come up against worthy opponents where, in a hard-played game, everyone is, indeed, a winner," she says.

"We did try harder because we wanted to win," concurs Bao, a straight-A student whose dream is to become a video producer, filmmaker, or computer networker. "But we're thinking next year we can do it even better.

Natasia Gascon, a student who put together a Web package on states' rights for the National History Day competition, agrees that an outside audience is a big motivator. "Since we're going to be presenting this to professional judges, historians, and a big audience, it kind of has an impact on our quality of work," says Natasia. "We want to make sure they're impressed with what we're presenting."

Natasia and Bao are two of fifty-five students in the two-year-old integrated language arts/multimedia, social studies/multimedia program at Moanalua High, a sprawling, 2,000-student concrete complex seven miles northwest of Waikiki with a view of Pearl Harbor and the blue Pacific. Producing high school graduates able to meet the challenges of an ever-changing technological world is just one of the goals of the program. It also aims to eliminate the anonymity of large high schools, teach students to think for themselves, and give them the skills to present their knowledge in new ways.

The integrated program is an offshoot of Moanalua's Media Communications and Technology Learning Center, dubbed MeneMac for the school's mascot. Drama and communications teacher Dan Hale was sold on the idea of integrating core curriculum with multimedia when he saw the results with lackluster students. "All of a sudden their achievement started going way up and they got real interested in the class," Hale says. "And we thought, 'Hey, let's try and reproduce this maybe on a bigger level.'"

Sueoka's ninth- and tenth-grade integrated classes are the result. Lectures are down to a precious few. Instead, students mostly do their own research or lead their own discussions, including ones on class listservs. When the class read To Kill a Mockingbird, Sueoka briefly guided the discussion. Then the projects related to the beloved Harper Lee novel began, which included not only multimedia but crossed over into social studies and civics as well. Students held a mock trial, which they videotaped. They were also assigned to follow up on the theme of injustice by finding examples closer to home, and by creating videos. Bao did his on why students aren't allowed into R-rated movies. Gerald did his on unfair grading policies. Other topics included handicapped parking spaces and discrimination towards new immigrants by longer-term immigrants.

For an assignment on metaphors, Bao Jun Lei did a video of himself as a Jack-in-the-Box.

In a study of metaphors in poetry, the students were asked to write about metaphors in five poems and create a Web site to hold their work. Then they were to use them in a video about their own identities. Bao, who came to the United States from China when he was one year old, compared himself to a Jack-in-the-Box. His video shows a puppet bursting out of a box as "Pop Goes the Weasel" plays. In the next shot with the same music, Bao himself pops out of a box and then goes running through the campus. "Most people say that Bao is a wild and crazy kid," the wild and crazy kid says in a voiceover. "Bao is the one who's always everywhere, and that's why he's like a Jack-in-the-Box.

Students also wrote metaphorical poems. Rojo's "steed" was his bright red scooter. Online student portfolios are the primary means of assessment. The students also must provide examples of work that show they meet the six "learner outcomes" required of all Hawaii students: be responsible for one's own learning; understand that it is essential for human beings to work together; be involved in complex thinking and problem solving; recognize and produce quality performance and quality products; communicate effectively with a variety of audiences for a variety of purposes; and use a variety of technologies effectively and ethically.

Gerald Rojo II and Bao Jun Lei work on a video that eventually won the top prize at the Hawaii Student Film Festival.

Sueoka views the technology as adding a critical element to the academic program, partly because it forces students to communicate in a different way -- a way that requires them to really know the material. "It may be by having a voiceover. It may be by having a video clip. It may be by the provocative music they use in the background. And I feel when that happens, they have truly taken this information and rather than just given back in a term paper, they've made it their own," she says.

Sueoka also sees great benefits -- academic and social -- in the smaller school-within-a-school, where she has the same students for three periods a day. "If you have them more often, and you have them for a longer period of time, you really then have the time to truly know them," says Sueoka.

Schoolwork is a cooperative endeavor at Moanalua High School.

Her classes do feel like a family affair. There is joshing and chatter that may qualify as chaos to traditionalists, but the good-humored banter is in the context of creating something together, hashing out ideas, discarding what doesn't work and trying something else, and dividing work equitably and with an eye toward individual talents. There also is a good amount of quiet, focused concentration, especially as deadlines close in.

"When you talk about learning styles and diverse learners, technology does give students multiple ways to show whatever goals you have set," says Sueoka.

Moanalua Principal Darrel Galera notes, however, that technology is a means to an end. "We're not leading with the technology tools," he says. "We are really starting with what the learning process is all about. We think that's the secret."

Whatever the philosophy behind the technology, Natasia knows she likes it. "The only reason I'm interested in school now is [because of] this program."

To learn how teacher Lynne Sueoka got interested in technology in schools and became expert enough to train other teachers, see One Teacher's Story: Using E-mail as a Teaching Tool.