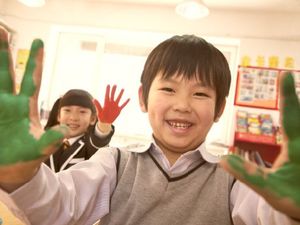 Continuing to follow up the post 10 Signs of a 21st Century Classroom...Some of the most important skills to foster in students in the modern classroom are those things that computers cannot do well. Creativity is one of these areas.  Often considered a “soft” skill, it can be lost in a student’s struggle to get the “right” answer (see note #2). Creativity education is in some ways more difficult than instructing students in the physical geography of Asia.  However, it is worth cultivating. As one of our teachers put it “[Creativity is] when a student or a group considers something new, or in a new way, or approaches something in a way that is original to them.” Creativity makes possible art, music, invention, storytelling, and problem solving.

The internet, properly used, contains a vast wealth of factual information. Properly instructed students can look up the atomic mass of hydrogen or the author of “Leaves of Grass” much faster than memorizing the information (see note #3). Teachers may either ban this useful storehouse of knowledge from the classroom or use the extra time to have students envision the arrangement of a cloud of hydrogen molecules or to write an original poem using the style of Walt Whitman.

Contrary to some opinions, creativity is not something that is in your DNA. It can be taught.  Giving students time and a structure for brainstorming is a good start. Brainstorming techniques have already been covered in detail by others, but a few of my favorites include think/pair/share, mind mapping, brain writing, and teleportation. Please feel free to share your preferred methods below.

Creativity is often restrained by life experiences. This is particularly true of students who may have never participated in the world outside of their own family and community. Providing students with the means to broaden their horizons has a large impact on their ability to think outside the box. Similar to the brainstorming method of teleportation, students may be asked how they would prevent World War II, solve the California drought, or treat HIV.

Our junior retreat has proven to be particularly useful in this goal. Students are taken 50 at a time for an overnight experience in downtown Austin. In collaboration with several outreach programs, they eat and talk with the homeless community. In contrast to many retreats, there is no direct service component involved; students just get to know people that they might otherwise never come into contact with. Upon returning to school, students report a much improved opinion of those live a different life.

Physics students at our school were surprised last month to receive an option for their assessment at the end of a unit on sound. They could choose to either take a traditional exam with a number of word problems or post a video of themselves playing music on wine glasses along with a short explanation of the science behind resonance. While many chose the test to “get it over with”, a number of amusing musical performances also showed up.

Our Latin teacher is fond of using a variation of a differentiation method called “Think Tac Toe” to promote student creativity. For a recent project involving Roman Britain, students could produce a newscast, write a diary, develop a travel brochure, or create an advertising campaign. Alternatively, they could also choose a more traditional research poster.

This one might be obvious, since it has “creative” in its name. The student-led group meets on Tuesdays and Thursdays during lunch to share new story ideas and to spend time reflecting on thought prompts. Key to the participation in the club is the Nanowrimo event each November when members attempt to write a 50,000 word novel in 30 days.

Our world history classes do something really cool when studying the Enlightenment. Students are given a figure from the 1700s to research and embody. At the end of the unit, a “salon” party is held where a student moderator initiates conversations between the various characters. Students who received musician characters are encouraged to bring their instruments and provide music for the setting. Costumes are also recommended.

One key concept of creativity is coming up with an alternative way to do things. However, there is so much information to cover the course of a year, that it is tempting to move directly from one unit to another. Providing time for students to reflect over their knowledge and approach yields powerful benefits. There is a whole post on this topic pending.

This is one that I do with my science classes. While I would love to totally embrace Genius Hour, I must admit that I’m not quite at the point where I can go full “20% time”. Instead, students are given a period of 5 minutes at the beginning of each class (a “Goertz nap” as some call it). They must remain quiet and encouraged to close their eyes to minimize distractions. However, they may spend this time thinking about whatever they wish. This is usually a prompt free time, although during National Poetry Month I have been opening and closing the time with a short poem. A summary of initial student thoughts can be found here.