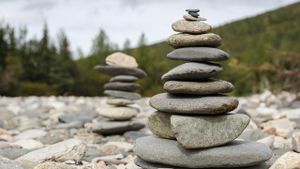 Every now and then we teachers come across a class with an abundance of energy—sometimes so much energy that teaching seems like an impossible mission. Students fidget with their hands and feet, dance in their seats, and engage in constant side conversations with their classmates.

Last year, I inherited a first-grade class that fit the description above. They were curious, they were bright, but it was clear from day one that they needed help to channel their excess energy. I didn’t want or expect them to sit statue-still. Much to the contrary—I always encourage active learning, collaboration, and ongoing participation in the classroom.

However, I wanted them to understand the importance of balance. When you come across a class that is constantly in a highly agitated state such that it begins to interfere with their learning, something needs to be looked at more carefully. My fellow teachers and I were constantly asking ourselves, “How can we help this group?”, “What strategies can we incorporate in our classrooms?”, and “What tools do they need to be more at peace with themselves?” The conversations were endless. The strategies were endless. And so was the students’ energy.

Since our school works in a transdisciplinary manner, teachers across subject areas often collaborate. At the time, students were learning about rocks and the rock cycle with their homeroom teacher. In Art, I wanted to explore rock sculptures. I was hesitant to explore this theme at first, anticipating possible conflicts due to the group’s agitated temperament, but I decided to move forward.

Little did I know the powerful effect rocks and rock-sculpture building would have on the students individually and as a group.

We began our rock sculpture inquiries watching videos of Michael Grab creating freestanding rock sculptures in the wilderness. Students were awed with Michael’s each and every move. As he piled one rock onto another in the videos students reacted with “wow” and “ahh.” They were amazed, so amazed that one student challenged the group: “This can’t possibly be real, is it?” Once we finished watching the videos, students shared some of their many observations. I then asked them, “What traits must an artist like Michael Grab have in order to build the rock sculptures we just saw?”

“He needs to know a lot about rocks.”

“A lot of concentration.”

They were fascinated. They were involved. We were off to a good start.

The following class, students came to the art room eager to build their own rock sculptures. At first, piling one rock on top of the other was quite an accomplishment, until they discovered they could pile up one, two, three, four, even five rocks. Every time a sculpture collapsed, students immediately began rebuilding it. Students were open to constant trial-and-error, learning more from their failures than successes. Yet, little frustration was evident.

Weeks went by and the sculptures became taller and far more elaborate. In small groups, students shared their discoveries and identified ways to make a stronger base. They realized that looking closely at the characteristics of the rocks allowed them to make predictions and anticipate possible outcomes. The rocks varied in shape and size: Some were flat, some were rounded, some were jagged, some were pitted. All of this mattered once students began the rock balancing act.

Students were quick to notice how inner focus was important while building their rock sculpture. Bothered, one student shared with the class, “I can’t concentrate with noise!” Another student claimed that someone spoke so loud in class that it destabilized his sculpture, making it collapse. Some even sought out hidden places and transformed them into their rock-sculpture-making oases. They realized that in order build a sculpture, they had to align their physical and mental energy. They needed to focus on their intent and act upon it carefully. A quick unplanned move could jeopardize the stability of their entire sculpture, making it collapse.

Students’ willingness to challenge themselves was extraordinary. They took risks, and the open-ended nature of the activity allowed them to engage in constant problem-solving. The students also became more aware of their bodies in the art room, moving carefully within the room. Some began working on the ground because sharing a table was too much of a risk. If the person beside them dropped a rock it could initiate a domino effect of sculptures collapsing. The class with endless energy became, to my surprise, the class with endless focus.

Once students became more confident of their sculpture-making abilities, they began working collaboratively. There were situations where the entire class was engaged in building one large sculpture together. Can you imagine one sculpture being built by 24 students? Their disposition to accept responsibility, cooperate, resolve conflicts, and make group decisions in an egalitarian manner was visible during these moments.

There was an incident where students were building a rock sculpture collaboratively and one student ran to the sink. She found a sponge, soaked it with water and ran back to the sculpture. “I am going to press water from this sponge onto our sculpture. If it’s strong it will stand still.” They approached this moment of uncertainty with excitement, gathered in a circle. Water dripped from the sponge onto the sculpture. The sculpture stood tall. They looked at each other and celebrated their success.

Elements of nature can become powerful teachers. Rocks, unlike twigs, leaves, and dirt, cannot be modeled or reshaped with our bare hands. Rocks are hard, sometimes heavy, and often resistant. In order to work with rocks, students had to accept their traits and challenge themselves. When students were asked to reflect on their rock-sculpture-making experiences, most of them highlighted the importance of balance, patience, and persistence. One student noted, “I can only create a balanced sculpture if I am balanced.” Once our inquiry cycle finally came to an end, they asked, “Can we have a rock corner in the art room for the rest of the year?” “Of course!” I responded.

An entire year has gone by since we first began exploring rock sculptures and students continue seeking the Rock Corner. The class still has an abundance of energy, but every time they interact with the rocks, the world around them slows down. They tune inwards and focus permeates the room.