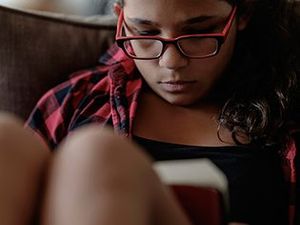 It’s not that I don’t like being around people. I do. I just feel smothered. As I leave early, I walk by my roommate, who urges me to stay. I continue walking, and I fall asleep that night thinking that there’s something wrong with me.

Six years later, my mood changes upon reading Susan Cain’s Quiet: The Power of Introverts in a World That Can’t Stop Talking. It’s the most helpful book I’ve ever read, and also one of the best researched.

“Introverts…may have strong social skills and enjoy parties and business meetings, but after a while wish they were home in their pajamas,” Cain writes. “They prefer to devote their social energies to close friends, colleagues, and family. They listen more than they talk, think before they speak, and often feel as if they express themselves better in writing than in conversation. They tend to dislike conflict. Many have a horror of small talk, but enjoy deep discussion.”

Cain has me pegged to a tee, and I feel a great sense of relief and validation. I’m an introvert, a perfectly normal person living in a world obsessed with championing extroverted characteristics: dominance, assertiveness, spontaneity and loudness.

I am thrilled to speak with Cain, who says that of all the audiences she’s happy to reach, she’s most passionate about students.

“I hear too many stories of children who are given the message by very well-meaning teachers that there’s something wrong with the way they are,” Cain says. “I think well-meaning teachers see their role as being to turn introverts into extroverts. We really need to understand that an introvert is a totally normal personality type.”

I wonder about teachers who place a big emphasis on class discussion, and if this unfairly discriminates against introverted students. I’m equally concerned about whether teachers are doing right by encouraging these kids to “come out of their shells.”

“The most recent study found that half the population are introverts. Other studies have said a third of the population,” Cain says. “That’s one out of every two or three students. They don’t need to be changed, these students. They do need to be cultivated so that they make the most of their natural talents, so they learn the skills that they need to flourish in extroverted schools and workplaces. But that’s different from changing who they are.”

Cain tells me that introverted children often have an easier time identifying their interests, and that they become extremely passionate about pursuing one or two subjects. As I hear Cain talk, it’s like she’s reading my mind. With teaching, running and blogging, my introverted personality enhances my work ethic and productivity.

Last month, I wrote about school culture’s unhealthy insistence upon instilling in young people leadership qualities. Before I even have a chance to ask Cain for her take, she’s already addressing the issue.

“One of the mistakes that I’ve seen in education as I toured the country and sat in on classrooms, I noticed that leadership has become a real buzzword,” Cain says. “There’s an expectation that everybody should be a leader. It’s kind of like, ‘Well, why? Why does everyone have to be a leader, exactly?’ I don’t think we’re designed that way. I think if you look at many of the great thought leaders and political leaders in history, they were not the ones who were leaders in the classroom.”

Cain is quick to provide an example.

“Gandhi would run home from school every day as soon as class was over because he didn’t want to have to talk to the other students,” Cain says. “He was very shy and very reserved. He came to leadership out of a sense of passion for his causes, not out of being a ‘natural leader,’ whatever that is.”

I can already hear the naysayers, insisting that fostering leadership potential provides the best possible avenue for success. To that, I say hogwash—and Cain agrees.

“Why can’t [students] be really creative or really thoughtful or really kind?” Cain says. “Or any number of other attributes that serve the greater good. It seems like a collective lunacy we’ve bought into, that everybody has to be a leader. Really, if everybody was a leader, we would get nowhere.”

I ask Cain how teachers can better reach introverted students. It’s important to acknowledge that this involves more work, Cain tells me.

“With the extroverts, they’re raising their hands,” Cain says. “They’re telling you what they know, what they don’t know. They’re giving you a very fun back-and-forth. It’s just easier. An introverted student is sitting in the class. Their face might seem impassive, so you have no idea. Are they engaged or are they not?”

Four years ago, I stopped grading students on class participation. Any type of assessment is subjective, but this feels especially so. I notice no clear correlation between how much an individual speaks, including the quality of what he or she says, and performance in all other aspects of the course.

“Why is engagement measured only through how often do you raise your hand?” Cain says. “There’s a lot of different ways of being engaged with material or participating in a classroom. This is especially true now in the age of technology and social media. I know teachers are beginning to experiment with bringing social media into the classroom. What I’m hearing is that if you generate a class discussion of kids that’s happening online that the quieter kids will often participate just as much when it’s online as the more vocal kids.”

I think back to my conversations with Curtis J. Bonk, Professor of Instructional Systems Technology at Indiana University. Bonk is also author of one of my favorite books about learning, The World is Open: How Web Technology Is Revolutionizing Education. I wish that he and Cain would work on a project together.

“If you are introverted in a regular classroom setting, online environments allow you to feel comfortable and at home,” Bonk tells me. “You are in a safe harbor. You can tinker with your ideas. You can search the Internet to find a visual cue to enhance what you’re trying to show.”

I’m eager to hear from Cain about how educators can more effectively teach and assess introverts.

“I think it is a matter of finding one-on-one time with those students, figuring out what are the areas that they’re really interested in and maybe calling on them or asking them to participate around those areas. Giving them extra assignments around their areas of passion.”

I have taught many introverts, and many fear that college admissions offices will frown upon a perceived lack of traditional extracurricular activities. Cain and I discuss whether this fear is justified.

“It feels like if you’re not the editor of the paper, president of the student body, or captain of the soccer team then nothing else counts because that’s what high school culture tells you,” Cain says. “But that’s not actually really true from a college admissions point of view. They might actually be more interested in the kid who is excelling in less common activities. It makes you seem more distinct and more individual.”

Before we part ways, I ask Cain to provide one final piece of advice for introverted students trying to succeed in high school.