The deadline for the video submissions to our first system-wide film festival is quickly approaching. With this in mind I thought it would be a good time to reflect on how things have gone up to this point. For this entry I will focus on the following topics:

As I mentioned in my previous entry, we have 90 brick-and-mortar schools and one virtual school in our district. Adequately promoting anything in a district this size can bechallenging, especially when trying to promote something brand new like a film festival. To help in this 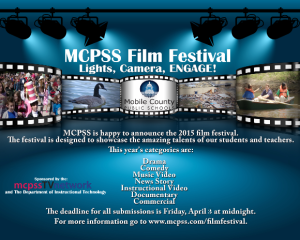 effort our communicationsdepartment created a poster design that our print shop produced 2 copies of for every school. These posters were sent to the schools to be displayed in high-traffic areas. To ensure each school was aware of the posters, we contacted the media specialists and asked them to make sure the posters were strategically placed.

Aside from the posters there are a few other ways in which we have promoted the festival. First, the communications department created a banner for the main page of our school system’s website. This has helped catch the attention of teachers, administrators, parents, and students. Next, we reached out to principals. We did this in two different ways. First, we made sure the festival was briefly mentioned at each principal meeting. Second, we sent them information about the festival in their “principal packets”. These packets are the primary way our principals receive information about district initiatives.

We also made it a point to spend a few minutes discussing the festival at each of the teacher workshops we have facilitated since January. These discussions have probably done the most to create awareness about the festival. During these discussions teachers were not only told about the festival, they were also informed of upcoming workshops that were designed to teach them how to create and edit video. Teachers were then able to immediately sign up for these workshops if they were interested.

As mentioned above, we put together workshops that were designed to give teachers an opportunity to shoot and edit video. Since the ultimate goal of the workshops was to get students creating video, it was decided that the focus would be on using equipment the students would have the greatest access to. 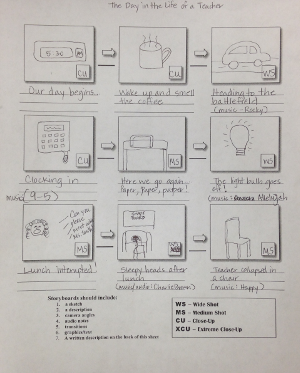 Participants were taken through a process in which they first selected a team to work with. Each team was then tasked with brainstorming ideas for a video. After an idea was agreed upon the teams had to created a storyboard of their video. (To learn more about storyboarding go here.) This gave them the opportunity to really think about how their videos would flow, where they wanted to shoot each scene, what they would say, and what props they might need. Once the storyboards were completed each team was given a video camera to make their videos.

Although some teachers used their phones to capture video, most used the Cisco Flip video camera we provided. This camera is easy to use, holds up to 2 hours of footage, and quickly connects to a computer with its built in USB arm. Once all of the scenes were filmed they were downloaded to participant laptops and opened in Windows Movie Maker. This program is fairly easy to use and is free to download onto any PC running a Windows OS. Participants were provided training in the basic functions of Movie Maker, and were given plenty of time to work on their own interpretation of their footage. 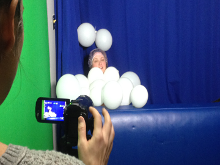 At the end of each of these two-day workshops participants submitted their finished products, popcorn was popped, and everyone enjoyed a screening of the videos. These workshops proved to be great fun for the participants while at the same time building their confidence in video creation. The hope was that these teachers would go back to their classrooms feeling inspired to construct a video creation activity for their students. As it turned out, many did just that.

At the time of my previous writing there were some documents that had not been completed. These documents are the judging rubric and the guidelines and rules for the festival. Both of these documents are now available for download on the website (mcpss.com/filmfestival). We had to make sure these documents were available early on so students and teachers would have access to them prior to creating their videos. Once the documents were looked over by our legal department we posted them to the site. It turned out the legal department only had to make a few changes to the rules. If you are considering a film festival for your school district it is essential you have your legal department on board in the early stages.

To continue our planning for the awards ceremony we pulled together a committee that consists of personnel from the communications department, drama/theater teachers, and members of the instructional technology team. This committee has proven to be a tremendous asset to the festival. The ideas and resources that have been tapped from the committee’s diverse members have made the process exciting and worthwhile.

The trophies have been selected, the stage has been designed, and the red carpet is ready to be rolled out. There is still much to do, but excitement is building as the video entries continue to be submitted. I look forward to sharing with you how it all turns out.

This is the second of a four-part series on organizing a district-wide film festival: