I confess I was nervous on the final day for video submissions to our inaugural film festival. I wanted so badly for the festival to be a success, but I knew success would largely depend on how many entries we received. I kept asking myself if we had done enough to promote the festival? Had we done enough professional development for teachers to feel comfortable doing video projects with their students? Was there enough interest in the district to even justify a film festival? I was going to have to wait until midnight (the deadline) to get my answers.

In talking with the other instructional technologists in my department we surmized that if we received around 30 entries we would have enough videos to be able to put on the festival. The day before the deadline, however, I had received half that number. As the final day progressed I anxiously watched to see if videos were being uploaded to the shared folder. Much to my surprise and delight, by the time the midnight hour arrived we had received a total of 78 videos. I couldn’t wait to share the news with my coworkers, and I was excited to get started with making preparations for the festival and the culminating awards ceremony.

We decided to have a festival week in which all the video submissions would be viewable on our YouTube channel. This made it easy for anyone who was interested in seeing the videos to do so, plus it gave people a chance to become familiar with the entries prior to the awards ceremony. We decided not to have a “viewer’s choice” category because we weren’t quite sure how to keep it from being a popularity contest as opposed to a true measure or viewer preference. That is something we will have to give more thought to in the future.

We divided the videos into the 7 categories (comedy, commercial, documentary, drama, instructional, music, and news), and into the four groups (elementary, middle, high, and teacher). 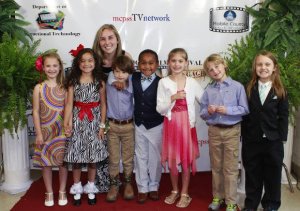 Because some video entries involved entire classes of students, we knew we could not afford to provide a trophy for every person involved in the winning videos. Instead, we decided to present one trophy to the school of the winning video. After the ceremony we sent certificates to each student (or teacher) that contributed to a winning video.

The most intensive preparations focused on the awards ceremony. There were so many issues to consider it became quite a challenging (although exhilarating) endeavor. One of the greatest challenges we had in preparing for the ceremony was gaining access to the auditorium. The building was booked every day leading up to the day of the ceremony. There was even an event taking place that morning, which meant we could not get into the building until lunchtime.

In a very short period of time the stage had to be set up, as well as all the other preparations such as laying the red carpet, erecting the backdrop for the photos, setting up the velvet ropes, testing the audio and video equipment, and rehearsal.

A great deal of credit has to be given to the theater teacher and his students. Watching them erect the set in such a short period of time was inspiring. The set, however, was only a portion of what they did. The theater students also operated the lights and the audio, helped manage the backstage hustle and bustle, and even played the role of screaming fans and paparazzi as the nominees walked along the red carpet. If you are considering a film festival for your school district I cannot recommend enough employing the services of a school theater group.

Once the set was complete and all other preparations had been made, we anxiously waited to see if people would come. To our delight, not only did they come, but by the time the ceremony was scheduled to begin the theater was almost at capacity. We realized very quickly that if the festival grew in popularity we would need to find another venue for next year’s event.

The ceremony turned out to be a wonderful occasion with very few glitches. The teachers, students, and parents had a great time, and many of them contacted us afterwards to let us know just how much they enjoyed it. It was truly a celebration to remember.

Now that the festival is over and I have had some time to reflect, I would say without a doubt it fulfilled it’s original purpose which was to “encourage student creation, communication, and collaboration by providing a platform for community recognition.” Our challenge now is to figure out how to make it even better and more meaningful for our teachers and students next year!

This is the third of a four-part series on organizing a district-wide film festival: