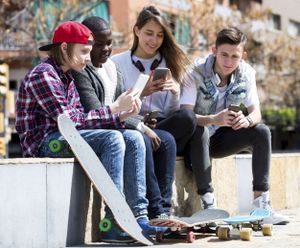 iStock.com/JackF
I will admit it. I downloaded Pokémon Go to my phone the day it was released. Was it fun? Yes. Should teachers embrace it? Absolutely!

Some of the early press Pokémon Go garnered was negative. It included stories of discovered dead bodies and people getting mugged at Pokéstops (locations in the real world in which you collect virtual items). And then there were the reports of the (now fixed) bug that potentially gave Pokémon Go’s publishers the rights view user’s Gmail accounts. These stories, however, reflect other technologies that entered the mainstream marketplace.

Only a few years ago teachers were warned to stay away from social media. Nowadays, schools regularly use social media to communicate with parents, students, and staff. Where I teach, snow delay announcements come on Twitter before phone calls are made! Pokémon Go is elegant in design: simple to learn, yet difficult to master. The mechanics of play in Pokémon Go are relatively easy to learn: you flick “Pokéballs” at augmented reality monsters on your phone’s screen. No directions are given in the app -- that is, until you catch enough pokémon and level up to join a “gym” and a team (Go Team Valor!).

As a teacher, I see Pokémon Go presenting an opportunity—a teachable moment—to teach digital citizenship with location-based play. Even the biggest critics of Pokémon Go concede that the outside play it affords is a good thing. Regarding educational potential, I would argue that physical play is secondary to the social learning that takes place with Pokémon Go. Sure, video games sharpen hand-eye coordination and pattern recognition. But they also teach problem solving skills, resilience, and meta-cognition. When players meet together at Pokéstops—which are often parks, museums, and historical buildings—meaningful conversations can emerge. Like Minecraft, the learning in Pokémon Go resides in the game’s growing community of practice. There is social knowledge construction that takes place among its players.

Let’s use Minecraft as an example. To build a Snow Golem, players visit online communities (e.g., YouTube, wikis, discussion forums) to learn which blocks are required for its construction. Pokémon Go is similar. After catching Pokémon, I had limited knowledge about the Pokémon universe. I found myself poring through websites to learn more. What is a lure module? What effect do potions have?

Game scholar Raph Koster considers Pokémon Go to not be just an augmented reality game. Rather, he argued that it is a massive multiplayer online (MMO) game, like World of Warcraft, but pervasive, in the real world. In this sense, Pokémon Go is more like live action role-playing (LARPing), than a smartphone game. I recommend reading Koster’s article here.

After reading it, consider an Edu-LARP with your students. In a school setting, teachers can have students make location-based games. Have students pin and describe locations onto Google Earth, and then use incense and lures. Both incense and lures are inexpensive, and have been a boon to local businesses, which can buy them to attract patronage. Field Day Lab, at the University of Wisconsin, developed an open source Augmented Reality and Interactive Storytelling (ARIS) authoring tool for just such a purpose. ARIS is a free platform that allows anyone to publish a mobile app that interacts with a physical location. Other options for student content creation include utilizing free iBeacon technology, which sends push notifications to smartphones when nearby a location. Check out Locly, a free iBeacon tool. Or read fellow Edutopia writer Monica Burns articles to learn more on iBeacons, QR codes, and scavenger hunts.

Regarding Pokémon-style battles, there is an educational game on the market that is modeled on its play. Mars Generation One: Argubot Academy, from GlassLab, is a tablet game that teaches argumentation as part of the Common Core State Standards. The game’s objective is to teach students how to evaluate and create arguments by connecting data and evidence to support a claim. Rather than collecting Pokémon, students collect claims and evidence in a Mars base. Students then equip robots with the argumentation claims and evidence they collected, and then battle. GlassLab provides a teacher dashboard, too, to track student learning in the game.

The popularity of Pokémon Go is a cultural phenomenon that should be embraced by teachers. I recommend getting the app—after all, it is free. Then, think of the opportunities for learning that take place as you play. Can your students create a Pokémon-style card game collecting characters from a novel or elements from the Periodic Table, and then combine to battle? Please share your ideas below!