Now that our school district’s inaugural student film festival is behind us and we have had some time to reflect, I thought a final post on lessons learned might be appropriate. Here are 7 important issues worth considering if you are thinking about creating your own student film festival.

We had an initial discussion about the film festival at the beginning of the school year, and we started making more concrete plans later in the fall. Decisions had to be made and issues to be addressed regarding the festival (and the culminating awards ceremony) from the time of its inception until the day of the ceremony on May 1st.

The earlier you can get started, the better. We began promoting the festival in January, but feedback from teachers let us know that many of them felt rushed to complete a video project with their classes before the April 3rd deadline. The good news is that since teachers know we will be doing it again next year they can begin their projects much earlier.

2. Pull Together an Energetic and Diverse Committee

Our committee was the greatest asset to the success of the festival. We included people from our department (instructional technology), the communications department, and acting/theater teachers from several schools. The ideas, resources, and enthusiasm that were available from this group not only made the process move along smoothly, it also made it a great deal of fun.

3. Have the Legal Department Review Your Rules and Guidelines

This is the issue that involves protecting yourself and your district. The last thing you want to have happen is someone coming forward and claiming a video submission illegally used a photo or song. Make sure the rules and guidelines are explicit. The best way to ensure you are protected is to have your district’s legal department approve these important documents. Get them involved early so they have plenty of time to look things over and make revisions as necessary.

This really ties into the last tip, but I have separated it out here to emphasize its importance. The problem with using popular music (or any other music that is copyrighted) is that multiple entities often own the copyrights to any given song.

The songwriter usually owns some of it (which may or may not be the person on the radio singing it), their publishing company will own some of it, and their record label may own some of it as well. Trying to track down all of the copyright owners of a popular song can be quite a goose chase, and even if you are successful you may not receive permission in the necessary timeframe.

The bottom line is to make sure you discourage teachers and students from including popular songs in their videos. There are plenty of websites that provide free, as well as license-free and royalty-free music. On these sites you can find music to fit any mood or theme you might need for your video along with great sound effects. To learn more about this issue take a look at this article. 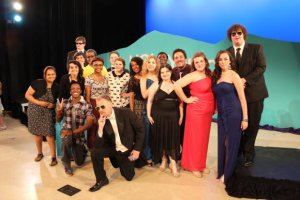 5. Involve Theater Students in the Ceremony

This turned out to be one of the best ideas we had for the awards ceremony. Since we held the ceremony at the auditorium of one of our high schools, we made sure to include that school’s theater teacher on our committee.

Not only did he offer to design and construct the set for the big event, he also had his theater students assist with the ceremony. Being actors, they were excited to play the role of screaming fans and paparazzi as the nominees stepped onto the red carpet. Several of the students even portrayed security to help keep the ravenous fans at bay. The nominees loved it. These theater students also ran sound and lights, helped manage the backstage area, and even doubled as trophy presenters in which they donned their best suits and prom dresses. Their spirited enthusiasm and energy helped make the ceremony a truly special event.

6. Tie the Festival to a District Initiative

The whole idea of a student film festival emerged from the desire of the head of our IT department to have students create more videos. There had been initiatives in the past to have high school students create commercials for things like anti-bullying and anti-texting-while-driving campaigns. The IT director wanted a way to expand this even further, hence the film festival. You will have much greater success (and greater access to funding)  if you can tie your festival to a district initiative.

Another big issue is teacher buy-in. If teachers don’t see how your festival will fit into the larger picture (the curriculum picture) they will be less likely to get involved. I would like to share again the purpose statement we created at the early stages of our planning:

“The purpose of the film festival is to encourage student creation, communication, and collaboration by providing a platform for community recognition.”

Having a purpose statement such as this lets teachers know that the festival is focused on goals that are similar to their own. 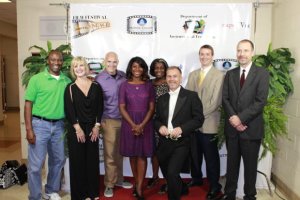 Teachers are going to be reluctant to take on a video project with their students if they are not familiar with the process. Providing workshops for teachers in which you take them through the production of a video not only gives them an opportunity to become familiar with the process, it is also a great way to promote the festival. The more knowledgeable teachers are about the ways in which video production projects can increase student engagement, creativity, and curricular understanding, the more likely they will be to produce videos in their classrooms.

Putting on our first film festival was a challenging, but very rewarding experience. We are excited about doing it again next year, and we have already started hearing from additional teachers and students who plan to participate. If you are thinking about doing a film festival in your school district, we wish you the best of luck, and we hope you are able to benefit from our experience. Lights, Camera, Engage!

This is the fourth of a four-part series on organizing a district-wide film festival: