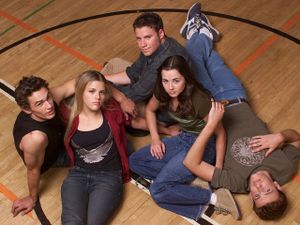 The boob tube. Electric babysitter. The idiot box. Television has been much maligned in our culture since its inception in the 1920’s and has always invoked a heated hatred in its critics. Kurt Vonnegut said that TV is “like a rotten teacher in high school, except it’s everybody’s teacher” and Frank Lloyd Wright called it “chewing gum for the eyes.”

But like most things both loved and reviled in our society, a more moderate view is probably needed. TV can, at worst, be an unhealthy obsession that wastes people’s time and gives little in return, but TV has also broken down societal boundaries, revolutionized the way people see the world, and been at the center of some of our greatest cultural moments. Characterizing TV as a place filled solely with vapid reality shows in which only the brainless indulge is a mistake. Good TV is deep, intellectually challenging, and enlightening.

It may even help to make us better educators. Check out these three TV shows that might just help us understand our students, ourselves, and the education system a little bit better.

This high school satire focuses on an often overlooked subset of student that we all know too well: the smart, but disaffected student. The show pits the brainy, titular character against an ocean of idiocy. From uninspired teachers to dimwitted popular kids to ineffective parents, Daria’s world is one that she can only react to with sarcasm, pessimism, and apathy. She’s a sort of Holden Caulfield, if Holden were a lot mellower and had better comebacks. The show’s biting wit, critique of social class, and unapologetic views make this one a must-see.

Whether you can identify with Daria’s outlook or not, this show makes the list because the reality is that many of our students feel like she does. They’re bright underachievers who can’t help but see the frequent absurdity of high school life. Rather than trying to fix  or confront it, they withdraw instead. These students are often neglected because they don’t cause much trouble, but our schools could be doing a lot more for them.

The Wire has often been called “the greatest TV show ever,” a “visual novel,” and even been compared to Charles Dickens. It deserves those descriptions. Over the course of five seasons, The Wire unflinchingly investigated the multifaceted complexities of the modern urban American city. Centered in Baltimore, Maryland, it follows cops, politicians, drug dealers, union members, journalists, teachers, and students as they struggle to survive in a system seemingly set up to maintain a low standard.

While the full series is well worth the time it takes to watch, the fourth season might be the most edifying to educators. It follows four friends and a cop-turned-teacher in a West Baltimore neighborhood middle school as they make their way through the school year. In the school, violence erupts spontaneously, the educators are jaded, and the few successes with students are overshadowed by the tremendous challenges they face. Stand and Deliver, this is not. The show portrays the inner-city school system as deeply broken and failing both students and educators. However, as with everything in The Wire, the school system is not solely to blame  - it’s just part of larger broken system. As the teacher in the show says, "No one wins. One side just loses more slowly."

Writer-director Judd Apatow is often thought of as the current reigning purveyor of fart jokes in TV and film, but don’t let that raise your nose at his first television series, Freaks and Geeks. The show follows two siblings and their group of friends in high school during the early 1980’s. We watch them struggle through adolescence, forming and reforming identities, questioning their place in society, and futilely trying to reconcile all the demands placed on them as teenagers. Oh, and did I mention that it’s laugh-out-loud funny?

Apatow’s genius has always been that he makes us sympathize with all of his characters. The bullies, mean girls, and bad teachers in the show are much more complex than the average antagonists. We come to see all of his characters as people deserving of love, trying their best to be good, even if they often fail. Few others are out there today writing with as much empathy for their characters. That empathy is infectious and might just help us be a bit more understanding of students - all students.