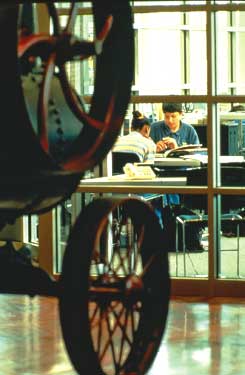 You could easily get lost in the 12 acres of exhibits at the Henry Ford Museum, in Dearborn, Michigan. Visitors can see the bus where Rosa Parks made her famous protest, the chair Abraham Lincoln sat in when he was assassinated at Ford's Theatre, and thousands of other American artifacts collected by automobile magnate Henry Ford.

At the far edge of the museum, just beyond the circular Dymaxion House, designed by celebrated architect R. Buckminster Fuller, visitors come upon what at first looks like another glass-enclosed exhibit. Closer inspection reveals classrooms where high school students study English, math, science, history, and art -- just like their peers all across America. The difference: Several times a week, these students put down their books and spread out into the museum to study, measure, sketch, and write about what they find in Ford's eclectic and extensive collections.

Students at the Henry Ford Academy (HFA) also have full access to Greenfield Village, the 90-acre site that hosts eighty-two historic buildings, many collected and reassembled by Ford.

Classrooms for the sophomores, juniors, and seniors are nestled at the back of the village between the Suwanee Lagoon, where a paddlewheel boat churns the water, and Walnut Grove, where reenactors stage Civil War battles and period baseball games. In ten minutes, students can walk to Thomas Edison's laboratory, the Wright brothers' bicycle shop, and dozens of other buildings where they can immerse themselves in America's history firsthand rather than simply reading about it in textbooks.

HFA students benefit from the acres of learning space.

The resources available to the 450 students at HFA may be unique, but the idea of integrating schools into community institutions is not. Daunted by the costs of creating schools from the ground up, school districts have begun to explore the idea of sharing facilities with local organizations from museums and zoos to health-care centers and retail outlets.

Steven Bingler, an architect who advocates innovative uses of community facilities (see the Edutopia article, Common Dreams: Turning Empty Space Into Inspiring Classrooms), designed HFA's unique campus. He estimates that construction costs at HFA were one-third of what they would have been for a traditional school. Operating costs are also lower because the academy shares expenses with the museum for a variety of services.

Henry Ford himself envisioned this kind of partnership. He believed young people could learn a great deal about American ingenuity and innovation by examining everything from toasters to tractors. HFA principal Cora Christmas shares this philosophy. She started as a math teacher and recalls that students were often confused when they learned theory first (finding the size of a particular area, for example) and then were asked to apply it to word problems about the real world. "Here, we reverse that process," says Christmas. "We start with something real that students can touch and examine, then we extrapolate the theory."

In an economics course, for example, social studies teacher Michael Flannery doesn't lecture about the impact of industrialization. Instead, he takes his students to Daggett Farm, an eighteenth-century homestead on the property where they dip candles, create linen from flax, and plow fields behind a team of oxen. "By the end of the classes," says Flannery, "students have a deep understanding of how technological innovations changed everyday life."

Experiences like these are possible because of collaboration between a world-class cultural institution, a global corporation, and a school district eager to innovate. In the early '90s, the staff at the Henry Ford (as the museum and village are known) wanted to offer young learners something more than superficial exposure to the collection during field trips. The Ford Motor Company, for its part, was looking for educational initiatives to inspire the next generation of scientists, engineers, and technical workers. And the Wayne County Regional Educational Service Agency (Wayne RESA), responsible for educating 400,000 students in thirty-four districts, was willing to try new ideas.

All those interests converged almost by accident during a luncheon meeting in 1995 at which Henry Ford President Steven Hamp, Ford Motor Company executive Renee Lerche, and Michael Flannigan, superintendent of Wayne RESA, began discussing the possibility of embedding a school in the museum complex. Lerche took the idea back to Ford, which agreed to invest $6 million to get the project under way. By 1997, the academy was admitting a ninth-grade class.

"For the first few years, it was a rush job to renovate the next buildings," recalls Christmas. For example, a roofless round structure that once housed a carousel was transformed into a student center with a vaulted ceiling and large, high windows. Classrooms for the senior class were created in a former railroad depot and three railroad cars, which, at the suggestion of a teacher, were joined together to create a unique learning environment.

The process of developing curriculum at HFA was far less improvised. "Our original vision was that the kids would be in the museum and village all the time, but logistics made that impossible," says Christmas.

Like other public school students in Michigan, HFA students must pass the state's proficiency test, so they needed competence in core areas. "There are key bodies of knowledge kids have to master, and there's only a limited amount of time to teach," continues Christmas. "We decided to use the museum and village strategically so those experiences would have maximum impact."

For example, freshmen learning to use graphing calculators interview museum visitors about their favorite exhibits and then graph the statistics they've gathered. For a junior-year biology project, students research agricultural methods on the two working farms in the village and use what they learn to design a farm that could function on Mars.

To give teachers adequate time to integrate lessons like these, the school day is organized into ninety-minute blocks. Lessons are kept engaging through a patchwork of teaching strategies, using film clips, discussions, group work, experiments, Internet research, and other learning activities. Students are often expected to create products (journals, Web sites, PowerPoint presentations, scale models, exhibits, and the like) that will help them process what they've learned and demonstrate what they know to peers and teachers.

Christmas also believe students derive intangible benefits from their unusual educational setting. For one thing, she's noticed that HFA students are more comfortable with adults, in part because they eat in the employee lunchroom, where they mingle with curators and other museum staff. "They come in as freshmen, all shy and unable to make eye contact," she notes. "By the end of the first year, they are very confident when talking to adults."

On more traditional measures of performance, HFA scores high. Its student-retention rate is especially strong. HFA scores on standardized tests are as much as four times higher than those of other Detroit schools, and 86 percent of the most recent graduated students were accepted at four-year universities.

The assets available to the Henry Ford Academy are not available in every community, yet this model can inspire other school districts to look at local institutions with new eyes and imagine classrooms in settings where they've never been before, as was done recently in New Orleans, which will incorporate a new school on the grounds of the Louisiana SuperDome. If the academy that bears his name inspires that kind of innovation and ingenuity, one can't help thinking Henry Ford would be proud indeed.

Carolyn Jabs has been writing about families, learning, and technology for more than twenty years. She also writes the column Growing Up Online. Write to crjabs@aol.com.