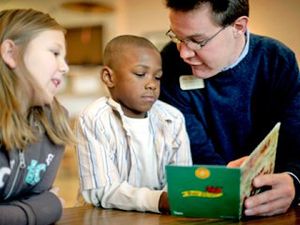 The Metropolitan School District of Lawrence Township, in the northeast corner of Indianapolis, feels the same kind of growing pains that test many districts across the country. Housing subdivisions are swallowing up the farms and factories that once dotted the landscape. Each year, its students are more ethnically diverse and more wired to the outside world. As fast as its students change, so do the opportunities and challenges they will face in the future.

Seven years ago, Lawrence Township decided to reinvent itself for the modern age -- a daunting task to undertake at the district level, particularly in one with 16,000 students. Working with teachers, administrators reshaped the curriculum around what they call digital-age literacies -- skills such as critical thinking, self-direction, cultural competency, and technological fluency. To engage modern kids and prepare them for the lifelong learning the wired world requires, teachers needed to personalize lessons, shape them into meaningful projects, and put students in the driver's seat.

In early 2007, Edutopia visited Lawrence Township to see the overhaul in action. (Here's the full story.) With a $5.9 million grant from the Lilly Endowment, a local philanthropic organization, the district had turned veteran teachers into digital-age literacy coaches -- thirty-three of them for the first three years, and half that number for the following two. The coaches worked one-on-one with teachers to help them plan lessons and hone their approach to project learning. Secondary schools had carts of laptops available for students' use. The district had also built a Web site with personal pages for teachers and students and online professional-development courses.

Still, the transformation was patchy. The number of teachers adopting the new methods ranged from 80 percent at some schools to just 20 percent at others. Another threat loomed large: That summer the Lilly grant would end, and with it the coaching that had been the engine of change.

Happily, digital-age instruction has survived in Lawrence Township. In the past year and a half, the district has sustained its effort -- using strategies other school systems could replicate even without a multimillion-dollar grant. The district pays for two project-learning coaches who devote half their time to the Harrison Hill School of Inquiry, an elementary school that reopened with the new name and an all-inquiry approach in 2007. The coaches use the other half of their time to reach out to other schools.

Administrators are targeting elementary schools, aiming to permeate the early grades with modernized teaching and then work up to middle schools and high schools. They hired project-learning experts Sylvia Chard and Lilian Katz to train half of the district's 500 elementary school teachers, plus 50 secondary school teachers, over the past year. Chard and Katz are also working with principals to support teachers to sustain the new approach.

Bucking tradition might seem like a stretch as districts strain under the traditional demands of the No Child Left Behind law. But Lawrence Township is proving that it's possible.

"We care about test scores, but it's not about language and math to the exclusion of everything else," says Superintendent Michael Copper. "Readiness for life is a whole different pursuit than readiness for the test."