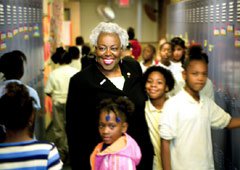 Paula Dawning knows a tough gig when she sees it. She set international sales strategies as vice president of AT&T's Global Markets Division, managing dozens of staffers for the telecom giant and handling an annual war chest of $600 million.

Today, however, Dawning's office is smaller, her budget is 10 percent of what it was, and the people outside her office are more likely to wear droopy jeans and baseball caps than crisp suits or skirts.

Dawning is superintendent of the Benton Harbor Area School District, in Benton Harbor, Michigan, an economically depressed region deep in the rust belt. The town was once home to thriving foundries, boatyards, and appliance factories, but many of those jobs have evaporated, and annual salaries average just over $17,000.

Instead of managing global sales forecasts, Dawning oversees twelve financially pressed schools with 4,700 students, many of whom are from low-income families and are academically struggling. "In some ways, it's much tougher than AT&T," she says. "But at the end of the day, I know we can also accomplish great things."

Dawning is one of dozens of former top-tier business executives who tired of the hamster wheel of corporate America and now use the organizational and operational skills they honed in a corner office in a high-rise to improve struggling urban school districts. They're all graduates of the Broad Superintendents Academy, a nonprofit organization designed to bring the best business-management practices to public schools.

The Superintendents Academy was founded in 1999 by Eli Broad (pronounced "brode"), the seventy-two-year-old son of Lithuanian immigrants who made his fortune (estimated by Forbes at $6 billion) as head of Kaufman & Broad Home Corporation, now K. B. Home, which builds tract homes in the United States and Europe. The academy is a subset of the Los Angeles-based Broad Center for the Management of School Systems (part of the Broad Education Foundation), which is designed for professionals from all walks of life to go for a second career -- in public education.

Since the first class graduated in 2002, the Superintendents Academy has radically changed the pool of potential superintendents nationwide. So far, eighty-one have graduated and twelve have been appointed as superintendents in large urban districts, including those in Pittsburgh, Houston, and Montgomery, Alabama. In the search for the head of the Charleston, South Carolina, public school system in 2004, all three finalists were graduates of the program.

Many seasoned pros step away from the business world with a simple goal: Power down and leave eighteen-hour days behind. Not Broad grads.

"We're looking for a highly charged person who wants to apply that energy in a different way," says Becca Bracy Knight, managing director of the Broad Center. "We want a person with a history of getting results." Most importantly, prospective school leaders need to have skills managing large organizations and motivating people. "We see a lot of examples of excellent individual schools," notes Bracey, "but we rarely see systemwide success. That's what we're after."

The chance to make a big difference is what attracted Joseph Wise to the job. Wise knows a big bureaucracy when he sees one, having spent several years in senior positions at the Walt Disney Company. Today, he heads the Duval County School District, in Jacksonville, Florida, the nineteenth-largest district in the nation, with about 130,000 students and 165 schools. "Bureaucracies are the same, whether they're private businesses or public schools," says Wise.

While participating in the ten-month training program, Broad Fellows retain their current job, attending a series of intensive sessions held throughout the country over several weekends. There is no tuition, and all expenses are paid by the foundation, an estimated cost of $40,000-$45,000 per person.

The curriculum emphasizes the need to take successful corporate strategies and apply them to the world of public education. Training is filled with case studies and real-world challenges, such as passing bond issues, working with crumbling facilities, and maintaining an emphasis on student achievement and fiscal accountability.

In 2001, only 39 percent of fourth graders in Dawning's school district were reading at or above state targets. Last year, that number shot up to 77 percent. Similarly, math scores also rose: Nearly three-fourths of fourth graders were hitting state standards last year, up from 46 percent in 2001.

"Broad grads get things done, no question," says Dick Loveall, director of executive search services at the California School Boards Association, which fills high-level positions at schools throughout the state. "At a time when we really need to reinvent what public schools are, Broad has brought in a lot of fresh voices and begun conversations about what education is and could be."

It's not only test scores the supes worry about. In Dawning's district, no new school has been built in more than half a century. Maintenance costs were high and buildings were crumbling. Dawning helped passed the district's first school-related tax issue in seventeen years; the levy raises $1.3 million per year for maintenance improvements. "If we don't have the proper school environment, how are we going to get these kids to learn?" she asks.

Despite the promise of a position that is always public and frequently frenetic, however, the fellowship is a tough gig to get. The selection committee looks for creative and entrepreneurial leaders with professional experience within a complex organization, not just desk jockeys. This year, only 7 percent of the applicants were accepted.

"People who get here want to be here," Dawning adds. "But I truly believe what I tell my students: Have a big dream. Small dreams don't inspire. Only big dreams will make a difference."