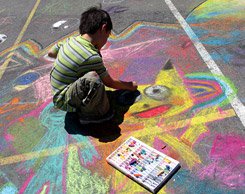 The Kids' Chalk Art Project is a child's dream: Getdown on the ground, draw all over it, get messy, andwhile you're at it, set a Guinness World Record.

For project founder Mark Wagner, a local artist anddad, the dream is less tangible but just as inspiring: to stokechildren's creativity and demonstrate to the world what kidscan do. Ultimately, he wants the spectacle of the world'sbiggest chalk drawing, created by children, to spawn a commitmentto art classes in the elementary schools of Alameda,California, and beyond.

"Kids grow up unconnected to their creative spirit,"Wagner says. Giving kids a chance to do art, he believes, tapsthe vein of their elemental creativity -- a force that will helpthem learn, interact, work, and play throughout life.

Elementary schools in Alameda, an island city on San Francisco Bay,haven't offered formal art instruction for years. The schooldistrict's Parent-Teacher Association provides materials to"art docents," parent volunteers who do periodic art activitieswith students. But in schools and classrooms without availableparents or teacher buy-in, the kids get no art instruction.

Nationwide, such instruction has declined under pressureto emphasize subjects tested under the No Child Left BehindAct, and the impact has been severe in elementary schools.A survey released in 2007 by the independent Center onEducation Policy found that since the law passed, 44 percentof districts have cut time in the elementary grades fromuntested subjects. (These cutbacks average nearly thirty minutesa day.) Even before NCLB, tight finances had squeezedout the arts in some schools.

Wagner's ambition is for local kids and adults this spring tocover a 100,000-square-foot swath of pavement at the decommissionedAlameda Naval Air Station with one seamless, communalchalk drawing. Kids will draw in shifts over two weeks,culminating June 7 with a festival anda satellite photo of the finished creation,to be used to promote children'sart worldwide. The event will also markthe launch of Wagner's nonprofitorganization, Re-Enchanting the WorldThrough Art, dedicated to supportingelementary school art programs.

The Guinness World Record tobeat is a chalk drawing measuring60,439.3 square feet, made by morethan 700 volunteers for an event inEeklo, Belgium, in 2006. That's asquare measuring more than 245feet on each side.

"If people can see that kids aredoing it -- kids with no art teachers -- imagine what they could do with regularinstruction," Wagner says.

Among kids, Wagner's inspirationis infectious. When he visited EdisonElementary School in December togive students a pep talk for the project,the kids burst out with exclamationslike "Awesome!"

The second and third graderspounced on the ground and quicklylaid down thick layers of chalk in brilliantyellow, green, and magenta.

"I'm drawing a big one!" one girlsaid.

The teachers got their hands dirty,too -- Wagner insisted.

Principal Marcheta Williams saysshe jumped at the opportunity toinvolve her students in the project.She's also working on a districtwidetask force to bring more arts into theschools -- the first step being the hiringof two art teachers this year.

Williams, who is also a jazzpianist, explains, "When I was a kid, Ididn't think I was good at anything,and then I discovered that I was goodat music, and I was able to transferthat to everything in my life."

For now, Wagner is at least$100,000 away from making hisdream come true. He needs to pay formarketing, security, chalk, satellitephotos, and his own time. Other parentsand community groups are helpinghim plan and raise money.

"Being intuitive and being creativewill be one of the most valuableassets in the future for hiring andhelping to solve the world's problems,"he says. "So you put that intokids, and that's how you invest in theworld."