Solution: Make student academic improvement an offshoot of improved instructor support; show that classroom instruction can be improved across the board if teachers have more professional-development opportunities, chances to collaborate, and personnel who can serve as personal and professional resources. 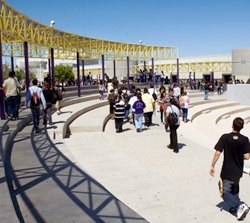 In an era when the stringent demands of standards-based education cause many high-poverty, high-minority public schools to feel crushed, the Central Union High School District (CUHSD), in El Centro, California, has persevered -- and excelled.

The blisteringly hot desert town, a nearly two-hour drive east of San Diego, is just 10 miles from the Mexican border. Almost 90 percent of the district's 4,246 students are Hispanic or Latino, more than half are eligible for free or reduced-cost lunch, and just less than one-third are classified as English-language learners (ELL). In 1999 and 2000, test scores in the district were the lowest they'd been since the advent of standardized testing, and morale was flagging.

But a concerted effort to improve classroom instruction -- through extensive staff professional development, support for and collaboration between teachers, and a continual emphasis on the needs of each student -- has boosted student performance. Both of the district's main high schools, Southwest and Central Union, shifted from Program Improvement status to California Distinguished Schools recognition in 2005 and 2007, respectively. (Schools that fail to maintain Adequate Yearly Progress are identified for Program Improvement status; the Distinguished School Award honors the state's most exemplary and inspiring public schools.)

It wasn't easy. "We were forced to take a very hard look at ourselves," says Emma Jones, retiring principal of Central Union High School. "We looked in the mirror and said: 'OK, this is where we are. Where do we want to go? What are the barriers? What do we need to do to get there?'"

In 1999, the district volunteered for the Immediate Intervention/Underperforming Schools Program (II/USP), hosted by the California Department of Education, a process that provides financial resources to struggling schools over a three-year period. (The district has received a fourth year of funding.) Through a state-run program called Comite and a partnership with WestEd (a nonprofit research, development, and service agency), and with a focus on ELL students, they began the deliberate, painstaking process of self-evaluation.

To do so, they monitored classroom instruction and used hard data and vetted educational research to create student-focused instructional strategies. They created an allotment of biweekly collaborative time for teachers and invested in academic coaches, whose job is to support teachers personally and professionally along the way.

Thanks in large part to these efforts, the district's Academic Performance Index rose more than 130 points from 2001 to 2006 -- from far below basic to exceeding the state median -- and the numbers of ELL students dropped several percentage points due to the successful reclassification of students as fluent in English. Ninety percent of CUHSD graduates now attend either community college or a four-year university, and both Central Union and Southwest high schools were showcased in the National Center for Educational Achievement's 2004-05 round-up of best practices.

"The idea of continuing to provide support to teachers in the classroom is really what the success of this district is all about," says CUHSD superintendent C. Thomas Budde, who notes that "key people in key positions" -- two academic coaches and three program-improvement resource teachers -- have been vital in improving classroom instruction districtwide. 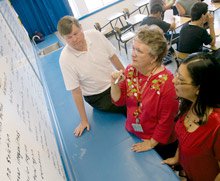 A shift in 2008-09 will bring one academic coach, two program-improvement resource teachers, and one English-language resource teacher. Also, several classroom teachers will be given an extra prep period to be used to support new teachers. "Teachers have a lot on their plates," says Tricia Petter, program-improvement resource teacher and former English teacher at Central Union High School. "I think what this position does is enable teachers to say, 'I really want to be able to do this, but I don't have the time to put it together. Can you research it for me? Can you find the programs that will make this run better?'"

"I truly believe that if a teacher is in need of something emotionally, the kids are going to be the ones who suffer," says Marilyn Burt, academic coach at Central Union High School. Having someone there to help, whether it's with state standards, classroom management, or personal issues, not only helps teachers do their job better but also "makes you feel at home," says Southwest High School English teacher Christopher Spanos. "Someone cares about you."

Having resource teachers on tap also means that research-based instructional strategies, customized for individual educators, make it to the classroom quickly. With a focus on individuals, the district can send a handful of teachers, or even one, The Educational Testing Service's Assessment for Learning Institute or Ruby K. Payne's A Framework for Understanding Poverty training (based on her book of the same title). The approach costs less than sending every teacher in the district, and the professional-development gains are greater.

"I can't even tell you how many days I've spent this year just in workshops with teachers," Burt says, laughing. "A lot!" In addition to scheduled staff-development days and afternoons, she adds, "we give workshops after school, during prep periods, during lunch -- any avenue we can find."

Many of these workshops and trainings target ELL students. Although the district has a variety of programs in place -- English-language-development classes, structured English-immersion classes, and bilingual classes -- ELL students attend classes not specifically designed for them. Though roughly 30 percent of students are classified as ELL, district surveys reveal that nearly 70 percent of students speak a language other than English at home. It became clear that in order to serve all students, the teachers need to regularly employ instructional strategies and conceptual frameworks that prioritize academic-language acquisition.

A workshop created by Marilyn Burt, for instance -- called Language Is Power and based on the work of such educational theorists as Kate Kinsella, Maria Montano-Harmon, and Payne -- is now not only offered to all teachers as professional-development training but also is part of the ninth- and tenth-grade curriculum. Teachers go through the workshop and then discuss the concepts with their students, concepts that include public and private voice, language registers, and discourse patterns.

"It's nice to get a view of the big picture, because we're all focused on the math," says Mike Becker, a math teacher at Southwest High School. Through training with resource staff, his department now knows that "academic vocabulary is something you stress in a math class. If a kid can't understand the question, that automatically means they can't solve the problem, whether or not he or she is mentally capable of doing it."

Prior to the II/USP process, says Burt, "English learners were never our focus. Now, we've really put them front and center."

Every other Wednesday, students leave campus at noon, and groups of teachers of the same subject meet together for two hours of structured collaboration. Before the II/USP process, "we had some collaboration time, but it wasn't focused collaboration time," says Central Union High School principal Emma Jones. "This is focused."

In addition to the benefits of mutual support and the free exchange of lesson plans and activity ideas, structured collaborations help align district goals and develop a common vocabulary of best practices.

The topic at hand is common assessments. CUHSD teachers are working with district administrators and each other to formulate fair, accurate, streamlined, and comprehensive assessments. Teachers discuss how they construct a test and what it should include and collaboratively delineate the specific standards they want their students to meet.

"Traditionally, assessment was something that teachers did individually," says Southwest High School principal Danette Morrell. "They did it in their own classrooms, they wrote their own tests, and it was as varied as ice cream selections."

Now, CUHSD assessments are as targeted as classroom instruction is, and teachers, knowing what's expected of them, are coming up with these assessments together. "If something can come from the teachers up, there's a lot of buy-in for that," says Martha Hoopes, an English teacher at Central Union High School. The focus on targets and goals, many teachers report, has been a boon for both them and their students.

"It seems to me we didn't used to say, 'This is what you're supposed to know when you leave this class today,'" says Darcel Putnam, special education teacher at Central Union. "Now that's explicit."

"It's more targeted instruction, more targeted assessment," adds Tricia Petter, "so the reteaching that's able to be done is more strategic. That is what has helped us get where we are. We know in great detail what the students need help with."

As with any major reform effort, the change here took time. Strategic collaboration districtwide is not something that happens overnight, nor is it ever finished. Ultimately, district staff contend, any progress is based on an ongoing commitment to the students they are serving.

"Teachers always say, 'Come in after class, come after school, come in the morning,'" says Central Union High School senior Jezreel Ontiveros. "They always arrange their schedule to fit your needs." After-school tutoring programs and a very robust Advancement Via Individual Determination program (AVID), a system that prepares underserved populations of students for four-year universities, for example, encourage students to excel and promote the district's pervasive college-going atmosphere. According to Southwest High School junior and recent immigrant Raul Carmelo, the biggest difference between his experience in school in Mexico and his time in the district is the personal attention he receives from his teachers.

"I think we know who our kids are," says Anabel Rodriguez, an ELL-program resource teacher who's also a graduate of Central Union High School, the youngest of twelve children, and the first in her family to go to college. "We know where they are coming from and know the obstacles that they're facing." Still, she adds, "every kid wants to learn, wants to succeed. Our job as teachers is to do what we can to make sure that happens."

Go to "How to Increase Student Achievement."