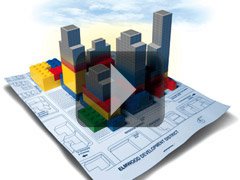 The Elmwood district, in the city of Yorktown, is dying. Once home to a prosperous middle-class population, the area is now the scene of classic urban blight.

Most of the residents have fled to the suburbs, neighborhood businesses are gone, and ever since a fire decimated the commercial heart of the district several years ago, virtually all that's left are abandoned buildings and overgrown vacant lots. Crime is rampant, jobs are nonexistent, and if something isn't done quickly, Elmwood's malaise will contaminate nearby neighborhoods. What is a city to do?

If your answer is, "Call in super-motivated teams of high school kids," you score a bingo. Under an innovative program called UrbanPlan, some 3,000 students in economics and government classes around the country have had a crack at rehabilitating the fictitious Elmwood. From the buzz generated by the youthful participants and their teachers, it's starting to look like one of the coolest things going in the classroom.

UrbanPlan is an academically challenging, classroom-based, 15-hour study unit in which teams of high school juniors and seniors compete to land the redevelopment contract for the decaying district of Elmwood. By taking on such real-life roles as site planner, financial analyst, marketing director, and neighborhood-to-city liaison, team members learn firsthand the nitty-gritty intricacies of urban renewal. Because the goal is to make a profit in the process, there are also some hardcore lessons in financial reality.

"It's a balancing act in real time under real-world conditions," says Paula Blasier, director of San Francisco-based UrbanPlan. The program was developed by the Urban Land Institute (ULI), based in Washington, DC, and the Fisher Center for Real Estate and Urban Economics, at the University of California, Berkeley, with input from high school government and economics teachers. "The kids stand in the shoes of people who have conflicting interests -- the architects, finance people, and developers. And they have to come up with a design plan that takes into account the concerns of all the stakeholders while delivering a decent return on capital to their investors and the city," says Blasier.

This goal requires the students to address such diverse issues as affordable housing, transit needs, open-space beautification, historical preservation, and the district's retail requirements. Each team member researches an assigned area, then reports to the group. Once a project plan is hammered out on laptops, the teams construct a preliminary model of their design out of Legos and then go before a "city council" of volunteer land-use professionals to pitch their project. After a detailed grilling, students tweak their product for a final presentation. The "contract" is awarded to the students who produce the most responsive and compelling vision for Elmwood.

"The team approach is the most crucial element in the program," says Steve Teel, who teaches a government class at Berkeley High School, in Berkeley, California. Teel, a 35-year veteran of the classroom, helped develop UrbanPlan and has taught it for three semesters.

"Each role on the team must be done properly, and the kids have to collaborate to find consensus," he says. "They learn the important skills needed to work in a group -- how to listen to others, how to pull the weaker students along so they can all succeed. They want to win that contract so badly, they even dress up to give their presentation."

The ULI, dedicated to the promotion of smart growth in civic development, commissioned UrbanPlan to get more young people engaged in the development process. The U.S. population is forecast to grow by 60 million people in the next 20 years; the better informed the population, the better we'll be able to handle the crunch.

"We're going to be called on to make really important decisions in this area, and nowhere in education are we taught about the forces that come into play," says Blasier. "We wanted to provide the most realistic experience possible, but we also wanted a model that could be embraced by public schools nationwide. We knew we had to make it not only engaging for the kids but teacher friendly as well."

When a school agrees to offer the UrbanPlan curriculum, local representatives of ULI step in with full support, including all curriculum materials, as well as teacher training and the recruitment of volunteer professionals such as architects, developers, and city planners to act as classroom facilitators. Because some teachers are reluctant to devote so much class time to a project, however, care is taken to see that UrbanPlan conforms to state and national content standards for high school economics.

"I had some resistance, because I wondered how in the world I'd fit the program in and still get my kids prepared for testing," says Sally Finch, who teaches economics at the Westminster Schools, in Atlanta, Georgia. "But I discovered that the students were much more prepared after this course, because they had the capacity to take economic principles and apply them in a real-life situation. The kids appreciated that it was hands-on stuff and that they were dealing with real professionals."

For Clarissa Bushman, an economics teacher at New York City's Stuyvesant High School, UrbanPlan was an antidote to that old bugaboo, senioritis.

"I have an odd rhythm to my second-semester AP economics class, and the result is that my kids are fine until the AP exam -- then they're ready to quit," says Bushman. "UrbanPlan was suggested as a good solution to the problem, but, truthfully, I was concerned that they wouldn't take it seriously. I was pleasantly surprised by the energy and enthusiasm they showed, and I attribute that to the presence of the professionals in the classroom. The kids really got motivated when the professionals came in to critique them."

All team members are required to participate in the presentation, with each one allotted a set amount of time to speak. "The kids were understandably nervous to talk in front of the pros," Bushman says, "but I told them, 'Look, pitching is what you do in business -- it's what it's all about.' Two things that are absolutely essential, not only in business but also in life itself, are that you have to know how to talk and you have to learn how to work in groups. That's the real benefit of this program."

Most teachers who use UrbanPlan agree that the professional facilitators, who receive a full day of training, are the key to its success.

"They do this because of a deep belief that it's our responsibility to educate our kids to be good citizens," says Blasier. "Their job is to be neutral, but to really challenge the students. And they don't sugarcoat the politics involved. They'll say, 'Okay, where's the Q-Mart? They donated a lot of stuff to this project, not to mention my campaign, and you've got to give me a good reason why they're not included.'"

Such crass horse trading comes as a shock to some kids, but the program is designed to teach the benefits of resolving conflicting interests. For Sofia Haas, who participated in UrbanPlan as a senior at Berkeley High School last year, the rough-and-tumble political trade-offs were an eye opener.

"At the beginning, we all had this sort of ultra-left-wing Berkeley mind-set, so we were really concerned about having affordable housing and options for low-income people," says Haas, now a freshman at Swarthmore College. "But then reality set in, and we had to consider the profit aspect, which meant we had to include some luxury housing and a big grocery store. It was definitely challenging to have to make a profit on our product and try to keep true to our beliefs. But those are the problems that face people who do this in the real world."

One aspect of UrbanPlan that surprises teachers is that their less outstanding students often excel in the program. "Of course, the smart kids generally do well, but it's not always the student with the best grades who really shines, because human skills are so essential," says Blasier. "All of a sudden, a kid discovers a whole new world, maybe even a possible profession, that requires a skill set they thought had no value."

Even though Haas doesn't have plans to enter the development profession, she strongly believes the UrbanPlan experience expanded her vision. "I came away with a whole new awareness of all that goes into a project like this," says Haas. "I mean, you think of doctors and lawyers and how they do their jobs, but you don't normally think about the people who design the streets you walk on. Now, I always look around and try to notice all the little things that you take for granted that can really make a neighborhood come alive."