At the recent U.S. finals of the Imagine Cup competition, student teams from across the country showed off not only their technical brilliance but also an eagerness to improve the world through gaming and software development. How so? How about using a portable device to help visually impaired students with note-taking, or a digital strategy game that challenges children to improve the environment through clean energy, or a game for your smart phone in which players fight deforestation to earn points.

Credit: Imagine Cup
Gamer guru Jane McGonigal, who was keynoter for the event. 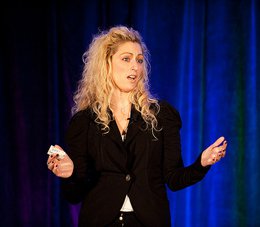 Credit: Imagine Cup
Gamer guru Jane McGonigal, who was keynoter for the event.

Those three winning projects were selected from a pool that started with 74,000 entrants from high school through graduate school. That's a new record for the Microsoft-sponsored event, now in its ninth year. Theme for this year's event: Imagine a world where technology helps solve the toughest problems. That means projects have to use technology to address the United Nations Millennium Development Goals which include reducing poverty and hunger, improving access to education, and ensuring environmental sustainability.

"This age group -- the Millennials -- seems to put a higher value on being of service to a larger cause than previous generations," says Jane McGonigal, celebrated game designer who was keynoter for the Imagine Cup awards ceremony on the Microsoft campus in Redmond, Washington. "Combine that with their interest in technology and love of gaming, and it seems like a powerful one-two punch that will escalate the quality of serious projects."

Although global problems are plenty serious, the solutions emerging from this crowd tend to be playful and optimistic. Imagine Cup projects don't have the same feel as many of the games that are marketed as "educational," and which tend to put learning goals before good game mechanics. "A lot of (educational) games lack fun," one team frankly told the judging panel. Their approach instead was to emphasize "learning by accident." The team from Tribeca Flashpoint Academy that developed the award-winning environmental game (called Spero, Latin for "hope") did user testing with third- and sixth-graders. They found that a full-on gaming experience -- with all the challenges, visual feedback, and fun that gamers expect -- also leads to learning. Once the game got kids engaged, the team told judges, "they wanted nothing less than to save the world."

That approach gets a nod from McGonigal, author of Reality is Broken: Why Games Make Us Better and How They Can Change the World. Overall, she says she found the caliber of entries at Imagine Cup "very impressive. These games are fully playable, very polished, very much real games. None look or feel like games designed just to teach you something. Obviously," she adds, "they were designed by young people who've grown up gaming."

In her own approach to game design, McGonigal adds, "I like to think of every game as a solution to a problem. I want to make a game that changes how somebody thinks so it will change how they act, vote, or engage with the world around them. To focus on impact and not just content is the big innovation we're seeing now in game design."

Insights for the Classroom

During a showcase event, I had a chance to talk with several teams about their projects. Their insights offer good advice for anyone engaged in problem solving, teamwork, idea generation -- in other words, for anyone doing project-based learning. Here are a few nuggets of advice:

Do something real: The idea behind NoteTaker, the prize-winning entry in the software design category, started with a real problem. David Hayden, a visually impaired student at Arizona State University, was having trouble keeping up in his advanced math courses. He understood the concepts but struggled to see the board where the professor was writing problems. So he stopped by the Center for Cognitive Ubiquitous Computing, better known as CUbiC, and asked for help. "I told him, how about we give you a desk and help you work on a solution?" recalls John Black, who teaches in the School of Computing and Informatics. "Eventually, a team formed around him."

The first team members -- from computer science and engineering -- used readily available materials, such as camcorder and tablet computer, to devise a prototype that would meet Hayden's needs. Eventually, an industrial design student joined the team "and designed something that looks like a real product, not something a bunch of engineers would put together," says team member Michael Astrauskas. Hayden, who began getting A's in advanced math classes as soon as he had a working prototype, is now a graduate student in computer science. "We have 100 volunteers waiting to test this product," adds Astrauskas, "and a third of them have no visual impairment."

Be passionate: Designing innovative, potentially world-changing projects takes persistence. "You have to have passion for what you're doing," says a student whose team has developed a mobile app to help community health workers improve patient care in the developing world. "It's not the idea that's hard -- it's the execution," he adds.

Think globally: Wilson To, a student at University of California at Davis and also a Gates Millennium Scholar, was on the team that won the U.S. finals of the Imagine Cup last year and went to Poland to compete in the international competition.

Learning about the issues that students from other countries were tackling "opened my eyes," he says. "This year, I wanted to work on a global issue." He recruited team members with diverse backgrounds to develop LifeLens, software that uses a mobile phone camera to diagnose malaria in the field. It can be combined with mapping software to generate real-time maps of malaria outbreaks, which could make response more efficient and effective.

Focus on the positive: The youngest competitors at the event were two students from Lick-Wilmerding High School in San Francisco. Xander Masotto and Julius Lee developed a strategy game called Strain that challenges players to defend the world against a global pandemic. Their idea came from other games that unleash pandemics on virtual worlds. "We thought, what if the goal was to save people instead of killing them?" Masotto says, explaining how they decided to put a positive spin on the issue of global health.

Their project involved extensive research into everything from pandemics to world geography, not to mention programming and graphic design. It all took place outside regular school hours. They'd welcome a move to bring game design into the classroom as a springboard for active learning.

The final round of the Imagine Cup takes place in July in New York, when competitors from around the world will compete for prizes -- and a chance to introduce their world-changing ideas to a global audience. You can read more about the Imagine Cup projects.

How are your students using technology to improve the world? Please share your stories.