A whole new trend is about to explode in the educational app world. You may be familiar with the new tech that allows for apps to interact with tangible objects. This enhanced interactive technology is undoubtedly one that will change educational apps as we know them. Soon, the pairing of augmented reality with extensive curriculum guides will be commonplace in the classroom. Indie developers are producing a wide range of products that focus on spatial awareness, language development, number sense, problem solving, and motor skills, as well as an introduction to literacy, math, and the sciences.

What I find most exciting about this trend is the ability to get manipulatives back in the hands of children while simultaneously allowing them to interact with digital tools. As an educator, I'm relieved to know that learning through virtual technologies is able to occur in conjunction with physical play, all while fostering creativity. Suddenly there has emerged a balance between digital play and physical, imaginative, and cognitively engaging play. Kids have always learned best when they have the ability to engage all of their senses during play. The most powerful learning happens when the integration of body, mind, and brain are incorporated simultaneously. Promoting active learning can teach and model concepts and skills; children can then generalize those skills into real-time experiences and their daily routines off-screen.

The Future Is Here

In preparation for writing this post, I accepted an invitation to be a presenter for Career Day at my local elementary school. The program was structured with 20-minute blocks of approximately 25 students per session. Knowing that this was for the primary grades, I planned my presentation around a five-minute introduction and a 15-minute visit to one of the five stations I had set up. Both my avatar and the home page of my website were posted on the Smart Board to keep students' attention until they all settled in on the rug.

First, I explained that I was a former teacher and that my new career was all about playing apps and helping make them better. I asked if anyone had heard of "augmented reality," and surprisingly, I found that only one out of the 75+ kids was familiar with the term. He explained that he thought it was when your imagination brought things to life. Close enough! I then introduced the book Powerful Plants and passed out a few seed packets. When I held my iPad up to the sunflower seed pack and the character came to life, the kids all gasped, "It's magical!" I had them just where I wanted, ready and eager to learn. 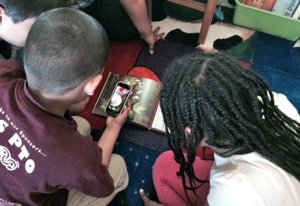 After a brief explanation that "the future is here," I asked them if they wanted to play games. Of course, they all said, "Yes!" With little to no instruction, the kids dispersed around the room and began to play with the pre-selected apps on each iPad.

I had one station for the Powerful Plants augmented reality, and the kids got into the book without my help. This included answering a series of questions that they figured out how to do on their own. Another station had the Chef app by Tiggly, which interacts with five Cuisenaire-like counting rods and allows students to "take cooking classes" while building vital math skills. You use the counting rods to measure the appropriate quantities of ingredients for a specific yet very silly recipes, and then -- ta-da! -- you are able to create a finished culinary kids' delight. This app really is the icing on the cake! Tiggly promotes real-life circumstances with avant-garde creativity in all their products.

Another station included Marbotic, a company based in France and following Maria Montessori's theory that learning should be child centered. They have taken the traditional wooden number puzzle and wonderfully recreated it with a new twist by adding a digital tech component. Two different apps worked with the same Marbotic number puzzle, and two groups shared the pieces. The first, 10 Digits, familiarizes children with numbers and counting. The second, Up to 100, contains six different exploratory activities using place value and the written word. Their newest app, More or Less, just released the beta. 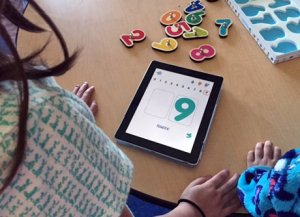 Letter/Word play was set up at two different stations, and my only assist here was showing students the diverse levels of play. These literacy stations had one app from Tiggly called Tiggly Words and the other from Marbotic called My ABC. (Both are still in beta.) Later on, one teacher inquired about whether the apps are available in Spanish, and with the flick of a few settings, the language switched and dual-language students carried on without a second thought. The teacher was awestruck with both the ease of rendering this transition and the choices of different languages available.

Those 15 minutes flew right by, and before I knew it, the loudspeaker was interrupting us with instructions for changing to the next session. This same scenario was repeated five times throughout the morning. As I glanced around the room, I saw a sea of smiling students, immersed in playful learning. When each group was lining up, I asked the same question, "Can you give me any suggestions to make these games better?" Suddenly, you could hear a pin drop. You could feel wheels turning, light bulbs burning, and brain synapses firing. It was what every teacher hopes for, that perfect moment when you have instilled analytical thinking.

I did not refer to any of these physical items as toys due to the misconception by some that toys aren’t for learning. Have I missed any apps paired with physical objects that you are using at school or at home? What else should we be considered? Please tell us about it below in the comments.