By objective measures, our young people are more anxious, more depressed, and have more psychopathology in general than students did a few decades ago. This has important implications for educators, school administrators, and society at large. What if our traditional school systems are unwittingly contributing to the problem -- and what if a relatively simple practice could help?

As we are all well aware, the current educational system is narrowing its definition of what defines student success. It's almost all cognitive knowing, as evidenced by standardized testing. The pros and cons of that system have been widely debated, so I won't rehash them here. However, a side effect of this system is decreased flexibility in how we define success, and we are leaving many students with internal beliefs that they are failures.

A young person could be a prodigy in one or more areas (kinesthetic, inter-personal, musical, ecological), yet still grow up thinking that he or she is a failure based on messaging given by the schools. As some students' light dims and self-doubt grows, there's a good chance that they won't grow into their full brilliance and power. This is a tragic outcome that's a loss for all of us -- yet it's also an avoidable outcome.

How Mindfulness Can Help

Mindfulness is a way of paying attention to present-moment experience and doing so with kindness and curiosity. It is not cognitive but sensory, and so taps into and strengthens different but vitally important parts of the brain that have been neglected by traditional education. One crucial attribute of mindfulness is that it is practiced without judgment. Many of our students are so hard on themselves and their internal critic is so loud that just a few moments of being given permission to not judge can bring huge relief to body and mind. I have seen it bring students to tears. 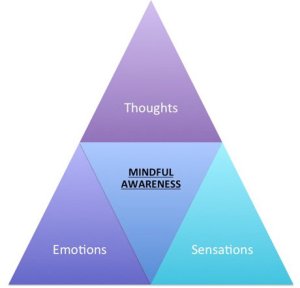 Just a few weeks ago, I was introducing the practice to some graduate students in a highly competitive health sciences program. Presumably they were all successes in the conventional system. I started by explaining the triangle of awareness to them -- how thoughts, emotions, and physical sensations all affect each other. I then led them through a guided contemplation to illustrate the point. They were invited to imagine a stressful situation and notice how they were feeling in their body, what emotions they were experiencing, and what thoughts they were having. By noticing the thoughts as the final step in the process, students can identify them as just thoughts they're having and not truths that must be believed, especially if these thoughts are causing unpleasant physical sensations and negative emotions.

We then did a five-minute mindful breathing exercise. The students closed their eyes and were invited to let the sensation of breathing command their full attention. When they noticed their attention wandering, they were allowed to notice where it went, but were encouraged to gently and kindly escort their awareness back to the breath.

During the discussion after the practice, one young woman was in tears. She had noticed her thoughts telling her that she was probably breathing wrong and wasn't good at it. This led to tightness in her chest, her heart racing, and a feeling of anxiety. In those few minutes, she recognized how her thoughts have been contributing to her anxiety all these years and also causing discomfort in her body. The ridiculousness of not being good at breathing revealed to her in stark clarity how insidious and unfair her inner critic was. She was excited to have made this connection and to have new tools for working with it.

I think this anecdote illustrates what is going on for many of our students. Sadly, many of them never make the connection between mind and body, and just keep sinking into those self-defeating thoughts as they worry about how they will measure up on the next standardized test. These thoughts are contributing to the rise in mental illness and inhibiting students from reaching their full human potential.

There is now ample evidence that mindfulness practice enhances positive emotions (PDF). Imagine the possibilities if we offered this to young people with developing brains! What if we helped all students make this simple connection and gave them the tools to strengthen their own inner knowing? What if we gave them permission to honor their true genius, even if we can't measure it on a standardized test? What if we practiced full disclosure and acknowledged that there are many different kinds of intelligence, and that some cannot be measured by conventional means? What if schools gave equal time and emphasis to cultivating things like kindness and compassion?