My former student, Brenda, graduated with a BA in psychology from Mills College, in Oakland, just a few days ago. Brenda was eight when I met her; she was a third grader in my class in an overcrowded, underfunded school in deep east Oakland. She was sweet and bright and we connected. 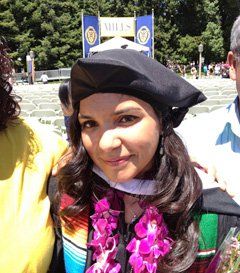 When she was in middle school, Brenda called. She feared that in her school (another overcrowded, underfunded school) she wouldn't get the kind of preparation she needed for high school. She feared for her safety (gang violence was a part of daily life), felt she wasn't learning anything, and knew she wanted to go to college. A couple months into the school year, she transferred to ASCEND, another Oakland public school, where I taught. She joined a class of 48 students whom I taught for three years, during their sixth, seventh, and eighth grade years. She joined us in our first year of opening this "new, small, autonomous school" where we were able to try innovative practices.

Brenda was a bright, dedicated, artistically-inclined student who worked exceptionally hard. While I am terribly proud of her, and I know how incredibly hard she's worked for years, I am not particularly surprised that she's graduated from college. And that makes me feel both very happy and very sad.

I became very attached to those 48 students, almost a little obsessed with them. For three years I gave them everything I had. Then I tracked them in high school, interviewing as many as I could at the end of each year, hoping to learn how I could do a better job as a middle school teacher. What had I done that was helping them in high school? What could we have done better? What did they need more preparation for? I attended the high school graduation of 75 percent of those students, which was deeply satisfying, but what I really longed for was to see them graduate from college.

This is the year when if they had all made it through high school and had been accepted to a four-year college, they'd be graduating. Of the 48, I know that seven are graduating this year. One graduated last year. A few more look like they'll do so next year. I've only lost track of a couple of kids from this group.

There's one thing that's really surprised me when I've read recent descriptions of what it means to be "college and career ready," how few indicators there are of the social and emotional skills that kids need. When I read through these lists, I believe that the majority of my former students were college and career ready; they had the requisite academic preparation. What many didn't have were the social and emotional skills necessary to negotiate high school or college.

Through a lens of social and emotional skill level, I can see that all of those who are graduating college this year were more equipped, even in middle school. As a third grader, Brenda was supremely emotionally intelligent; I remember that clearly.

As I think about my former students who are not graduating this spring, who never applied to college or quit in their first semester, I see a pattern: they didn't know how to manage their anger, frustration, fear, grief, loneliness, and other emotions. Many of them were brilliant, at or above grade level, came from two-parent households, had career aspirations, but they didn't have the social and emotional skills to get them through the many rough roads that our kids from Oakland travel.

I'd go back to that fall of 2001, when Brenda joined the 47 kids who were mine for three years, and I'd devote much more time to developing social and emotional skills. I don't know how, I don't know when (our time always felt packed as it was) but I think it's critical -- especially in middle school -- that we prioritize developing these skills. I have a feeling it would be more useful than the quadratic formula or distinguishing a metaphor from a simile.