Entering the digital world exposes us daily to new programs, software and systems. As both consumers and educators, we consistently sort through these technologies to find the ones that meet our immediate needs. With so many technologies available, there are times we overlook, misjudge or reject something that potentially has value for us.

Take, for instance, the 3D immersive environment known as Second Life, launched in 2003. By 2007 it was all a buzz. It seemed that everyone was taking notice of this malleable, dynamic and online space designed to be more than just a game. As the creators would market it, Second Life was in fact designed to be just that, a "Second Life." From fantasy to real world simulations, it appeared there was a collective interest in this 3D online immersive world that facilitated imagination, engagement and interactivity.

But then, just as it looked like a major shift in how we used the Internet, it fell silent. People started to abandon it. What was once a fun and vibrant digital land was now turning into a ghost town with coded tumbleweeds blowing through the virtual streets. 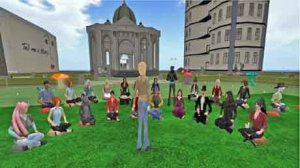 I have a theory as to why this happened, and this theory is two years in the making. Since November 2010, I have been involved in a professional development program called Project DIRECT, funded by the Department of Education. The mission of Project DIRECT (Distance Innovations for Rural Educators using Communication Technologies) is to support rural schoolteachers with the integration of technology into their content areas of reading, writing and studying, and to be in a safe community full of teacher collegiality. What is uniquely different about this professional development is that it is maintained almost exclusively online through Second Life.

Prior to this project, I only observed the culture of Second Life through an entertainment and media lens. What I observed was a lot of people going to Second Life with no real intention. Essentially, they were just "checking it out." After awhile they would report feeling lost, aimless and a bit bored. This is when I started thinking about the abandonment issues of Second Life, and it occurred to me that the success of the 3D immersive environment had little to do with the space itself. The success had everything to do with the intentions set forth in using the space.

My role in Project DIRECT has been somewhat of an archivist. From the launching in 2010 to its near completion today, I have been documenting the progression of the project through video, screen casting, machinima videos, blogging and survey. Through this process, it has become quite clear that giving Second Life a second chance for educational professional development was right on the mark, and this could very well be the next hottest 21st century learning trend. 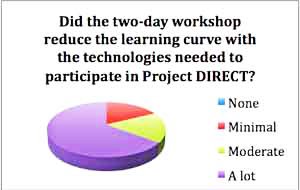 On November 5, 2010, twenty rural schoolteachers and half a dozen staff met in the small Southern Oregon town of Medford to launch Project DIRECT. Through a two-day intensive workshop, a series of crash courses were presented on the different technologies used for the professional development. These courses included Moodle, gaming, robotics, podcasting, iMovie, blogging and Second Life. The Second Life course was designed to help teachers adapt to and become comfortable with this 3D immersive environment. After several hours spent with all the technologies, nearly every teacher felt equipped to maintain and use them on their own. In fact, 65% of the participating teachers reported the two-day workshop greatly assisted in reducing the technology learning curve.

After the workshop, and for the rest of the academic school year, every Wednesday night at 7:00 p.m. teachers gathered at Alice Academy (on Second Life) for sharing best practices and learning from guest lectures. Project DIRECT staff, guest presenters and participating teachers presented and facilitated discussions on topics such as "Online Learning," "Active and Passive Voices for Writing" and "Digital Storytelling with Youth," along with a vast array of other professional development topics. Through an interactive experience with animated avatars, colorful scenery, helpful topics, collegiality, constant support and a safe space for community development, all of the participating teachers reported their enthusiasm for the project, and said that they would recommend this experience to a colleague.