Ready for the journey of a lifetime? It will require stamina and creativity, so pack only the essentials: comfortable shoes, paper and pencil, and -- more importantly -- curiosity, empathy, patience, humility and a sense of wonder.

You won’t need a passport, but you’ll be travelling across the planet.

You are invited to accompany the Out of Eden Walk, as two-time Pulitzer Prize winner and National Geographic Fellow Paul Salopek takes a seven-year, 21,000-mile trek across the planet. The journey is showcased as National Geographic magazine's cover story by Salopek and is the first cover story available free for nonsubscribers. His epic walk began in January 2013 in East Africa’s Rift Valley, the region that paleoanthropologists consider to be the human race's "Eden." He will head north into the Levant; across the steppes of Central Asia to China; by sea from Siberia to Alaska; and then down the length of the Americas to the continental "Land's End" of our species in Patagonia. The route looks like this: 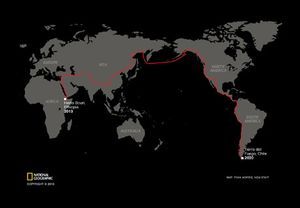 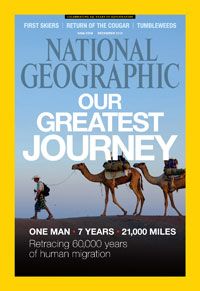 Salopek’s "investigation into human restlessness" stretches the boundaries of storytelling in the age of digital media. Along the way, he is engaging with the major stories of our time -- from climate change to technological innovation, from mass migration to cultural survival -- by walking alongside the people who inhabit these headlines every day.

The beauty of walking also lies in the discovery of the quieter, hidden stories of people who rarely make the news. As the Walk’s education partners -- the Pulitzer Center on Crisis Reporting and Harvard University's Project Zero -- realize, this expedition is brimming with great learning opportunities. And we all want diverse schools and students to experience these.

I serve as an Education Advisor to the Pulitzer Center, whose mission is to spread global awareness and engage the next generation on pressing international issues, utilizing its rich Global Gateway platform. (Out of Eden serves as one of the projects in the Global Gateway.) Our work with teachers and students has demonstrated that an inner-city classroom in Philadelphia can feel as connected to traversing the Arabian desert by camel as they do to the cross-town bus. According to a teacher in Chicago, from a district which seized on the Out of Eden Project as an opportunity to update its curriculum, this "empowers [students] to take charge of their own learning." 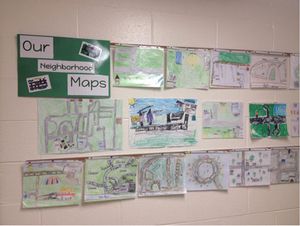 5 Ways to Integrate Out of Eden into Real, Experiential Learning

Readers familiar with Salopek’s reporting in The New York Times (and, increasingly, his Twitter followers) appreciate his poetic writing style and observation skills. But, as a learning opportunity, the story and the expedition go far beyond eloquent prose.

Here are five ways to learn alongside the Out of Eden Walk.

Implement hands-on learning curricula created by the Pulitzer Center, with activities like:

More lessons can be found under the Pulitzer Center's Education tab.

Join the Out of Eden Learn community via Project Zero. You can follow along with the blog and great hands-on activities put together by the Harvard team, and sign up to join a digital "walking team" composed of diverse schools around the world. 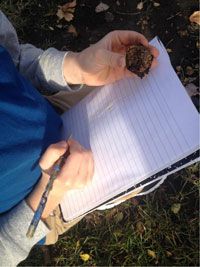 Go on your own walk through your neighborhood and record what you see. What do you notice and observe when you slow down that you might otherwise miss when you are rushing by? As we mention in this NPR interview, journal entries, essays, tie-ins to literature, and blog posts can all serve as platforms for recording observations. Walk to Learn offers a great example for Pre-K lessons. And at the other end of the age spectrum, diverse high schools located in far-flung parts of Philadelphia hope to have students embark on a walk originating in their own schools and converging at a midpoint in a historic neighborhood. Along the way, they will record sights and sounds to create a culminating project involving multi-media collaboration across the schools.

Start a dialogue with a faraway school -- maybe from a town or city along the walking path -- and share some of your questions and conversations with Paul Salopek via Twitter or his blog. Be on the lookout for upcoming Google+ Hangouts and other live events from the Out of Eden trail. Look for #OutofEden or #EdenWalk on all social media platforms to begin connecting.

Get ambitious with an interdisciplinary project: dedicate a month, a school term or each year until the Walk’s end in 2020 to a geographic and/or issue focus corresponding with Salopek's path and location. For example, your curriculum could integrate literature from those areas, current events, or major energy and environmental challenges that local populations are facing. Students could calculate distances and conduct deeper mapping and budgeting projects for the journey. Language, culture, cuisine, music, art and sports from those regions all have a place in this course of study. 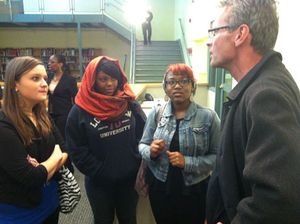 The great teacher Lao-Tzu said, "A journey of a thousand miles begins with a single step." Take his wisdom to heart and don't let such a vast journey overwhelm you. Start with a single step. Perhaps your step is watching an introductory video from Paul Salopek, or checking in on his regular dispatches or milestones from the field. The simple act of stepping out -- in whatever shoes you like -- can launch you on a great journey toward discovery and global citizenship. And you are not alone.

For further assistance or to share any ideas for integrating learning opportunities based on the Out of Eden Walk, send a tweet to @PulitzerGateway, or leave a comment below.