Holden Clemens (a pseudonym) is a teacher in Springfield, U.S.A. In today's post, he continues his series on practical tips for working with the gamut of exasperating educational archetypes.

I would like to tell you a story about the Invisible Administrator. I know what you are thinking, "Cool! Holden taught at a haunted high school!" Sadly, I taught at a regular high school, but the infrequency that I saw the principal in my school was plenty frightening.

I taught at a high school for a few years and we had a revolving door of principals and assistant principals. There were different reasons why they came and went, but one stayed around for while and that pleased the school board. Not having to search for a principal saved everyone time and money.

The Invisible Principle, I shall call Mr. Woodman, worked in the building for a little over ten years. Nobody is quite sure where Mr. Woodman was during the school day for the first 9 years of his tenure at James Buchanan High School. He would appear at staff meetings, but was never seen outside of the office during the day. Many wondered if he knew were the classrooms were. There were reports that Mr. Woodman could be caught in the early hours with a map of the school looking like a lost tourist in New York City. Basically, Mr. Woodman could never be found inside of the classroom.

The first instinct a person has is to say that principals are too busy to spend their time in the hallways or the classrooms. They have important administrating to do and they need to be in the office to do it. I think every teacher recognizes the fact that principals need to administrate. Teachers are not demanding that admins spend all of their time in the hallway or watching teachers in their room. At JB High, we just wanted to know that he was there. A physical presence goes a long way with teachers. Knowing the admin is down the hall or visiting classes is a great feeling of support. The big question is: Why don't administrators know this?

Well, like most schools, teachers spent most of their time complaining about the lack of support from Mr. Woodman in the halls and the classroom. Some of us speculated that he spent his time organizing his paper clip boxes, counting the tiles in his office or watching the tree grow outside of his office. We would get a chuckle and go back to our classes. Nothing was resolved, though. We would do the same things and make the same jokes every day. I'm not sure what we were trying to accomplish. The last time I checked, Mr, Woodman was not a mind-reader. How would he ever know that his staff was not happy with his invisibility skills? So, I had an idea.

I decided to invite Mr. Woodman to my class a week in advance to see what would happen. My students were going to be doing presentations on the Civil War and they tend to be pretty creative. I sent the email on a Monday inviting him to my class next Monday. I waited. I waited 2 days. Then I waited 3 days. On the 4th day I received a reply, "I'm sorry for the late response, but I wanted to make sure my schedule was clear for Monday. See you there." I was floored. I was also a little nervous. He had never been in my classroom and it was a bit of a mess. I needed to bust my butt and get cleaning!

Mr. Woodman came to the class and my kids did a great job with their presentations. Nothing makes a teacher feel better than showing off their students to other educators. After class, Mr. Woodman and I had a moment to talk about the lesson and he said something very interesting. He said, "I want to thank you for inviting me your class, I don't get many invites." I must have had a shocked look on my face because he continued, "I don't like just popping into classes. Surprising a teacher is never fun. All of that pressure to perform while I'm there can cause more harm than good. I like to wait for an invite." I let him know that he is always welcome in my classroom. No advance notice needed.

The Invisible Principal wasn't hiding after all. He was giving his teachers the space he thought they wanted. Like most things, it all comes down to communication. As teachers, we wanted to him to just know he was invited in our classrooms and as a principal he wanted to be invited directly. Students are not mind-readers and neither are admins. Sometimes, as teachers, we just need to tell our admins what we want to see from them. It can be done in a tactful way, but it needs to be done.

Admins need to try and make themselves approachable to their staff. That may entail setting aside time every week to stop by classrooms or walk the halls. Being seen is important to teachers. We want to approach you and talk to you. You used to be one of us. We all have the same goals. If we can talk to you about our classes and see you around, we can build a strong community of us (Staff) instead of us (Teachers) AND them (Admins).

Since we Mr. Woodman has left, I have had other translucent administrators, but I always make the effort to reach out and invite them into my classroom. Now, some are still counting the ceiling tiles in their office, but at least we both know that the lines of communication are open. 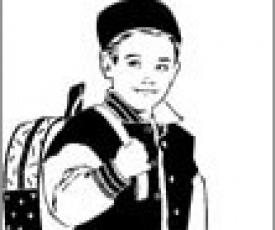