If you've ever tried to pry a child away from some video game that seems to exert more influence over him than you could ever hope to, you might have asked yourself: Why can't we get a force this captivating in schools?

After two days at the Games for Change festival at New York University last week, I'm encouraged to say the answer is: we're working on it. This was a conference of, by and for game designers and researchers, so it was heavy on complex charts about research methods and far removed from how you might engage students in your classroom Monday morning. But the fruits of this conversation could be incredibly pertinent on a Monday morning just a few years from now. 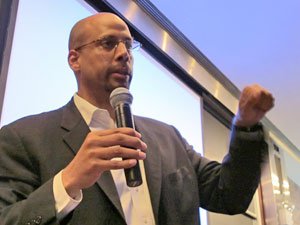 These game designers and researchers, a couple hundred strong, are passionate about tapping the power of games to deliver learning -- and perhaps even to transform schools. And the U.S. Department of Education, in the person of Assistant Deputy Secretary for Innovation and Improvement James Shelton, wants to use its power (and purse) to nourish a flowering of just this sort of innovation. We need it.

"We may have the perfect storm to help us break loose from the status quo," Shelton told the conference-goers. He was speaking about an education upheaval much bigger than games -- a new focus on building creativity and critical thinking, not just drilling basic content knowledge -- but games could be one potent part of it.

Whipping up this storm, he said, is a "consensus in Congress that something big needs to happen," along with economic strains that will force us to consider "radical solutions," and "the reality that people are becoming more aware that we're fooling ourselves. We've lulled ourselves, because of the status of our county and our achievements, into a false sense of security. That security has been disrupted, and people are more open to the notion that we need to do something very different." (Wait a sec -- I think that was just a high-ranking federal official saying that America isn't doing everything right, and we need to take a hard, humble look in the mirror and change our ways.)

The Power of Games

No doubt assessment will be key to this mission. And games could transform assessment. Scratch that: games could be assessment. One powerful form of it, at least. Instead of slaying pixel-painted dragons, for instance, I discovered that you could navigate a mid-air obstacle course using the laws of physics in a quest of save the world (that's a game in the works at Vanderbilt University) or try out different ways to save the real-life lake that is dying in your real-life town (a game being developed in Madison, Wisconsin, starring local Lake Mendota). 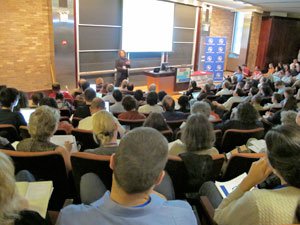 OK, these scenarios might sound less sexy than dragon-slaying, but the designers believe they can solve that. There's evidence that strong narratives will motivate kids to solve hard puzzles, said Jan Plass, co-director of the Games for Learning Institute. In one study, he said, a child pursued one problem for 45 minutes -- and this was a problem that the girl wasn't particularly interested in to begin with. Is that music to anyone's ears?

Games could also be a powerful means of differentiating instruction (by, say, adapting the quest to the learner's abilities) and personalizing -- putting the learner directly into the content they're studying. Richard Wainess of UCLA explained that something as simple as using the words "I" and "you" in a lesson -- saying "You look up and see clouds" vs. "There are clouds in the sky" -- yields significantly better learning outcomes. Learning through games is, almost by definition, learning by doing.

There's even some evidence that games, if designed right, can encourage kids to use more positive social behavior (cool!).

Designers at the conference envision taking this quest far beyond schools as we know them. Kurt Squire of the University of Wisconsin-Madison said: "Plugging this back into schools to get a few points higher on a standardized test misses the point. The whole point is that there's an opportunity for something much more revolutionary, letting kids build games, run their own guilds, direct their own learning."

Now for a dose of reality: we've got a ways to go, and the education sector isn't known for the speed of its innovation. Try out this stat from Shelton: 3 to 4 percent of spending in a mature industry typically goes to research and development. In education, it's 0.1 percent.

Shelton wants to change that by building a reform-minded R & D agenda and jumpstarting it with public investment (and, he hopes, private capital as well). At Games for Change, that vision was not a hard sell.

One important thing missing from the conversation in New York, though, was the strong voice of everyday educators (not to mention students). As we launch this surge of innovation, we need to explore not only what groundbreaking new things the designers can dream up, but also what real folks in schools want and need.

So let's start here. If you could pick anything, what kinds of new materials (video games or otherwise) would you want in your classroom? How would they engage kids -- individually, competitively or collaboratively? What kinds of lessons would they teach -- basic content, critical thinking skills or good social behavior? All of the above?

Think big. These could be tools that suit the kinds of schools we have now -- or they could radically transform those schools.

I'm eager to hear how you all want these seeds of progress to grow. Tell me, and I'll pass it on to the folks with the fertilizer.

-- Grace Rubenstein is a senior producer at Edutopia