Our modern understanding of social norming occurred in 1936, when Muzafer Sherif studied the autokinetic effect, a phenomenon that occurs when people observe a stable light inside a dark space. After time passes, everyone "sees" the light move. Sherif, on a hunch, asked confederates to enter the room and offer a contradictory perception. The participants, without realizing they had been tricked, revised their original judgment to align with the confederates' stated perception. Later, even when participants re-entered the room alone, they continued to believe that the confederates' perceptions were correct.

The mechanism for norming is group talk. The result is conformity...either the good kind where hippies rally under Steve Jobs and invent a Macintosh computer or the version that begins with goose-stepping and ends in death camps. Such potency, researchers Patricia and Richard Schmuck assert, makes norming one of the most important influences on academic achievement.

What are Classroom Norms?

In contrast to rules, which are (usually) teacher generated and work best when introduced on the first day, norms are "an agreement among members of a classroom or school about how they will treat one another," according to Gary Borich, Professor of Educational Psychology at The University of Texas at Austin. There are three types of norms: those that pertain to safety and health (no shoving), moral norms (help peers), and discretionary norms (clean your desk before leaving for the day).

Norming and Stages of Group Development

Bruce Tuckman's research on teams revealed that group development happens in five stages, regardless of the culture, language, or purpose of the group: forming, storming, norming, performing, adjourning. Teachers need to allow the first two stages to occur (2-3 weeks) before facilitating the classroom norming process. Here are brief descriptions of those stages:

To help students advance successfully through the first stage, establish clear goals. During storming, stay positive during tense moments and be ready to promptly address conflicts. Describe the team development process and reassure students that things will become easier when the later stages are reached. Also rehearse routines until they're automatic.

How to Facilitate Classroom Norming

When introducing a class to the norming process, state that the goal is to develop a class culture that promotes academic achievement. To address potential impatience, I explain that our class is like a supertanker. "It won’t turn quickly based on one person's needs, but we will arrive at the intended academic destination." In addition, mention that the class will revisit norms later in the semester and make course corrections.

Next, ask students to complete a problem/norm T-chart in small groups. Before learners begin this task, talk them through the first entry (see italics, below) to model the process. 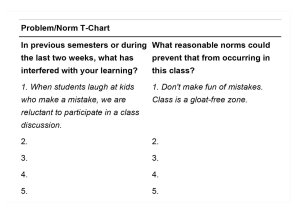 After 10-15 minutes, disseminate a list of potential problem areas and ask if they have already been addressed in each group's T-chart. If not, direct students to keep developing more norms that will handle these issues.

What (if any) norms are needed to address these areas?

After students finish developing norms in teams, write down everyone's contributions on the board. I always add my favorite norm to the list: enter class with the academic swagger of Matthew McConaughey, ready to take care of business. If there are disagreements, ask, "Does the norm promote academic achievement?" Finally, have students vote on which ones to adopt and post the agreed upon norms in the classroom.

Exercise #1: What You Should Know about Us?

Before norming day, have students take the Kiersey Temperment Sorter, a personality assessment, and ask them to form groups with peers who have similar scores. Ask the groups to a) identify what their teammates have in common and b) decide what outside groups should know about them. You’ll need to ask the extroverts to talk quietly and the introverts to simply talk. Then ask the groups to report on their discussions.

Exercise #2: What Have You Heard?

Purpose: To reign in the random diffusion of perceptions and crystalize more productive norms.

During the first class, direct students to list what others have said about your teaching or class. Collect and sort the comments into categories. Then address the most common perceptions. Which ones are correct? Which beliefs should be dispelled?

Does the norming process take time? Yes, but when students share important values, beliefs, and goals, they accomplish more. Don’t trust me. Trust the science.

What are your favorite classroom norms or norming protocols?