My school day started at 4pm. 4pm rocked my eight-year-old world. 4pm = Transformers, G.I. Joe, Voltron, Thundercats -- the best time of the day. At 4pm, unknowingly, the story elements of fiction wore a deep groove into my brain; I learned about character development, setting, story arc, problem/solution, and action. 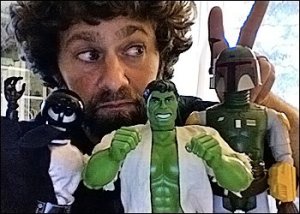 And I totally plagiarized those elements by playing with action figures, hitting the backyard to create live-action scenes, and drawing. I was writing, just not in the traditional form. And when I picked up a book (not often, I am embarrassed to say) I wanted it to mimic the very things that I loved: fiction, sci-fi, and fantasy.

This is what I knew as an eight-year-old coming to the page. And millions of kids today bring the same energy and knowledge to their writing palette. So, why isn't fiction taught in elementary school? The answer to that question has twisted and contorted my brain to utter perplexity for years. For me, it makes sense to teach it, but maybe we can pick at the knot together.

What Do Kids Really Know?

I learned to write at 4pm, way after writing class. In school, writing was a mental tug-of-war for me. I've heard the statement, "Write what you know," probably like a million times, but only a handful of times did that make any sense to me.

Teacher says, "Write what you know."

Teacher corrects, "No, write what you know and it needs to be real."

Student thinks 4pm is what I know. It IS real to me.

The realm of reality offers many topics on which to write; I'm not knocking the personal narrative (not much). But it's not the only harvestable crop. Stephen King urges us to broaden the statement of "write-what-you-know." In his book On Writing: A Memoir of the Craft he writes, "If you are a plumber, you know plumbing. But that is far from the extent of your knowledge; your heart knows things and so does your imagination."

When I say to students, "Write what you know," there are no strings attached. Stories are everywhere in the kid-mosphere. Kids love movies, video games, cartoons, and toys. The energy is incredible. Why not transform that energy into writing? Teach your students what I never was taught: to write down your imagination. It's all there. It just needs to go from brain to paper with guidance.

All children are basically born into a world of fiction. What was the first book you read to your son or daughter? Was it talking frogs or fairies? I remember stocking my son's bookshelf with all kinds of books before he was even born: Frog and Toad, Cloudy with a Chance of Meatballs, Little Bear, and Where the Wild Things Are. Ted DeMille, in his book Making Believe on Paper, calls fiction the mother genre: "For most of us, our entry level into literacy was through fiction: storytelling, fairy tales, folk tales, ghost stories, and myths." DeMille reminds us that the best-selling children's books of all times are dominated by fiction books; and of the last fifty Newberry Award winners, all but a handful have been fiction.

If you believe students need to read as a strategy to better their writing, giving them the freedom to write within the genre they are reading is the best and most obvious choice. Isn't it?

Throw that Kid Some Fiction! He Needs Help!

By writing and reading fiction, children safely dance with the bigger issues in life such as love, loyalty, courage, and evil. Nancy Martin, the late British researcher of student writing and learning, states, "Story writing is essential because it's the one mode that synthesizes children's experiences, their preoccupations, and their emotions." Students need a way to anonymously deal with life's problems or even change them.

Escapism lets the writer hash out the complexities of reality by controlling a homemade fantastical world. Unfortunately, escapism is often used in terms of negativity and weakness. I am in agreement with J.R.R. Tolkien when he states escape as being a very practical rule, maybe even heroic. Would you blame a woman trying to escape an abusive marriage or a military commander retreating in order to think, regroup, and make another go at it? Junior authors are mingling with an outlet that will spark problem-solving and reflection, two major aspects of maturity and growth.

The world is too small for the heart and mind of a nine-year-old. A child's imagination is expansive. Instead of blocking it, it is our job to help harness it, mold it, and turn it into a powerful medium for insight and thought about the trials and tribulations of life. We should use writing as a means to reinstate the adolescence that our culture is so insistent upon stealing.

Fantastical expression is "The Ring," "The Chosen One," "The Book," or any other metaphorical statement representing the beating heart -- the life force -- the triumph of the imagination. We have the ability and the opportunity to feed it, make it stronger, and even inspire children to set their own path for greatness. In the book, The Wizard Behind Harry Potter, Marc Shapiro states that teachers admired Joanne Rowling's talent at an early age. She took these compliments as a sign that she had found something she was good at. And isn't that what we all want?

What are some other ways to create a safe space for kids to use their imaginations to explore the world?