"I wasn't actually in love, but I felt a sort of tender curiosity."
-- F. Scott Fitzgerald, The Great Gatsby

The new film adaptation of The Great Gatsby starring Leonardo DiCaprio might move teens to fall in love with the story of the book, but it won't make them better readers of the novel. Long before the film was announced, I've been using simple technology tools to help my eleventh graders become curious critics analyzing the text patterns Fitzgerald employs.

Playing with the Text

We begin our text exploration with Wordle. The purpose of my Wordle demonstration is to show students how to "analyze the impact of specific word choices on meaning and tone" (Common Core State Standards Initiative 2011).

As a word tool, Wordle gives "greater prominence to words that appear more frequently in the source text" (Feinberg). That means students do not have to hunt for and count the number of times Gatsby uses Daisy’s name in the first chapter; if he uses it a lot, Wordle will show that word in a larger font than other words. Not only does Wordle, or even its cousin Tagxedo, serve that specific, practical purpose, but such tools also appeal to our sense of play and need for personalization with font, color and shape options. 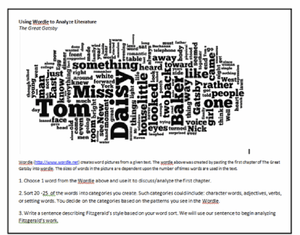 I explain how Wordle works and then give students time to puzzle over its patterns. Walk with me around the classroom and eavesdrop on the groups as they discuss what they notice:

"Daisy must be the most important; look at how big her name is," notes Luis, sitting with three other students at the blue table. "I think we should have names as one of our categories for the words."

"OK, look at all of the direction words: away, toward, front, East, West and side," adds Natalia.

"There are several action words, too." Hunter's finger moves across the Wordle as he speaks. "Wanted, took, left, sort, come, see, remember, asked, rose -- I wonder if that's rose as in stood up or rose the flower, I don’t remember -- should we create a category for these too?"

The insight that Fitzgerald used direction and contrast to map out character relationships was our first foray into literary analysis, using a technology tool to take away the tedium.

Curiosity kindled, it's time to go deeper into the text. To do that, I demonstrate the power of the "find" feature and connect it to a Google search box. Often, students come to class unaware of the power of hitting the "Control" and "F" buttons on the keyboard simultaneously. They do not realize that the "Search" box in Google Books can be harnessed for academics. Once I demonstrate that power, they're off in pursuit of literary patterns. Let me share a recent story from my classroom about the rewards of using Google Books to analyze text.

Instead of using a concordance or asking students to skim and scan pages and pages of a text, counting up instances of a word or image, I send students to Google Books. With a simple word search, the search and find feature calls up every page number on which the word appears: voila -- a digital concordance. Not all books are entirely housed in Google Books, but texts represented by snippets or short previews can also be searched. Even when page numbers of varying editions do not match up, students still land in the general vicinity and can hone in on evidence.

Fitzgerald's use of color in The Great Gatsby intrigues students. Color is a concrete idea and conceptually within reach of the budding textual critic. The word green, for instance, is used 13 times by Fitzgerald in The Great Gatsby; white appears 29 times. Could that mean that Gatsby's green-light dreams are more elusive that the erasing power of Daisy's naiveté? I'm just playing here as I think aloud and model the process for students. The concordance power of Google Books lends itself to interpretive play. It's programming magic that turns the tedium of tracing Fitzgerald's use of color into a guessing game of "I wonder."

The Color of Curiosity

Students sit in table groups in my eleventh grade Advanced Placement language and composition class. Each table shares one computer. At the front table, I listen as Rashad directs Danielle's search on Google Books.

"I wonder how many times he [Fitzgerald] uses the color red. Two people die and you'd think red would be an important color for Wilson's anger or Gatsby's frustration. Let's see. Type in red," commands Rashad. "Only nine times, what does it say? Read it, Danielle."

The four members of the group lean together toward the computer as Danielle scans the search results and talks through them. "Well," she says, "the first one refers to the new books Gatsby bought, 'red and gold like new money from the mint' [Fitzgerald 2004]. Then on page 14, 'a new red gas pump' must be Mr. Wilson's gas station. Pages 20 and 25 are both descriptions of red-haired women at one of Gatsby's parties. Oh, page 108 mentions 'tracing a red circle in the water' -- that reminds me of Gatsby's death in the pool; could it foreshadow it?"

"Click on that one so that we can reread the scene," says Rashad.

And they're off, students searching the novel for red (it appears nine times), reading bits on the computer and revisiting scenes from the print books they have in their hands. When we use Google Books to trace patterns in text, students begin to wonder, to hypothesize, or as Brian Cambourne says, to "approximate" what real critics do (Allen and Gonzalez 1998, 132). I can hear it in their voices and see it as they creep closer to the monitors to get a better look at the latest search results.

You, too, can take the tedium out of textual analysis. Teach students how to leverage Google Books and the search function. Practice with an excerpt from The Great Gatsby to rekindle students' fire for the story now that there's a movie version. Guide discovery to empower the readers in your room.