As we move deeper in to the realm of mobile learning and digital devices, I find that sometimes we forget how starting with analog isn't all bad. In fact, admitting that not everything has to be done entirely digitally can actually be quite a relief. As I mentioned in an earlier post, my role is to develop and transmit professional development within district and nationally. Often, I take that role home with me to my two "mobile natives" (children that have grown up on nothing other than mobile devices).

When my second grade student was in kindergarten, he brought home the most delightful hand-drawn "About Me" book and spent the next five minutes proudly explaining the contents. His descriptions were so amusing and charming that I felt compelled to capture them. We used the SonicPics app to capture each page and then had him narrate over the pages to create a video. I still chuckle as he describes fish sticks as "dead fish." What I love about the idea of marrying the analog and digital is the ability to archive students' work. I still have this delightful keepsake, but I would never been able to capture the thinking behind it had I not used an iPad. (See full project instructions here.)

Flash forward to first grade. My son brought home a book report project where he was assigned to draw and summarize the beginning, middle, and end of a book. Although he struggled with the handwriting, when I asked him about each selection, he was able to articulate far more than he was able to write -- and so the interactive Amelia Bedelia book report was born. We took pictures of each of his hand-drawn images, created a collage in Canva, and then used the Tellagami app to have him verbally retell each section. To blend all of these elements, I chose Thinglink. (See full project instructions here.)

Creating a Legacy of Authorship

Over the summer, my son decided to start writing and illustrating his own stories. As he read the story out loud, I noticed inflections and nuances in his voice  that wouldn't have been detected in the text itself. So we snapped pics of each page and then decided to use Book Creator to include audio and video narrations. Publishing also became a concern for him as he wanted friends and family members to see his work. And let’s face it -- sharing a packet of paper is not as easy as authoring a book online. Even today, he still mentions that he is a real author and has written a book. The fact that we took the analog one step farther allowed him to experience and relish true authorship. (See full project instructions here.)

This year my son, now in second grade, brought home his first biography. The assignment included a handout of questions as well as a bottle biography craft (essentially modifying a two liter bottle to look like Benjamin Franklin, our selection). While I don't mind crafts, I felt like dressing up the bottle alone did not impact or elevate his understanding of Ben. So (with a few nudges from me), he opted to digitize his Benjamin Franklin bottle and add a few more elements. We used Popplet to create a mind map of adjectives describing Ben (starring a hand-drawn image of the great man at the hub), wrote a postcard to Ben thanking him for all of his accomplishments using the Bill Atkinson PhotoCard app, and assembled the whole piece using Toontastic. (See full project instructions here.) 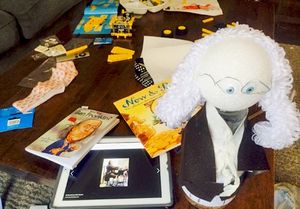 When I tweeted out his project, I soon learned that this is a common second grade assignment. I instantly had multiple teachers all over the country asking if they could share the project with their students and classes. And once again, my son had the opportunity to feel like his work mattered and had merit, because we had digitized the analog and shared it online.

Questions to Ask Yourself

So I hope the lesson here is that analog is not bad. In fact, hand-drawn and student-created projects are worthwhile. What is important to ask yourself about these analog projects is:

If in fact you find that you have answered yes to any of these questions, then I hope that you consider blending and marrying the digital within these projects and assignments -- and begin supporting your students in creating their own learning legacy.