Some years ago I taught a life skills class to a group of eighth grade boys. The curriculum I offered wasn't working. They were disengaged -- they wouldn't read, write, or talk about what I wanted them to talk about -- and they were mounting a rebellion.

"What is going on with you?" I confronted them; I was losing my patience. 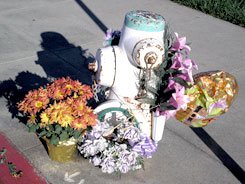 Their retort: "You know nothing about our lives. You don't know what it's like to live in the neighborhoods we live in." They were so angry, these boys, and they felt I was to blame for some piece of it.

I wrote a grant for digital cameras. I sensed that these boys, at this age, would be more inclined to communicate through images than through writing. "A picture is worth a thousand words," I offered, handing each kid a digital camera. "What do you want to tell me about your lives?"

For several months, three days a week, an hour each time, we wandered through the streets around our school in Oakland, California. "What do you want me and all the others who don't live in your neighborhood to know about your world?" I asked.

The boys captured hundreds of images of graffiti and garbage, hypodermic needles and empty bottles of booze strewn around the rundown city playground, gang insignias painted across the slides. They photographed the school crossing sign riddled with bullet holes, tire marks in the middle of the street from the midnight sideshows that kept them from sleeping well, broken glass, barbed wire, and iron bars over windows. 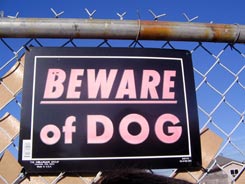 They photographed the seemingly endless array of signs on fences and gates that warned of dogs as well as the growling pit bulls and chained up Dobermans. On the commercial strip, they photographed the bars and pool halls, the prostitutes (out at 9:15 a.m.) and the liquor stores on every corner. They captured the memorials erected at the site of a death, and on one very sad morning, they photographed a massive bloodstain on the sidewalk where a Guatemalan day laborer had been stabbed to death the night before.

I only demanded (after one incident) that they not photograph anything that could put us in danger: drug deals going down, for example. Their bravado at 13 years old was something to contend with, but I got tough, issued stern warnings and they listened.

On the days when we didn't go out to do "fieldwork," I used their photos to entice my students into writing; they had thus far vehemently resisted the activity. It turned out they had a lot more to say and could do so, could tell the stories behind the images and their feelings behind the stories, when prompted with their own photos.

As we looked at the images, my students requested instruction in photography techniques. I delivered some lessons on lighting, composition, and strategies for photographing human subjects, and into these, I integrated academic vocabulary: angle, depiction, perspective, exposure, contrast, and so on. I was being sneaky. Their reflections -- written after each foray into the neighborhood -- grew increasingly richer in language, for example, "I crouched on the ground to get a wide-angle shot of the church because I wanted to depict the contrast between the religious place and the bullet holes in the sign on the street."

I was meeting the academic, social, and emotional objectives I had intended for this project. And I had indeed laid out objectives; there was a method to the madness, regardless of the appearance of fifteen unruly preadolescent boys and one short teacher roaming the neighborhood with cameras. 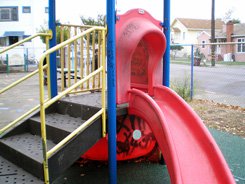 About two-thirds of the way through our semester, something shifted. It was Marcos who pointed it out as we viewed the photos they'd taken one week. "We're starting to look at different things," he said. "At first, we took photos of all that messed up stuff in our neighborhoods, but now we're looking at other stuff."

That day's slide show included an image of an elderly man sweeping the sidewalk in front of his house, a woman walking a fluffy white miniature poodle, a nopal cactus growing through a fence, and two friends reclined on their front stoop playing cards.

"This is my favorite," said Reynaldo, indicating a photo of a rose in front of a trash can. "It's like there's trash in the background but in the foreground there's a beautiful rose. That's what I focused on when I took this one, not the trash."

Anthony offered his insight: "We had to get that other stuff out. We had to see it and show you before we could see the nicer stuff. Man, our world is so complicated," he said, to the murmured agreement of his classmates. "And it's not all bad." More agreement from the boys.

At the end of the semester, we compiled a book with their images and written reflections and poetry inspired by the photographs. Each student selected a number of photos to enlarge and display for visitors at our biannual "Exposition of Student Learning." Their world was seen and heard by hundreds of community members and teachers.

"I think I'd like to be a photographer," said Javier. "I felt so powerful with that camera."

"You should," said his classmate, Martin, "Your photos made me have feelings. They made me feel angry and calm and peaceful and hopeful."

"Yeah," said Javier, "that piece of metal felt good in my hands." The boys laughed. "That's the kind of power I want."

to learn about other art projects "by the young for the world."-->