The courtroom is breathless as the state’s attorney rises to present her opening statement in the case of Chris Archer v. New Columbia. Jury members sit at attention, listening to the argument that the defendant, Chris Archer, should be tried for first-degree murder and criminal hazing in the death of fraternity pledge Milan Jackson.

This courtroom is actually a classroom, and I’ve shed my educator identity to preside as Judge Safir over an impressive mock trial staged by students in the Race, Policy, and Law (RPL) Academy at Oakland Technical High School.

As a young teacher, I led a law academy program for urban students and incorporated mock trials into my U.S. history and pre-law courses. I learned firsthand the impact this strategy can have on the literacy skills of all students, but particularly those those who haven’t had much access to rigorous academic experiences. Mock trials are a gap-closing strategy. By engaging students in rigorous and authentic literacy tasks, trials demand high levels of critical thinking, critical reading, and writing for an audience.

And just as important, they’re fun. Experiment with this strategy and you’ll find your students riveted by the landscape of the law.

Mock trials do take some preparation. The RPL teacher, Mr. Madom, and I met frequently for a couple of months to imagine and design this trial. Once the unit began, I visited Mr. Madom’s classes several times to coach and prepare the trial teams. It’s important to scaffold the process with a combination of graphic organizers and modeling of key literacy skills (e.g., how to assess evidence, craft an opening statement, and examine a witness). Finally, Mr. Madom and I blocked out two extended periods for students to rehearse before the actual trial.

To make sure all students are involved, consider running two trials simultaneously, which allows everyone to have a speaking role and students to serve as jurors in the other trial.

To create a real-world vibe, transform your classroom into a courtroom. Mr. Madom set up a mock bench and name placard for the judge, a witness stand, an official table for the prosecution and defense teams, and a jury gallery. Other small touches that you can include are a gavel for the judge and a podium for attorneys to use as needed.

Embedded vocabulary: The trial format will allow you to teach academic language in a real-world context and have students immediately apply new words. Mr. Madom and I designed a weekly vocabulary tool for students to learn key terms, and I was struck by how many terms showed up in the opening and closing statements and cross-examination.

Code-switching: For students learning to code-switch between informal social discourse and academic discourse, the mock trial setting provides gravitas and a reason to practice the latter. Here’s an example from one student’s closing statement: “In this case, the prosecution has proven that Chris Archer had a motive to murder Milan Jackson, premeditated her death, and executed his plan.” This student had struggled to organize her ideas, but after one-on-one coaching, she delivered a powerful closing. To help students internalize the use of academic language and prepare their arguments, invite parents and community members into the classroom as coaches.

Oral argumentation: A lot of thinking goes into creating a compelling argument that is supported by evidence. Students spent weeks scouring case law and witness statements to come up with a storyline and an arc of reasoning. One student told me, “I’ve gone deeper thinking about this case than any other assignment I’ve ever done: reading between the lines of each witness statement, crafting the story together, and thinking about what the other side will say so we could deter them.” 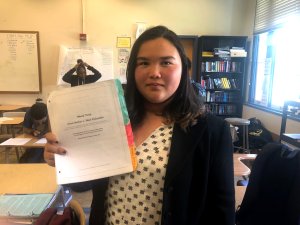 Close reading of text: Students had thick packets of material to review and analyze. Early in the unit, Mr. Madom guided students to tab each section of the packet with different colored Post-it notes, creating a framework for them to understand the structure of a case. Next they meticulously analyzed each witness statement, looking for evidence to support their case and loopholes that the other side might use.

Crafting great questions: I was blown away by the rigor of the questions that our young attorneys wrote. Riley interrogated his witness by asking, “How would you describe the personality and psychological profile of Milan Jackson? How might Milan’s drinking problem have contributed to her death?” There were so many examples of excellent questions.

This experience reminded me about the power of embedded literacy instruction that depends on context and background knowledge rather than discrete tasks. Through the mock trial, students mastered new vocabulary, learned to build an argument, and mobilized evidence to support their case. Sophomore Angeline said, “I was more engaged in this mock trial than any other assignment I’ve ever done. We were guided by everything we learned throughout the entire year and could apply it here. And now I’m ready to write my essay!”