Within the ML-PBL [Multiple Literacies in Project-Based Learning] program, Mr. Starr implemented three distinct third-grade science units in his classroom. Through the Squirrels, Toys, and Birds units, Mr. Starr had the opportunity to cover the overall concepts of survival mechanisms and physical structures of squirrels, magnetic forces and the motion of objects, and similarities and differences in different bird species. While teaching these units, he aimed to elevate students’ self-discovery process by making them the active agents of their own knowledge construction process—instead of acting as the authority in his students’ learning experience. For example, rather than directly explaining the survival mechanisms and adaptation of different species, Mr. Starr posed a number of Driving Questions about the body structures of squirrels (their teeth, claws, and so on) that help them survive in their habitat.

These Driving Questions are one of the distinctive principles of project-based learning (PBL) that help students find the meaning and relevance of a phenomenon and spark their wonder and curiosity toward science. By using Driving Questions, Mr. Starr put students in an environment in which they could raise and answer questions, make observations, and form claims about scientific phenomena themselves. What is unique about ML-PBL is that, regardless of the specific unit, students all have firsthand experiences where they can make clear connections with the Driving Questions and figure out phenomena in a collaborative and dynamic fashion.

Mr. Starr’s Initial Use of the Driving Question

At the beginning of the school year, Mr. Starr started teaching the Squirrels Unit. As an ML-PBL teacher in his first year, he struggled to organize the lesson around the intended Driving Question. However, after practicing using Driving Questions, he improved his teaching in a visible way. For instance, in one of his previous lessons in the Squirrels Unit, Mr. Starr had started the class with the aim of teaching about squirrels’ survival in their own habitat. During the class, he did not explicitly use the unit’s overall Driving Question: Why do I see so many squirrels but can’t find any stegosauruses? Instead, he used open-ended, guiding questions like “We talked about how the structures of the squirrel help [her] to survive in an environment with other organisms. What can you tell me about squirrels’ structures?” Even though Mr. Starr did not use and revisit the lesson’s specific Driving Question, he facilitated discussion by making connections and forming a bridge between the students’ prior and current scientific ideas. 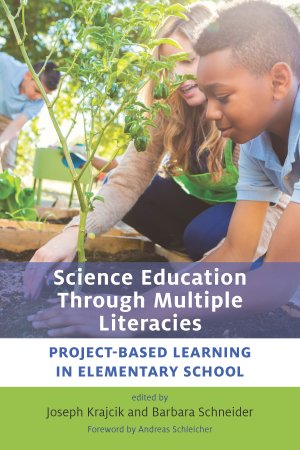 “Okay, so what are fossils, and how do they help us understand prehistoric organisms and environments? Lots of big words in that question. We talked about prehistoric. What did we say: ‘Pre-’ means ‘before,’ right? So, it is before history—we have to look at structures in order to find out how things happen. So, we looked at some different periods and time. We said we had two different periods: the Ordovician and Silurian periods. That happened 495 million years ago.”

Here, Mr. Starr is explicitly raising the Driving Question, What are fossils and how do they help us understand prehistoric organisms and environments?, and supporting students’ literacy and language skills by first unpacking the term “prehistoric organisms.”

Discourse Moves to Support the Driving Question and Students’ Sensemaking

Mr. Starr also benefits from discourse moves to support and cultivate students’ engagement with the Driving Question and to provide an interactive and collaborative learning environment. Discourse moves represent a variety of facilitative strategies, such as helping students to clarify their thinking and deepen their reasoning, making students’ ideas public, emphasizing particular scientific ideas, supporting students to listen to others’ ideas, and applying their own thinking to others’ ideas. These moves allow Mr. Starr to enrich opportunities for students to reason and express their thinking.

In addition, as a response to Mr. Starr’s discourse moves, students take initiative and participate by using their own moves, like telling and restating ideas, clarifying their thinking, and building on their peers’ ideas and comparing and questioning them. Mr. Starr’s discourse moves act as an initiator for students to express their own ideas to find their own voices. They not only represent Mr. Starr’s teaching and facilitating trajectory, but also show how students take ownership of their ideas, figure out the world around them, and exercise their sense of agency as active learners.

The following example from the Squirrels Unit illustrates Mr. Starr’s use of discourse moves and students’ participation. Mr. Starr is ready to move the class’s previous discussion about earlier forms of organisms a step further. He plans to facilitate a conversation about prior organisms, fossils, and animals’ changing environments. He guides students to make claims about how animals might have interacted according to their relative sizes. Before elaborating further on different animals’ sizes and features, the class talks about earlier forms of plants. Mr. Starr smoothly makes a connection between the previous and current lesson by using some reminders:

JONAH: You should have evidence.

MR. STARR: Can you tell me more?

JONAH: So, there should be like stones of them, of like the plants, so you know them.

MR. STARR: So, my question was, “How we can talk about plants from a long time ago?” and Jonah said, “By using evidence.” I asked him to tell me more and he said, “If they were around, there should be stones of the plants.” Who can add more to that or add some details to that? Betty?

In this conversation, Mr. Starr first reminds the students about the Driving Question from the previous class and gives students a chance to refresh their minds regarding the plants from the past. Here, Jonah underlines the importance of using evidence. Mr. Starr’s continuous reminders about using evidence help the students understand how scientific phenomena are formed.

After hearing Jonah’s response, Mr. Starr asks him to tell more, to clarify his idea. Mr. Starr’s clarifying question assists Jonah to dive more deeply into his thoughts. Jonah’s follow-up answer about the stones of plants refers to a later form of the plant in its life cycle. For example, thinking about the life cycle of a leaf, it may fall onto the ground, then decay and mix with other earth materials.

Or it may fall into a river, where it sinks into the sand, and a leaf-shaped imprint is formed. In time, the sand slowly hardens into a rock, like sandstone. Millions of years later, someone may pick up the stone and observe the shape of the leaf, which is now a plant fossil. Therefore, Jonah’s answer has importance, since it shows his awareness about the previous form of plants, and he can assert this information as a piece of evidence to support his claim.

Following Jonah’s answer about stones, Mr. Starr decides to summarize the full conversation from beginning to the end. He revoices the Driving Question to remind students about the core point of the discussion. He restates Jonah’s ideas and acknowledges his contribution. In this way, he gives Jonah ownership of his idea and makes his thinking public again. As a final move, he asks if someone can add more to Jonah’s ideas. This particular move helps students apply their thinking to others’ ideas. It also keeps students alert, because they need to pay attention to their peers’ ideas in order to build on them.