Like many educators, we hold ourselves to high expectations for engaging our students in projects that are culturally relevant, build community, and apply their learning in a real-world context. Last year, we had students work on a single project that aspired to all three of these goals.

Over the course of eight weeks, our students used hydroponics to grow herbs that were used to make dumplings. Why dumplings? When defined broadly as “dough that encases a filling” or “dough that sits on top of a filling,” this food is found and loved in cultures around the world. As such, our project celebrated the diversity of our students and opened the door for cross-cultural exchange.

Our school is located in Winooski, Vermont, a city with only 8,000 residents, but it’s the most densely populated and most culturally diverse city in northern New England. The district hosts students from 25 nationalities representing 19 languages, which include, but are not limited to, English, Nepali, Swahili, Vietnamese, Karen, Somali, Mai Mai, and Arabic. Most of these cultures and languages were represented among our 40 sixth graders last year.

The project was supported by a grant from the Gund Institute for Environment at the University of Vermont and involved close collaboration with three faculty members: Dr. Eric Roy, Dr. Leon Walls, and Tricia Brown.

We started by asking students to notice and wonder about a “heat map” of projected global food production in 2050. Students’ noticings helped to frame the hydroponics project as a local solution that was part of a global puzzle. But why grow food? What could we use it for? How about dumplings?! Hence began our challenge for students to grow herbs for the Great International Dumpling Challenge, a friendly competition in which students used rates and ratios to develop the tastiest dumplings with cilantro, basil, and parsley.

From students’ naming and then caring for their plants to choosing their own dumpling recipe, student ownership was a through line of the project. 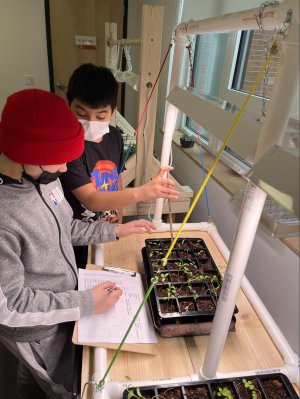 Students measured the heights of their plants each week, and they stopped in during lunch and passing periods to show friends their herbs. The plants were a highlight of family conferences, and several students gave their seedlings to friends who weren’t in our science class.

Student ownership was also a feature of the cooking process in math. Students chose a dumpling recipe, and many selected one from their family’s culture: samosas, momos, potstickers, perogies, and empanadas. One student called her Bosnian grandmother for a family recipe. 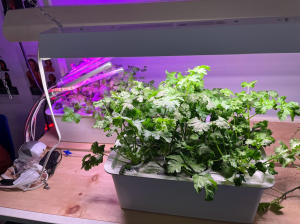 Students designed experiments that investigated how manipulating light impacted the growth of parsley, basil, and cilantro.

An incidental benefit was changing the ambience of the learning environment from the purple lights, gigantic herbs, and sinuous root systems. Students got their hands dirty when planting seeds, measuring plant growth, and carefully cutting the plants.

Our rooms were filled with the smells of herbs as they grew and when students chopped them to prepare for cooking. And of course, we enjoyed the delicious aromas and flavors of dumplings.

A Celebration of Diversity and Community

Author and journalist Michael Pollan once said, “Food is not just fuel. Food is about community, food is about identity. And we nourish all those things when we eat well.” Pollan’s words beautifully capture our experiences in this project. Family members came in to help cook. Our students learned about and enjoyed foods from each other’s cultures, which enabled the deepening and extension of connections among students and adults. 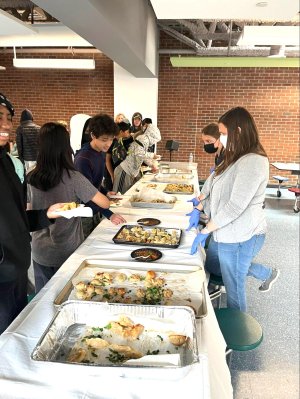 Even if schools don’t have a great deal of cultural diversity, foods (especially dumplings!) can be an entry point for learning about different cultures and building community.

Further enhancing the connections among our community members, our school district’s cultural liaisons were judges and taste testers at a culminating event where we also sampled all of the dumplings.

The winning group made vegetarian Nepali momos and received a cabbage as the winning trophy. When a chant of “Eat it! Eat it!” ensued, a beloved student took a bite out of the raw vegetable on behalf of the winning team, causing the whole crowd to erupt into fits of laughter.

All of our dumplings were vegetarian, but we made sure the “meat” of standards-aligned math and science content and skills were centered in the project, which meshes with author and national education consultant Zaretta Hammond’s conceptualization of culturally responsive teaching. Specifically, we sought to (in Hammond’s words) “improv[e] the learning capacity of diverse students who have been marginalized educationally.”

Students measured the heights of their plants each week. In math, they calculated the mean, median, and mode of these measurements and then “handed them back” to science class, where patterns were analyzed and growth of herbs under different conditions was compared.

With each week, students improved their analytical skills and developed greater independence as scientists, mathematicians, and chefs. Dumpling recipes were reviewed for ratios to produce the best flavors. Costs for ingredients were calculated using unit rates, and each dumpling had a unit price.

To finish the project, our students completed a reflection similar to KQED’s Engineering for Good curriculum. Zulie wrote that the project was “soooooo cool. It inspired me to be an environmentalist.”

Whatever students’ feelings about the Great International Dumpling Challenge, we doubt they will forget the towering fragrant herbs, the delicious multicultural food, and the sense of community and connection. We look forward to improving the project this year and extending the integration of disciplinary perspectives to English and social studies.