In my 10th-grade Latin class we had been reading Pliny the Younger’s description of the eruption of Mount Vesuvius in 79 CE, which buried and consequently preserved the Italian towns of Pompeii and Herculaneum.

I gave my students two recent articles to read about this research, and then I gave them an essay question: “Write about what interested you in one of the articles you read.”

The Power of Wondering

As I had hoped, I noticed the phrase “I wonder” in several of the responses. I believe that people learn deeply when they wonder, and I try to get my students to enter the state of wondering as often as I can.

One student wrote, “Something I wondered about the food and hot drinks that the article describes is: Does anyone still cook these dishes? Or this style of food? Has it been passed down? Or just buried?” She concluded, “Hopefully one day I’ll be able to try some ancient Roman recipes.”

How could I resist? My school has a seldom-used teaching kitchen and a very helpful and interested executive chef, who collaborated with me to plan a cooking class in the space.

The teaching kitchen is just an extra space in the production kitchen where students can work without crossing paths too often with the chefs. It’s not big enough for a whole class, but small groups can rotate through while others do prep in the cafeteria. I was able to carve out a two-hour block of time for the experience.

The project required some research. The Classical Cookbook, by Andrew Dalby and Sally Grainger, has three chapters with recipes from Roman Italy circa 79 CE. I divided the class into five teams of three students each. I gave each team a copy of the book along with my reading list and notes and asked them to choose a recipe, create an ingredient list, appoint a head chef, plan a trip to the grocery store, and think about how to organize the work. They posted their lists of ingredients on a discussion board and were able to coordinate their shopping.

The cook day was Monday, which gave the students a chance to go to the grocery store with parents or guardians and get the ingredients they needed. On Friday, the school’s executive chef popped into class and talked about how it would work. We would depend on her help for things like the ovens, which had complicated digital interfaces.

Good learning experiences strike a balance between structure and surprise. Parts of the project were structured, like building the five teams and making grocery lists, yet there was also a significant element of surprise: What would actually happen in the kitchen? How would the food taste? And there was a sense of danger: sharp knives, crowded spaces, fire, and 15 teenagers—what could possibly go wrong?

The teaching kitchen comprised some counter space with two sinks. Our food was refrigerated in the same walk-in refrigerator that serves the cafeteria; we cooked on the same stove top, grill, and ovens as the food service cooks. The cooks went above and beyond, helping students and programming the industrial ovens, all while making lunch for the rest of the school.

Success was not a foregone conclusion. Safety was paramount. I supervised activities that involved cutting or using the burners in compliance with the rules of the teaching kitchen. Students asked for help from me and from the executive chef, but for the most part they had to rely on each other to figure things out.

The dishes that struck me as the most interesting were the sausage and the cheesecake. The preparation of the sausage required the team to soak the casing—pig intestine—in water while slowly filling it with water and untangling it. While one person held open the end of the casing, another squeezed in the ground meat and herb filling with a piping tube. 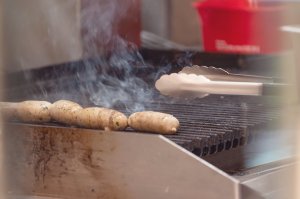 The dish required a small amount of Vietnamese fish sauce—an exact facsimile of Roman fish sauce made by combining anchovies and salt and letting the fish ferment, dissolving itself in its own digestive juices. The fermentation produces glutamates, or amino acids, that yield the distinctive umami taste. The sauce is notoriously pungent and salty. The making and the tasting of the sausage had some familiar aspects but with elements that were strange and indeed repugnant.

The cheesecake was in essence a standard baking project. But it was surprising in its own way. Ancient cheesecake features a breadlike bun with a slightly browned crust and a soft, slightly cheesy middle. We poured a little honey on our plates and dipped hunks of the cheese bread into it. Everyone agreed that it was good, but “cheese”  and “cake” seemed like the wrong descriptors. Was it bread? Was it cake? Was it cheese? Our modern tongues could not translate it.

Studying ancient cultures creates in the minds of students an uncanny tension between familiarity and strangeness. We at once think we recognize ourselves in our ancestors and discover a detail that snaps us back to the present. When can we trust that our perceptions of the past are not filtered by our expectations? When we detect something familiar, how do we know that we have not simply discovered ourselves in our inquiries?

These are questions that scholars of ancient cultures ask regularly. The Roman cooking project thrust my students into the problem in a unique way that demanded more of them than just their reading skills. They wondered about the enigma of the past through their senses: taste, touch, and smell.