My school, Bagnall Elementary School in Groveland, Massachusetts, has moved away from principal-driven (top-down) initiatives, and has worked to strengthen teacher collaboration, through which teachers have both increased autonomy and responsibility for achieving intended outcomes. Like many schools that have made this shift, we have experienced growing pains and unexpected bumps in the road.

Collaboration is hard work, and there is often not a clearly defined path for how we can best communicate with one another. Even if you start a meeting with an idea about how it should go, a colleague can derail that idea. There are unexpected challenges when people come together, a situation not unique to schools.

As principal, I am a member of the school’s instructional leadership team, which includes teachers, parents, and community members. In past meetings, I often hesitated to bring ideas forward because the risk seemed too great, and other times I made claims without giving enough thought to presenting evidence to support my viewpoint. We would often go off on tangents and lose sight of our shared goals and focus. There was a resistance to taking what people were saying at face value, and there was skepticism embedded in every conversation. These were all roadblocks in achieving the team’s mission and goals.

The Purpose of Establishing Norms

After a few difficult conversations, our instructional leadership team decided to establish norms. These norms became our guiding principles for collaborative work. I thought that if they were general enough, they could potentially impact all interactions involving the school community, including with parents and community partners. Prior to establishing school-wide norms, the leadership team would sometimes become a place to air complaints, and there was an emotionality attached to the conversations that made team members uncomfortable. It became difficult to solve the problems that were brought to light because we were in a reactive mindset, as opposed to being proactive.

We realized collectively that our difficulty communicating and solving problems together might be the result of the absence of shared expectations of ourselves and one another. We knew that if we were having trouble within our team, it was likely that individual grade-level teams were having similar struggles.

We turned to the approach laid out in Meeting Wise: Making the Most of Collaborative Time for Educators to guide us. The authors describe the importance of instituting norms for how all group members should behave in meetings. Our goal was to establish norms which would extend beyond our meetings and be used throughout the school.

At the initial meeting, we discussed our hopes and goals for working together. Team members described the need to be treated with kindness and to feel safe in bringing up new ideas. They also said that they wanted to be given the benefit of the doubt when they made mistakes, and for the administration to assume positive intentions. As the team brainstormed potential norms, people commented about how shared expectations of one another was a missing piece in building a positive school culture. We had the structural elements for collaboration in place, but we did not have the foundation for sustained collaboration until norms were established.

We also discussed how best to deal with the inevitable: when norms are violated. This is important to discuss early on in the process, because even in schools with a healthy professional culture, there will be instances in which people stray from the norms. The team members vowed to use the norms in these challenging situations by assuming positive intentions on the part of the person who violated the norm(s), to ground statements in evidence when discussing it with the person, and to focus on solutions. We found a solution to this tricky situation within the norms themselves. Following this meeting, the visual depiction of the norms (see graphic) was shared with teachers and staff throughout the school. 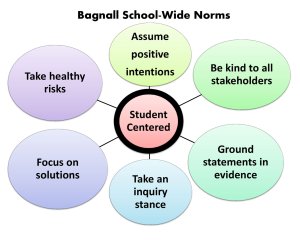 The norms we established as a leadership team have slowly permeated throughout the school community. They have served as guiding principles to shape the mindset of the entire staff. As principal, I have noticed more staff members bringing issues and concerns to me. The norms have helped create a safe space for school staff to take healthy risks and describe difficulties they are having freely. They have helped staff use probing questions (take an inquiry stance) with one another to develop a deeper understanding of problems when they occur, rather than jump to a conclusion or solution without understanding the problem fully. This has helped us all respond to evidence rather than have a knee-jerk reaction when difficult topics come up.

In addition to the improvements we have seen within the school community, we are also seeing signs that the norms are spreading into relationships with parents. This has been most pronounced with the norm of assuming positive intentions. Teachers have been able to more effectively partner and align with parents in their goals because they now assume that parents have positive intentions, even when they are upset and communicating in a challenging manner.

The norms we have established at Bagnall Elementary serve as the foundation of our collaborative work together, and provide a framework to have open, honest, and ongoing communication.