Liz Burrows’s official job title is tobacco control coordinator at the health department in Oldham County, Kentucky, but these days she doesn’t spend much time worrying about tobacco: It’s all about vaping.

“A high school girl told me recently that it’s ‘really easy’ to vape in class, and that it doesn’t belong to any one clique—kids in every group are doing it,” said Burrows of the schools she visits in the Louisville suburbs to give talks. “We worked so hard to reduce the smoking rate, and now it’s going back up.”

Marketed as an alternative to help adults quit smoking tobacco, vaping—or inhaling vapor from an electronic cigarette—has skyrocketed among teens and tweens across the nation.

From 2013 to 2014 alone, e-cigarette use among high school and middle school students tripled, according to the Centers for Disease Control and Prevention (CDC), which reports that 50 percent more kids vape than smoke traditional tobacco cigarettes. A 2017 National Institutes of Health study found that more than one in four high school seniors reported vaping in the previous year, while 16.6 percent said they had vaped in the previous month. More than 6 percent of eighth graders also reported vaping in the previous month.

Lured by glamorized images of vaping on social media with hashtags like #VapeLife and #DoIt4Juul—Instagram contains 13.4 million #VapeLife posts—many kids seem unaware of the risks involved. A recent survey by the Truth Initiative found that 63 percent of 15- to 24-year-old previous 30-day users surveyed didn’t know that vapor pods, which come in hundreds of kid-friendly flavors like gummy worms, cotton candy, and unicorn puke, contain highly addictive nicotine—a single pod containing 200 puffs can have just as much as a pack of Marlboros or Camels.

As vaping devices are increasingly showing up in school parking lots, bathrooms, and even classrooms, teachers and administrators are scrambling to address the problem. But it isn’t easy. Unlike their traditional counterparts, e-cigarettes are easy to buy online and conceal, and they don’t carry a strong smell. The popular brand Juul, which represents the majority of e-cigarette sales, looks like a USB drive and is small enough to hide in a shirtsleeve.

In response, here are some of the promising ways that schools and districts are trying to curb what Jonathan Winickoff, doctor and chair of the American Academy of Pediatrics Tobacco Consortium, has called a “public health disaster.”

Since e-cigarettes are still relatively new—and one of the great lessons of the anti-tobacco campaigns was that punitive approaches don’t work well—school administrators and health department officials say that giving teens and parents health information about vaping is critical to prevention. According to the National Institutes of Health, when high school seniors were asked what they thought they had consumed the last time they vaped, more half said “just flavoring.”

“The perception adults and media give that e-cigarettes are harmless is a big part of our problem,” said Valerie Phillips, a physical education teacher in Round Rock, Texas, with 19 years of experience. “Kids don’t understand what’s in it; they think it’s just flavored water vapor.” 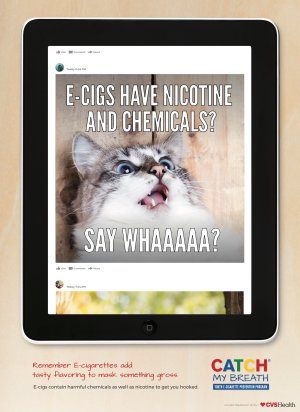 To counter the misconceptions, the nonprofit CATCH My Breath provides schools with a free curriculum for middle and high schoolers that teaches students what chemicals are in vaping pods and how they can be harmful to their health. Early studies indicate that some of the chemicals in vaping pods could be carcinogenic and cause a scarring of the lungs called popcorn lung. Students are also made aware of clever vaping marketing techniques and armed with strategies for avoiding the social media hype.

With talk of vaping on the rise in her district, Phillips incorporated the four CATCH My Breath vaping lessons directly into PE activities at her middle school. In one, sixth graders learned about the health impact of vaping chemicals like acetaldehyde, propylene glycol, vegetable glycerin, and nicotine, and then participated in a relay where they had to “name that chemical” while racing the clock. CATCH My Breath lessons are available online.

In hopes of curbing the widespread use of e-cigarettes in Orange County, California, educators are using a social and emotional learning (SEL) approach.

Run through the Tobacco Use Prevention Education (TUPE) program, California’s anti-smoking education program, the lessons help students continue to develop SEL skills like self-regulation, problem solving, and communication that they can apply in situations where they might be inclined or feel pressure to vape.

These SEL lessons are part of TUPE’s four-part approach, which also includes information on vaping, a cessation hotline number, and student-led anti-smoking projects in their schools or communities.

©Wikimedia Commons CC BY-SA 4.0/MylesClark96
The widely-popular Juul vaping device is the size of USB drive and fits easily into the palm of your hand. 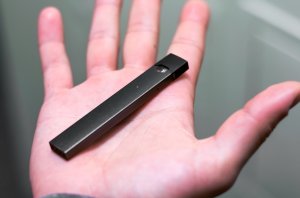 ©Wikimedia Commons CC BY-SA 4.0/MylesClark96
The widely-popular Juul vaping device is the size of USB drive and fits easily into the palm of your hand.

“They’re learning how to deal with social pressure, how to respond to family dynamics and stress,” said Ryan Crowdis, the TUPE program manager for Orange County, which is currently running the program in eight area districts. “Any young person can learn from that kind of information.”

And when a student is caught vaping at school, a TUPE-trained school staff member talks the student through their decision-making process, examining what led them to vape to help put them on track to make better choices in the future.

Other districts are turning to their students for help.

After trying costly vaping detectors in bathrooms and strict consequences like suspensions with little success, Gregg Wieczorek, principal of Arrowhead High School in Milwaukee, decided to take a different tack. This fall he’s sending students to the seven feeder middle schools in greater Milwaukee to talk to the younger students about the dangers of vaping before they start.

“I’m hoping that when the middle schoolers see this kid they looked up to on the basketball team saying, ‘Vaping is bad for you and here’s why you shouldn’t do this,’ it might have more impact on them than the teachers or parents saying it,” Wieczorek said.

Other communities are having students craft anti-vaping campaigns aimed at their peers. In Charles County, Maryland, students in the after-school program called the Young Researchers Community Project researched the health effects of vaping and then created a series of public service announcements that were used in televised morning announcements at area middle and high schools.

Evolving technology and new products like the smaller, less conspicuous Suorin Drop may make the vaping problem even more difficult to manage in the future. Public health officials in some states are advocating for stronger FDA regulation of vaping devices, such as raising the buying age to 21 or cracking down on online sales. Juul has promised to spend $30 million on youth prevention, including a school curriculum, but most tobacco and vaping preventionists are skeptical.

At a number of schools, staff are seeing a need to break down barriers between school and home life and partner with parents instead.

First thing in the morning, I had to Juul; that’s all I could think about.

At one school, a parent training that only had nine parents last year packed the room with more than 50 this year. TUPE’s Crowdis said that parents need to be warned that the nicotine addiction from vaping is a serious addiction. A student who spoke to parents at a session told them, “First thing in the morning, I had to Juul; that’s all I could think about.”

“There’s this whole culture. Kids are getting addicted to it, and it’s scary for young people,” Crowdis said. “They don’t realize it starts a long road to addiction.”