Pickleball is the fastest-growing sport in the country, for good reason: It’s a fast-paced, fun, inclusive game that anyone can play. I was lucky enough to first fall in love with pickleball in the 1990s during PE in middle school. I remember the pickleball unit being different than sports because it was full of laughter, fun, and good energy, and everyone loved it.

As an educator, I’ve found myself in a position where I can spread my love of this game to a new generation of players. Along with the obvious health benefits to the game, players gain social, emotional, and critical thinking skills. These make the game a good choice for schools to add to their curriculum.

All our students have the opportunity to play pickleball in PE. Getting pickleball set up isn’t much different from any other sport, and most schools could easily integrate this into their PE curriculum. Paddle sets start at around $10, and pickleball nets start at around $40, both lower start-up points than other racquet sports. There are also grants that will help schools start pickleball programs in their buildings, such as the ones offered through USA Pickleball. 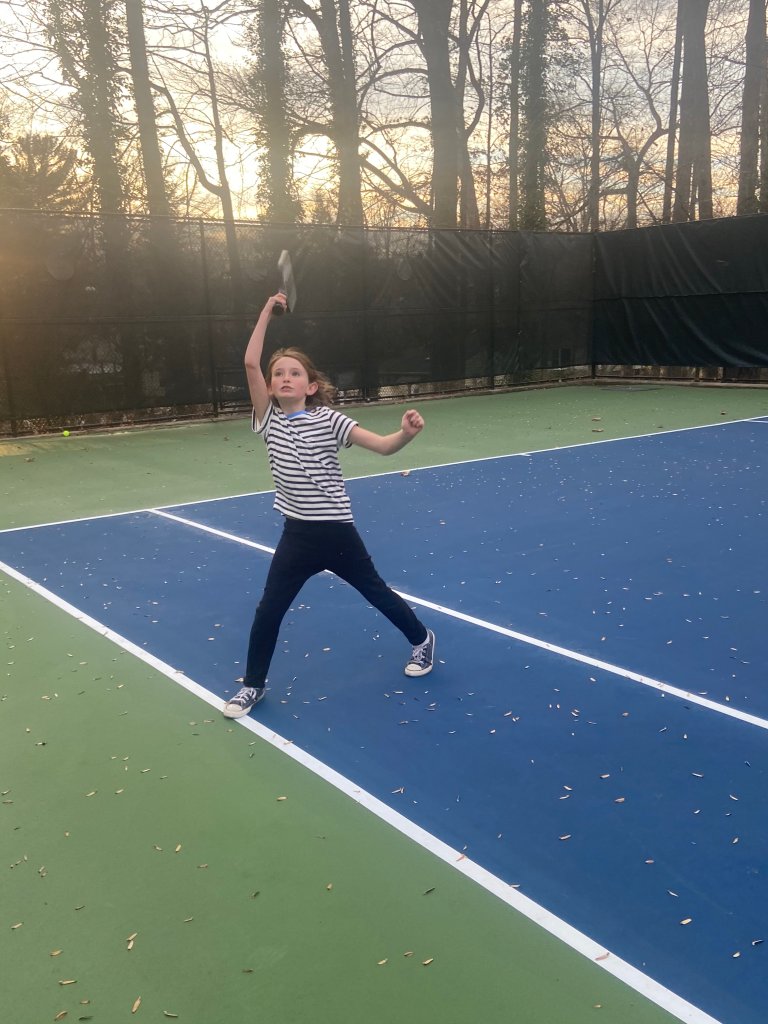 Pickleball is great for children because it is played on a small court with a lightweight, easy-to-maneuver paddle. Kids can cover the court easily, and the equipment isn’t overly burdensome for little hands. Elementary-aged children have all the skills needed to start learning.

A pickleball court is 44 by 20 feet, and four pickleball courts can be created on a single tennis court. In a standard gym, up to eight pickleball courts can be created using floor tape and creative spacing. Pickleball is often played on a tennis court, but the rules are more similar to those for Ping-Pong. Each game starts with the serving team hitting a pickleball (which looks similar to a whiffle ball but has more holes and bounces better) with a paddle across the court to the opposing team. Both the receiving and returning teams must let the ball bounce once before hitting it back over the net. After that, you can hit the ball on a bounce or in the air. The game is won once a team gets 11 points. Most games last about 15–20 minutes.

Inclusivity: One of the main reasons schools should consider teaching this sport is because pickleball by nature is an inclusive sport. It requires no special skills or talents: Everyone from new athletes to the next LeBron James can play and feel included. Kids who might not excel at more traditional sports can feel empowered and successful on the pickleball court, which in turn can increase the likelihood that they will willingly engage in other activities.

Additionally, older children and younger children can play together and not risk getting hurt. It can often be dangerous for older kids to mix in with younger kids because size and strength matter a great deal in many sports, but with pickleball that’s not the case. Staff members can also play with students—the kids may be surprised that they are able to compete with and even win against their bigger, stronger, faster teachers.

Strategy and skill building: Pickleball, a cross between ping-pong, tennis, and chess, is a game that relies on strategic thinking, where brains usually win over brawn. Kids who might not be the most athletic but have good critical thinking and decision-making skills may find that they are able to beat their more athletic opponents by outthinking them. A strategic, well-placed shot on the pickleball court will win you more points than shots relying solely on brute force. PE games should allow kids who are still developing coordination and athletic skills to participate and have fun. Kids who don’t typically enjoy traditional sports might excel in pickleball.

Pickleball also gives kids a fun way to develop better hand-eye coordination, an important skill for many tasks in school like reading and decoding. The ball in pickleball moves slowly enough to allow children who are developing hand-eye coordination to successfully play while giving them practice improving their skills.

Finally, pickleball brings people together. Even the most competitive games are filled with moments of laughter, discussion, and camaraderie. Every pickleball match ends with all players coming together to tap paddles and thank each other for the opportunity to play. The psychological effects of being active, having fun, and appreciating each other might be just the thing many schools need.

Pickleball may be the antidote to ward off the lingering negative effects of the challenging past few years. Schools should join the game that’s sweeping the nation. As they say in pickleball, “Let’s go! Zero-zero-two. Game on!”