“I suck. No one really knows me. I’m basically an outcast,” Angel, one of my seventh graders, declared as she walked into my classroom during recess.

I was surprised because Angel was outgoing and seemed socially well balanced. We discussed her feelings, and I realized that while she felt her peers didn’t know her, it was also true that she didn’t really know them. She perceived that they didn’t like her, but she couldn’t give one example to explain why she felt that way.

I used to spend little time on social and emotional learning (SEL) in my sixth- through eighth-grade classes because at my school SEL is only taught during advisory. I decided to change that, and in an effort to have all of my students relate to one another in an intentional way, I decided to create a communication board modeled on Twitter. Once I had created it, I realized it could also be used for formative assessment.

Creating a Twitter board is simple. Make a template with space for a profile picture, the student’s real name, a Twitter-style handle, a short bio, and a list of followers. That takes about a quarter of a page, leaving room for tweets. Have students fill out profiles—some of mine drew a profile picture, but most used a photo—and slip the profiles into clear sheet protectors. When we do this exercise, I display the profiles on a whiteboard for a few days, using magnets to hold them in place. When we’re done, I store the profiles in a folder—they don’t take up much space and are ready for next time.

Cut some paper into small slips that students can use for tweets, which they can tape onto the appropriate profile.

Courtesy of Jill Fletcher
A mock-up of a profile from the writer’s classroom Twitter board, with profile details on the left and tweets on the right. 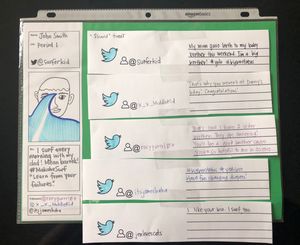 Courtesy of Jill Fletcher
A mock-up of a profile from the writer’s classroom Twitter board, with profile details on the left and tweets on the right.

To ensure that each student has an audience, they all have to enlist at least three followers—a friend, an acquaintance, and someone with whom they rarely interact. Followers promise to respond to initial tweets. I also encourage students to respond to peers they aren’t following.

To generate tweets and responses, I developed a multistage activity:

Step 5, making connections, consists of having students add heart stickers or hand-drawn hearts to tweets they personally connect with. I find that middle school students still enjoy stickers. A nice touch is to have students write their initials inside the heart to build relational capacity.

If you have multiple periods, allowing students to heart tweets from other classes is a good way to build positive social engagement between peers.

It took me about 45 minutes to introduce this idea, and the students spent about 30 minutes tweeting to each other the first time—they got a bit faster after that. When the exercise is over, students can keep the tweets they received.

Using the Board for SEL and Community Building

When we do this activity as a way to build community, I suggest to students that they tweet about topics such as current mood, life updates, funny observations, or random (yet appropriate) thoughts.

It may be difficult for you as the teacher to refrain from comments about the length and randomness of the tweets. For example, initial tweets like “School sucks” or “I like sleep” may trigger you to suggest more positivity or more elaborate reasoning, and response tweets like “#goals” or “same” may cause you to question the quality of the interaction.

It’s important to not say anything about these tweets. If you let students have a writing space that is theirs, they’ll have an opportunity to authentically connect with one another. This is important if you also want to use the Twitter board for formative assessment.

Once they’re done tweeting, I look over the board and read out some highlights. This is the final step in publishing student work—their ideas, humor, and feelings are acknowledged by the entire group. This is a meaningful statement to students, telling them it’s OK to feel the way they do.

Using the Board for Formative Assessment

Using the Twitter board for formative assessment follows the steps described above, but the prompts are different. For example:

Be sure to encourage students to tweet any questions they have when they try to address your prompts. Tweeted questions are beneficial for several reasons. When students see their peers’ questions, they realize they’re not alone in their questioning. So questions are an essential element in students making connections with peers. Posting written questions can also reduce the embarrassment some students may feel about asking a question in front of the class—they use their Twitter handles when they tweet, so they may feel a little distance from their tweets.

And when you see that several students have the same questions or misconceptions, you can adjust your instruction. Starting off the next day by acknowledging the most common questions or misconceptions that students tweet is a powerful strategy to show them that you hear them. If a student has correctly answered a peer’s question, you can give a shout-out about this as well.

All of these acknowledgements signal to students that they are co-creators in class instruction—their voice truly matters.