I developed a unit I call the Roman Aqueduct Project to bring my Latin students out of our classroom into the makerspace, where they experience ancient Roman technology, engineering, and culture in a different way. The project is an opportunity for them to put their hands on the kinds of objects that helped create an empire.

We read a short passage in Latin by Frontinus, the administrator of the Roman water supply in the 1st century, to get a contemporary perspective on the aqueducts of Rome. But my goal is to depart from intense language study and give students a new perspective on Roman civilization.

The Importance of Aqueducts

Roman aqueducts were beautifully designed and executed, and they served imperialist purposes. Water from wells was perfectly sufficient for Roman towns and cities in most parts of Italy and the northern Mediterranean, so in one sense there was no real need for aqueducts. That need arose from the desire to have constant running water for public baths and fountains.

The baths played an important role in the development of Roman society—they were places where people networked, building relationships through which power accrued. Public fountains provided clean, fresh, running water in towns throughout the empire. Since they could not be turned off, the excess ran down the streets, cleaning away sewage, which improved public health. City dwellers could rely on safe, uninterrupted, and abundant municipal water. Only the aqueducts could provide enough water to keep the baths and fountains functioning—well water would not suffice.

The grand arcades of the aqueducts that crossed valleys and plains served another important purpose, announcing the unstoppable advance of the Roman Empire. 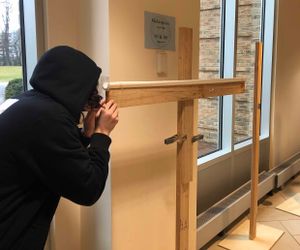 Latin II usually occurs in ninth grade after two years of middle school Latin grammar and language development. Students are typically just finishing up grammar, still wedded to massive charts of participles, pronouns, conjugations, and declensions. They are beginning to see the whole structure of the language emerge, and my subtitle for Latin II is “Language Structure and Discovery.” Structure is salient, discovery is daily, language is everywhere in the room.

The Roman Aqueduct Project keeps the structure and discovery, but it leaves behind the language, providing a short break from the intense light that Latin teachers like me typically shine on the language. It’s an opportunity for students to use other strengths and tools to learn about Roman culture: a radial arm saw, perhaps, instead of a verb chart.

Roman technology was simple by our standards, so an aqueduct is relatively easy to model. In five to 10 class periods, a group of 14-year-olds can get a grip on the basic physics involved, understand how to use the tools and materials provided by a makerspace, place the project in its historical and cultural context, and produce a working model of an aqueduct. We’re not building a Tesla, more like a four-cylinder 1955 Chevy—just the basics. 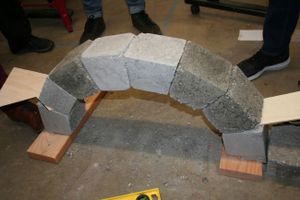 Unlike most learning projects—typically done in small groups—the Roman Aqueduct Project is a single, collaborative project to which all the students contribute. Separate tasks can be assigned to teams: One team builds molds and mixes concrete to form a Roman arch. Another sets up and aligns the piers along which the channel will run. Another builds and operates the chorobates, a working model of an ancient Roman surveying tool that allows the group to mark a level path from the beginning of the run to the end. And one works on the plastic tubing that represents the output system of the aqueduct: sealed pipes and a water tower that allow distribution of the water to different parts of the city. The students choose which teams they will work on, and tasks often overlap.

I don’t grade this project. Some students come to it with knowledge of materials and expertise in design, but many do not. They often fail in their initial attempts, but they’re not often frustrated or stressed. Those who have used the makerspace in middle school are comfortable with failing and have developed resilience and perseverance.

The project provides time and space to dream, design, and explore. My students learn how to handle a screw gun, a glue gun, and a box cutter. They learn how to measure without a measuring device and to design an arch with a string, a pencil, and a nail. They learn how to use water and gravity to create a horizontal line. They learn soft skills too: how to work within teams and how to bring those teams together to complete a project. They learn how to lead and how to follow. And they have time to consider our driving question: how the technologies of the Romans, like their language and literature, are both familiar to us and at the same time alien. You can find more project specs and photos here.

When completed, our aqueduct runs for 30 feet across the atrium of the science building at a height of about five feet. Observers are captivated every time I pour a few cups of water into the head end and we watch it slide down the imperceptible gradient. We all know how it ends: Water flows downhill. But to know that simple principle with all of its implications in the same way that a Roman knew it is to transform one's perspective.