Mathematicians and scientists are socially awkward men who wear glasses—at least, according to children.

In several studies, when children were asked to draw a mathematician or scientist, girls were twice as likely to draw men as they were to draw women, while boys almost universally drew men, often in a lab coat. I decided to try this out at home with my 12-year-old son, who said, “Really anyone can be a mathematician, but this is your average one,” and promptly sketched a man in a checked oxford shirt with a pocket protector.

Persistent, subconscious images of male mathematicians and scientists that start at the earliest ages may be one explanation why girls enter STEM fields—science, technology, engineering, and mathematics—at dramatically lower rates than boys.

As an English teacher at a STEM magnet high school in New Jersey, I see these gender disparities in our engineering and computer science (CS) academies, even as our dynamic, thoughtful girls work hard to dispel stereotypes and recruit younger girls through coding camps and workshops. Our teachers certainly reflect the STEM fields of a generation ago: Three of our four CS teachers and engineering teachers are male.

The irony is that girls perform as well as boys in math. Nationally, math test scores for girls have been consistently equal to or within two points of boys in fourth and eighth grades over several years; middle school girls pass algebra at higher rates than boys. In science, girls perform on par with boys and enroll in advanced science and math courses at equal rates as they move into high school. And then something happens: A gender gap in participation starts to appear as girls take fewer of the more advanced STEM courses and tests as they get closer to college. This gap widens the longer girls are in school and is often compounded by issues of race and class.

Researchers don’t know yet if these continuing disparities in STEM reflect the slow pace of societal change, child-rearing expectations, or something deeper and more entrenched, such as the way we think about girls’ minds. But teachers can play a significant role in influencing or dispelling stereotypes in STEM education. Here are some studies from researchers and educators that may offer a few insights—and a few solutions.

The problem: One explanation for the gender differences in STEM participation may lie with those formative ideas about who a mathematician or scientist is.

Stereotype threat—the mere perception that a group one belongs to is not good at a task—has been linked to lower academic performance, according to researchers. When girls become aware through both subtle and overt cultural messages about male superiority in math, it makes each encounter with math and technology more fraught, triggering self-doubt in even the most studious young girls.

Both teachers and curriculum can inadvertently contribute to these perceptions.

In one striking study from 2015, Israeli researchers divided sixth-grade exams into two sets for grading: One batch was graded by the teachers and included students’ names, and the other contained no student names and was graded externally. In math, teachers graded boys higher, while external graders rated girls higher. Those low teacher grades then dissuaded girls for years to come.

Teachers often harbor these biases about themselves, too. Elementary school teachers are predominantly female, and many are anxious about teaching math, which can lead to lower achievement in math for girls. This persists into high school, where anxious teachers might be overly reliant on textbooks and rote methods of instruction. Images in those same textbooks can subconsciously trigger self-doubt in girls. One study found that when female high school students viewed chemistry textbooks containing pictures of female scientists, they performed better than female students who viewed textbooks containing only pictures of males.

Solutions: In response, researchers say teachers can foster a growth mindset in students by emphasizing that practice rather than innate ability improves performance. Other studies show that brief, targeted interventions in which students learn that intelligence is not fixed but can be improved through training and hard work can help them persist through challenges, a trait that, in math and science, should be particularly advantageous for girls.

Adding images of female mathematicians or scientists throughout classroom materials and assigning individual or group work that summarizes or contextualizes women’s achievements in these subjects can also shift perceptions about who belongs. 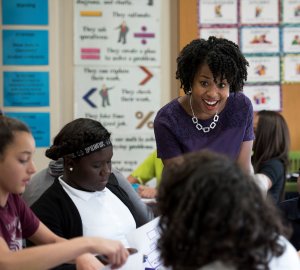 Tackling the STEM gender bias can also warrant some self-reflection on the part of teachers.

“For me, it starts with a belief, these expectations I have for all of my students, that all kids can learn—every teacher doesn’t have that belief,” says Cicely Woodard, a middle school math teacher in Franklin, Tennessee, and the state’s 2018 Teacher of the Year. “When the kids walk in the door I immediately believe they will get this content.”

Stanford University professor and researcher Jo Boaler recommends that female teachers avoid phrases that imply their discomfort or dislike of math—like “I’m bad at math” or “This is hard”—and get creative with assignments that show they are truly interested in the topic. They may also want to grade papers anonymously, where possible.

Barrier 2: The Question of Race and Class

The problem: Our assumptions about who does math well—and the academic and financial support that follows—may, in fact, impact performance more than raw aptitude. This has particularly profound implications for low-income students and black and Latino females, who are significantly less likely to take advanced STEM courses and pursue STEM professions later in life.

A recent study by Sean Reardon at Stanford University revealed that girls often do better than boys on math in racially diverse districts, while boys perform better in affluent white districts. He theorized that in higher-income communities, parents are more able and more likely to invest in enrichment for their children—like robotics camps or theater classes—that adhere to stereotypes. Children in these communities may also be more likely to see men in positions like doctors or engineers that reinforce the narrative about who pursues STEM careers.

Additionally, research “has clearly [indicated] that black girls view themselves as outsiders in mathematics and teachers view them as outsiders,” says Nicole Joseph, assistant professor of mathematics and science education at Vanderbilt University. Joseph points to tracking in math, more common in middle and high school than in the humanities, as a key structure infused with bias that restricts access to rigorous math education for black students.

Solutions: In a review of 62 studies on the perseverance of black women and girls in math, Joseph and her coauthors found that several measures can help build math identity and interest among black girls. For starters, schools can consider “structural disruptions” to how math instruction usually happens. San Francisco Unified School District, for example, recently eliminated accelerated math in middle school and allowed all students to take Algebra I in ninth grade—effectively ending tracking—which led to a rise in algebra test scores and a decrease in repeat rates for all students, including black and Latino students.

Educators like Norman Alston, a Seattle-based educator, and Patricia Brown, a technology integration specialist in Ladue, Missouri, are fostering mathematical interest in girls through after-school STEM programs. Alston requires middle school graduates of his program to teach younger students, and every speaker or expert Brown brings to talk to her female students is a woman of color, so students can see powerful, successful female mathematicians and scientists who look like them.

The problem: When it comes to teaching and learning STEM, research shows that the format matters.

A recent analysis of the admission tests to elite New York City high schools found that at Stuyvesant High School (considered the most rigorous in the city) girls had better grades in higher-level math, but overall had scored slightly lower on the admissions test, leading to lower admission rates. This is not because girls are worse at math, but may be because they guess less—a disadvantage on a multiple-choice test—and perform better with open-ended answers, according to the study.

Stanford’s Reardon and his colleagues drew similar conclusions after analyzing 8 million fourth- and eighth-grade national standardized test scores and finding that gender gaps correlated with multiple choice questions—as opposed to open-ended ones—and attributed to 25 percent of the difference in scores between males and females. 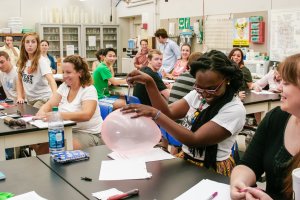 Solutions: Teachers may want to move away from multiple-choice tests—often a staple in math and science—and place more emphasis on open-ended assessments that allow students, especially girls, to demonstrate their proficiency through word problems or writing, where they feel more confident.

Other STEM educators are going beyond traditional STEM instruction in their classrooms to ensure that every child has a fair chance to learn math.

I hate when people say kids need grit—they have resilience, but need understanding of how to frame it in the content of the course.

As part of a pilot project at Georgia Tech to bring AP Computer Science to Atlanta students, teacher Shana White makes sure to use hands-on activities and real-world examples to supplement the online coursework and provide context and purpose for assignments.

“I hate when people say kids need grit—they have resilience, but need understanding of how to frame it in the content of the course,” says White, whose students are all African American, half of them girls.

Focusing on the interdisciplinary and problem-focused nature of STEM is key, recommends Dr. Jill Marshall, associate co-director of UTeach at the University of Texas at Austin, a program trying to confront the pipeline problem of STEM teachers from diverse backgrounds.

“Project-based instruction just generally draws in more people because it addresses problems that people see as relevant,” said Marshall. She cites a 2008 study from the National Academy of Engineering that asked people if they wanted to be engineers: Girls were twice as likely as boys to say no. But when asked if they would like to design a safe water system, save the rainforest, or use DNA to solve crimes, the girls answered yes.