School climate is something you can influence and monitor as assistant principal. Because of your visibility throughout the school, you can embody school climate for others at the same time that you keep an eye on it. Take its temperature, then work to manage it.

I recommend a daily temperature check about midway through the morning and then again after lunch. It doesn’t take much time. Between classes, listen to the sounds in the hallways, especially if you are behind a closed door and cannot be seen. Do a few classroom walkthroughs. Ask your front office assistants how things are going. Basically, do anything you can to quickly gauge the group’s attitude, state of mind, and feelings, as school climate is an indicator of overall morale (Gruenert & Whitaker, 2015), important in understanding your social system.

Tip: Data on school climate are not just numeric; they are observational. If you observe something time and again as you walk around your building that seems to influence feeling, or if something of great magnitude upends things, both are worthy of analysis.

A final point regarding temperature taking is that once you determine the climate on any given day, you can do something about it. Look for anything getting in the way of a positive, professional tone among students and determine the culprit. What you want to do is to look for the things that, if not urgently attended to, could result in people making bad decisions and getting in trouble. Then, spend some effort to correct if appropriate.

Tip: If school climate takes a dive, be a good steward, not a rescuer. If there is a legitimate reason for sadness or grief in the student body, don’t try to artificially reverse that. Use authenticity as your guide.

You can always do preventive climate maintenance. This might include ensuring you have clear expectations for behavior and consequences for misbehavior and that you gauge your efforts in terms of fairness and equity through data analysis (Austin, O’Malley, & Izu, 2011). What could be your data? They could include the number of office referrals, the number of tardies or absences, the number of students wishing to leave school early, and so on. 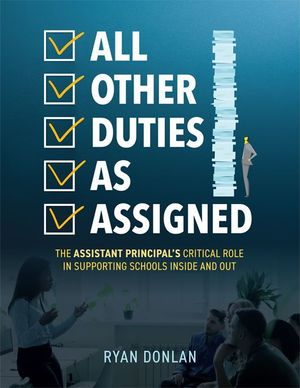 An example might be an overall downer of a mood because of a big loss at a sectional competition over the weekend. Get your team captains and athletic director to make an announcement after lunch thanking the students for their support and the coaches for all they have done, with a rallying cry for next year. Or perhaps you have a family whose house burned down. Why not set up a place in the cafeteria during lunch for the signing of a large well-wishes card and a donation station? Coming together to help provides positive energy. You might have some tension in the air with rumors that students are going to demonstrate because of an unfair or unjust situation. Meet with key communicators in the student body, listen to their concerns, assure them that you wish to help, and remind them clearly of the parameters through which demonstration would be appropriate and boundaries beyond which demonstration would result in consequences. Be proactive.

The point here is that you should not remain passive regarding school climate. Especially if there is hostility in the air, address it transparently. Don’t avoid taking action. Take the temperature, figure out what’s going on, and then work to do what you can about it. Remember the bigger picture and your responsibility to it.

In every classroom, cafeteria, and commons area, groups of people form. We have in-groups, out-groups, cliques, and crews. Wes and theys. Yet, Is are everywhere: individuals searching for a place of dignity among others. Just like there is a tug between institutions and individuals and the roles expected of people, the same exists between groups and the individuals within them. Studying these disconnects helps you develop a nuanced ability to see your school with a wide-angle lens. You can almost predict the forces at work that will influence behavior, even before the behaviors occur. I suggest in order to gauge how your social system is doing, pay particular attention and study the behaviors of individuals while they are in the group versus when they are on their own. It is all a part of your school’s culture.

Tip: When you see a student not with a group that student typically frequents, one of a handful of things might be going on. First, of course, it could be nothing. Or, the group might be ostracizing the student, or the student might be struggling with someone in the group. Keep an eye on things.

In every group, norms exist that create expectations for membership. These norms define how members of the group behave, what they are supposed to believe, and, even more deeply, what they value. Those with more influence within the group serve as living ideals of group identity, and observing their interactions will help you predict what might be coming your way. Look at the groups’ daily membership. Look for disconnects. Who is not with the group who usually is? Differences here could signal a conflict or something else negative. What about typical group interactions? Are they normal (and hopefully positive), or is there any disproportion to who is the butt of jokes and recipient of sarcasm? I have seen it happen because of dating and relationship decisions (where students enter in to relationships with friends’ former significant others, and others feel they must align accordingly). Sometimes, a group may decide as one that the behavior of certain members has become extreme. I recall one instance that had to do with substance abuse, and the person who was no longer with peers was in dire need of an intervention, not the ostracism and distancing this person was receiving. Particularly with younger students, I have found that when students withdraw from peers, the problem might not lie with the people or situations that the students avoid; it might be something outside of school creating consternation, worry, or self-isolation.

Don’t just look on the surface. Watch what happens when the group disperses and moves to class. Discern the nuances. How do the members behave when they become individuals once again and walk down the hall? Don’t discount your intuition when looking to understand your ecosystem; don’t write the little things off as happenstances or side effects of something obvious but perhaps inconsequential. Goleman (2013) notes that what we see as side effects in systems are misnamed; they are instead effects of the system. Thinking that a system has side effects is flawed understanding; all happens for a reason.

In viewing group and individual dynamics, zoom in, pan out, and scan elements both micro and macro. Look group to group as well. I like Goleman’s (2013) description of how an “emotional aperture, the ability to perceive such subtle cues in a group, operates a bit like a camera. We can zoom in to focus on one person’s feelings, or zoom out to take in the collective” (p. 239). And pay attention to trends over time, those that escape the immediacy of the moment. Don’t miss invisible things that influence the school environment over time, yet are ever-present:

We are finely tuned to a rustling in the leaves that may signal a stalking tiger. But we have no perceptual awareness that can sense the thinning of the atmosphere’s ozone layer, nor the carcinogens in the particulates we breathe on a smoggy day. Both can eventually be fatal, but our brain has no direct radar for these threats (Goleman, 2013, p. 143).

It behooves assistant principals to spend time in effortful, nuanced observation, when supervision allows. Stand around with a purpose. Don’t just look at what your students are doing; look at what they’re not doing. Think about things from your standpoint, but also theirs. How are they seeing the world, right now, through their eyes? What influences might exist for their behavior and what could these say about others? Contextual cues are our gifts; they signal what is visible in front of us as well as what is invisible yet still adjacent. If we ask ourselves, “What might this mean?” a healthy curiosity will serve us well in environmental prevention through observational acuity.

Used with permission. Excerpt from All Other Duties as Assigned: The Assistant Principal’s Critical Role in Supporting Schools Inside and Out by Ryan Donlan. Copyright 2022 by Solution Tree Press, 555 North Morton Street, Bloomington, IN 47404, 800.733.6786, SolutionTree.com. All rights reserved.