Independent reading is a consistent aspect of my eighth-grade English class that increases reading comprehension skills, builds vocabulary, and fosters a love of reading. Throughout the year I create four theme-based independent reading units, where all students read books of their choice within a common theme.

This year, I decided to design my first independent reading unit around the theme of exploring identity. This theme connects to the social and emotional learning goals I have for my adolescent students, who are growing, changing, and discovering who they are and what they believe.

Students begin the unit by choosing from a list of novels that tell the story of a character learning more about who they are and how they fit into the world.

They are also able to choose a book that’s not on my list as long as it fits the theme. Before students make their choices, I spend time doing book talks around some books on my list and encourage those who have previously read any of the books to share their informal review with their peers. Here are some of the books that my eighth graders chose to read for this unit:

While students are reading, I will periodically have them answer questions, respond to journal entries, participate in discussion prompts that encourage social and emotional learning, and explore the characters’ identities as well as their own. Here are a few sample prompts:

After finishing their reads, students describe the main character of the book through a visual representation of an iceberg—either digitally or on paper—using words, quotes, and images. Above the waterline, students include the descriptors that everyone in the story knows about the character. Below the waterline, students include the character’s emotions, beliefs, fears, family dynamics, past experiences, hopes, etc. Students then present the icebergs to their classmates during a book talk to spark interest in other students to read the book without giving away any major plot points. 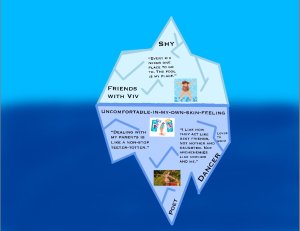 Then students use the same format to create an iceberg that represents themselves and their own identity. They can share these with their peers or keep them private—between themselves and me—depending on how comfortable they feel about sharing their stories.

At the conclusion of this free reading unit, students consider how the character, themselves, their friends, and everyone has things going on underneath the surface that might impact their interactions with others, their self-images, and the choices they make. Below are a few questions to encourage them to think through these ideas.