In the past several years, the National Endowment of the Humanities (NEH) has supported and funded digital games, including Mission US: City of Immigrants, a game about the immigrant experience. You play as Lena Brodsky, a Jewish immigrant in 1907 New York. It’s a great teaching tool: Students quickly realize how difficult it can be to assimilate to a new country. The game includes an Educator Guide with lesson plans and primary sources.

I recently spoke with Marc Ruppel, senior program officer at the NEH. Ruppel’s vision of games in classrooms happens to align with my findings in field research: Games—particularly those in the humanities (social studies, English language arts)—can be the hub, or centerpiece, of learning in a classroom. Related activities—written reflections from students, as well as other media like video and text—extend outward, like spokes. There are several games about the immigrant experience that can function as hubs for meaningful classroom teaching.

Games to Teach the Immigrant Experience

In my social studies class, I teach an immigration unit that begins with BrainPOP’s Immigration and Citizenship videos. Then students play several “serious games”—games about serious topics. The Migrant Trail, set on the Arizona/Mexico border, is one. The free game is related to the documentary film The Undocumented. First I show students the Map of the Documents, an interactive Google map on the site—it’s a chronicle of migrants who did not survive the desert journey. Next, students play the game twice: once as a border patrol agent, and again as a migrant, and then answer an open-ended prompt. 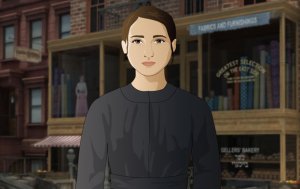 To frame themes of immigration, try iCivics’ free Immigration and Citizenship game. It includes questions from the U.S. naturalization test and culminates with the video game Immigration Nation. Also play Parable of the Polygons, an “explorable explanation”—or playable blog post—on the makeup of society.

High school students can play Papers, Please—a serious game about being a border patrol agent checking passports in a fictional Communist nation in 1982. Play it yourself first to see if the content is appropriate for your students. In early February 2017, the designer, Lucas Pope, raised almost $50,000 for the National Immigration Law Center, the American Refugee Committee, and the American Civil Liberties Union.

Games to Teach the Refugee Crisis

There are several immigration-themed games that can be the hub of classroom teaching. One of my school colleagues has developed a series of lessons to teach the Syrian refugee crisis. He uses the BBC’s Syrian Journey: Choose Your Own Escape Route as his hub. Similar to the branched storytelling in the classic Choose Your Own Adventure books, it is a playable blog post with threaded endings.

His Syrian refugee unit centers on empathy, as well as on reading and writing about current events. Students are first asked to write journals from the perspective of a Syrian refugee. Prior to the game, other media are used, including the video clips “Syria: Child Refugees Miss Out on School” and “What’s Happening in Syria?” These are followed by the prompt, “How many refugees have left Syria since the beginning of the war?”

Next, students read through Bana Alabed’s Twitter feed. Alabed is a 7-year-old girl who, with her mother, fled Syria. They both live in Turkey, and Alabed regularly tweets about the refugee crisis. My colleague also has students view videos on the I Am Syria website, answer questions, and create a Venn diagram comparing their lives to those of children in Syria. My colleague requires diagrams to have at least eight differences and four similarities.

When students play Syrian Journey, they take notes on the decisions and choices made, and describe the difficulties and challenges faced. As Syrian refugees, readers decide whether to deal with smugglers or to take a dangerous raft ride across the Mediterranean Sea. The culminating activity is a student journal that includes the country they are headed to and whether asylum was granted, and also includes the push and pull factors of immigration, which are part of our content standards.

In my classes, students take part in “Genius Hour” or “20 percent time.” Each Wednesday—one day is 20 percent of the week’s class meetings—students design passion projects based on their interests. This concept started at innovative companies like Google, and many teachers have adopted it in their classrooms. Typically, I give my students a theme as a design challenge. Last fall, the theme was the Electoral College. 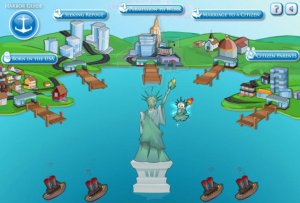 In early 2017, we began a Genius Hour theme on the immigrant experience. I adapted the free resources at Games for Change. Students proposed projects like comparing immigration in different eras, and exploring code switching—the cross-cultural fluency that immigrants develop when adapting to a new country. The projects don’t have to be games: Some students are using Storyboard That to create graphic novels, while others are interviewing immigrant family members and publishing the interviews on StoryCorps, a podcasting site for oral histories.

And some students are designing games—using, for example, BreakoutEDU. To play, you figure out a series of puzzles that open a series of locks. As a result, students are embodying the push and pull factors of immigration through the core mechanics of a breakout and escape game. Other students are creating location-based games using ARIS, TaleBlazer, or GooseChase. I shared Jewish Time Jump, an ARIS location-based game about the immigrant experience. Set in Greenwich Village, New York, in 1900, it is playable on a smartphone.

Teachers can facilitate learning around and about immigration games with whole-class discussions. To promote empathy, assess students using reflective practices, where students extend the role from the game world to journals and open-ended writing prompts. Students write from the perspective of an immigrant. With Genius Hour, I use Google Forms to assess students with open-ended questions.