Credit: David Julian
A crew of Tulane undergraduates, employees, and alumni volunteer to clean classrooms and help with repairs at the New Orleans High School for Math and Science. 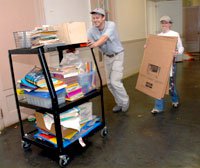 Credit: David Julian
A crew of Tulane undergraduates, employees, and alumni volunteer to clean classrooms and help with repairs at the New Orleans High School for Math and Science.

Tulane University has staked its future on the likes of Sarah "Sally" Baker. The effervescent nineteen-year-old college freshman from Ogdensburg, New York, considers rebuilding New Orleans an "obligation." After spending her first semester as a Tulanian at Syracuse University -- enrollees scattered when Tulane was closed for the fall 2005 semester -- Baker returned to New Orleans in January and was promptly elected chair of community service for her dorm. Now the public health major organizes community projects for about half of the 250 students living there. The projects are voluntary, but Baker says, "if you're apathetic, you don't belong here. If public service discourages students from coming to Tulane, they are not our kind."

This is just what Tulane president Scott S. Cowen dreamed would be the reaction as he talked up the university to his displaced student body last fall. He had a hard sell. Tulane's losses from Katrina totaled more than $300 million. Dorms flooded, destroying student property. The athletic center and outdoor sports facilities suffered water damage. Academic buildings and the main library took in floodwater, wiping out years of research. Worst of all, New Orleans was in ruins, depopulated, leaderless, and uncertain. It was not the boozy, jazz-filled melting pot that had attracted students to Tulane for more than 170 years.

So Cowen made a bet: Retention and recruitment could hinge on engaging Tulane students in the city's recovery. "If it is not in your DNA to rebuild Tulane and New Orleans, don't come back," Cowen said in Internet chats and town hall meetings with students spread among 590 institutions nationwide. It worked. Of the 12,500 students registered at Tulane, 10,000 returned in January. Cowen's message, says Baker, "is the reason we came back. All of us who came back are in."

Credit: David Julian
Alice Harte Elementary School, in Algiers, gets a fresh coat of paint thanks to volunteers involved in the Paint Rally for New Orleans Public Schools.

Credit: David Julian
Alice Harte Elementary School, in Algiers, gets a fresh coat of paint thanks to volunteers involved in the Paint Rally for New Orleans Public Schools.

Last semester, being "in" was purely voluntary, but beginning in the fall, Tulane will be one of the few private universities to make public service a requirement for graduation. It will have a new Public Service Center, and students will be required to take service courses, create a public service project, or conduct a service-oriented independent study. At minimum, forty to sixty hours of service will be mandatory to receive a diploma.

Many of those projects focus on the city's devastated public school system. Tulanians painted and gardened at Capdau Middle School and McDonogh 35 Senior High School, for example. They tutored kids and assisted teachers overwhelmed by the task of reestablishing course materials in nine schools around the city. "We are doing everything," says Natalie Cox, who was on track to graduate in June. "We are teaching assistants; we are cleaners, and fixers of computer systems." One Tulane student even organized a drive to restart one school's band, she adds.

As a preview of what's to come, Tulane professors have retooled class content to emphasize service. MBA student Kevin Gremillion, for example, was on a team last winter that helped local businesses write disaster plans in case another hurricane should strike, and Cox took a course called Contemporary Narratives of Trauma, Shame, and Guilt, which touched on Katrina-related themes; students enrolled in the class participated in public service projects.

Privately, Cowen knows the public service ploy may not have legs much beyond the immediate crisis. "The problems in New Orleans are off the front page," he says. "The program may not be the draw in the future that it is now."

One red flag: Some students who raced back to campus last winter quickly settled into complacency. Despite wind damage, the Uptown section of New Orleans, home to Tulane, was relatively unscathed by the storm. Students who don't stray far from Uptown remain in the "Tulane bubble," says Cox. "It's easy to forget what's going on in other parts of the city."

Sally Baker admits she's taken a gamble in coming back to Tulane. "I definitely have it in the back of my mind that Tulane and New Orleans may not make it," she says. "Still, I must give it a shot."

Nancy Rutter Clark, a freelance writer based in Atherton, California, was a resident of New Orleans until August 29, 2005.