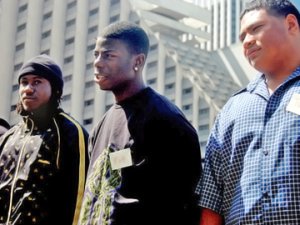 On a sunny Saturday morning in the San Francisco Bay Area, two groups of high school juniors from nearby Emeryville and Richmond step from a school bus to check out an underused public space along the Berkeley waterfront -- a running path laid out on a landfill. The morning reconnaissance is part of Y-PLAN (Youth -- Plan, Learn, Act, Now), a city planning program run by the University of California at Berkeley's Center for Cities & Schools. As traffic barrels along the nearby freeway, students glance around curiously. They are new to this patch of land, even though it's relatively close to where many of them live.

To help the two groups of students get to know one another, Y-PLAN coordinators ask them to give their names as well as something they appreciate about their own neighborhoods. A few mention the freshness of living by the water; others refer to the ability to walk to a grocery store or local basketball court. One young woman, toeing the ground, shrugs her shoulders and mumbles that she can't think of anything she likes about the gritty section of Richmond where she lives. "I don't feel safe there," she says. Others nod knowingly.

For inner-city kids who've grown up with poverty and crime, this sentiment is understandable -- and not unusual. Because the idea of neighborhood has as many negatives as positives, many Y-PLAN students admit to approaching their local project assignments with initial skepticism. But after twelve weeks of working in teams with UC Berkeley mentors to gather a big-picture view of urban planning, including conducting surveys and site research, crafting proposals for two community centers in their respective neighborhoods, and presenting their ideas to a panel of urban-planning professionals, Y-PLAN participants had a new sense of possibilities.

"Y-PLAN changed my perspective," says Julio Arauz, a student at Richmond's John F. Kennedy High School. "It's not just the negative aspect you have to look at. You have to look at the potential -- the bright side of things."

Through the knowledge that they, too, can affect their communities, Y-PLAN students came to some of the same conclusions as the program's founders: Young people have valuable ideas to bring to the city planning table, and educational revitalization can be a catalyst for community revitalization -- and vice versa.

Now entering its tenth year, Y-PLAN is "the heart and heartbeat of the Center for Cities & Schools," says Deborah McKoy, creator of Y-PLAN and the center's founder and executive director. Winner of numerous awards from such groups as the Architectural Foundation of San Francisco and the California Campaign for the Civic Mission of Schools, Y-PLAN is held every spring for twelve weeks, usually in conjunction with ninth-, tenth-, or eleventh-grade social studies or history classes in hard-pressed East Bay communities. Graduate and undergraduate students in urban planning at UC Berkeley lead a rigorous project-learning curriculum; through initial brainstorming sessions to design sessions to formal presentations for city officials, high school students become stakeholders in the city planning process.

"After they critically analyze the places they are in," says Center for Cities & Schools program manager Ariel Bierbaum, "they learn the process by which those places get transformed -- and their role in that change process."

Past Y-PLAN projects include the redesign of the historic West Oakland train station and a neglected Oakland minipark. This spring, students at Emeryville's Emery Secondary School and in John F. Kennedy High School's Architecture, Construction, and Engineering Technology (ACET) Academy developed recommendations for two projects: a wellness center located in an unused part of the Emeryville school building (designed to serve as a youth and family destination for health and recreational services) and the Martin Luther King Jr. Community Center and Park, a cornerstone of an ongoing revitalization of Richmond's Nystrom neighborhood.

For city planners and administrators who'd been given the task of developing youth programming for the centers, Y-PLAN offered an opportunity to hear from the kind of young people who would be served by centers like these.

Many of the projects Y-PLAN students work on are so large in scale that any effect of the students' input may not be immediately obvious -- no train station or community center can be redesigned in a matter of months. Although student feedback has sometimes influenced city planning decisions, it doesn't necessarily sway them. Still, the overall impact the program has on both the student and professional perspective appears to be significant.

"Y-PLAN makes folks who deal with cities and urban centers aware of the incredible importance and value of public schools," says Deborah McKoy. "Urban public schools are often seen as 'the problem,' when in fact what I think we learn from Y-PLAN is how much a part of the solution they are."

At the two schools' final presentations for city administrators, council members, engineers, and architects, students showcased scale drawings and three-dimensional models of each building, backed up by explanatory posters and Microsoft PowerPoint slides with detailed proposals for how the buildings might best be used. Richmond students emphasized the necessity for a tight security staff, a public gun drop-off, and social services such as driver's education, job training, a walking path, and a child-care center. They also proposed replacing a dilapidated playground with a garden or even a café to draw in more "customers."

Emery students presented their wellness center as a place to do homework, make art, use computers, and see counselors. To transform what they described as "a very empty and very dark" space, they incorporated in their design plants, murals, and large windows. They also had a variety of propositions for unused public spaces nearby that could be converted into parks.

Some site aspects students referred to, such as a lack of trash cans or a prevalence of broken gates, "frankly had me squirming," says Richmond city manager Bill Lindsay. "Why aren't we doing this? These ideas are simple and practical and can happen right away." Because budgets are chronically tight, many of the larger, more hopeful suggestions had little chance of coming to fruition in the near term, but the presentations nevertheless had a revelatory and empowering effect.

"Seeing what they want for themselves has been an honor," says Emery participating teacher Madenh Hassan.

"Y-PLAN is a good opportunity for us, because we can actually speak our minds," says self-assured Emery student Chantell Brown. She hopes the Emeryville center will be, among other things, a safe place where young people can go after school -- something teens in low-income, high-crime communities desperately need. She was eager to tell developers, educators, and city administrators "what the 'real' is, what we see every day, what we have to go through."

"Sometimes adults don't take us seriously," adds her classmate, Yesenia Cuatlatl. "Y-PLAN is a good idea because sometimes we say, 'Oh, they really need to change this,' but we don't do anything; we just talk about it."

Judging from the enthusiasm of their audience, the students' work -- and the determination that went with it -- helped adults take them very seriously indeed. As Bill Lindsay told students, "If you ever want to talk about city management as a long-term goal, please give me a call."

Y-PLAN is transformative, says Ariel Bierbaum, for both the audience (civic leaders and urban planners) and for the young presenters, who "gain facility with a new vocabulary and advocate for themselves in a civic space. Even though it's just a semester, from what I've seen, I think the kids hold on to that."

Many students do hold onto the experience -- and not just symbolically. As Y-PLAN introduces them to a spectrum of employment opportunities in urban development, planning, politics, and administration, some pursue related careers, many at UC Berkeley. "Without doing Y-PLAN, I don't think many students would have been exposed to those professions, or would even have known they exist," says Jeff Vincent, deputy director of the Center for Cities & Schools. Although the university is a local resource for these students, some do not see prestigious UC Berkeley -- or any college -- as a real possibility. Y-PLAN, which includes a tour of the Berkeley campus and tips on the admissions process, helps make college a more accessible option.

Y-PLAN has also had ripple effects nationwide: From 2000 to 2005, the Center for Cities & Schools worked with the U.S. Department of Housing and Urban Development (HUD) to adapt the Y-PLAN model to HOPE VI, a public-housing-redevelopment initiative. In partnership with thirty-seven cities and more than 500 students, Y-PLAN coordinators led multiple-day "urban-planning boot camps," creating, says Deborah McKoy, "a national network of youth who live in public housing, and who then were a part of the redevelopment of their communities."

And in 2007, Alissa Kronovet, a former Y-PLAN mentor and a graduate of the city planning master's program at UC Berkeley, gathered students from both coasts to form the Young Planners Network (YPN) -- what McKoy refers to as "advanced Y-PLAN" -- an opportunity for students to attend planning conferences and network with students from other cities across North America. The YPN was created after Kronovet and an initial group of fifteen students from the Bay Area and Brooklyn met and worked with students from New Orleans at last year's Planners Network Conference. Participants were eager to continue learning, meeting one another, and, as YPN participant and Emery student Deszeray Williams puts it, "make a career out of helping make my community a better place." In April 2008, 100 people attended the first YPN conference, held in New York City, and a conference is scheduled in Berkeley for next spring.

Now that the program has been running for almost a decade, Center for Cities & Schools staffers have put together a "Y-PLAN Handbook," a step-by-step guide available to the center's school and community partners. Although Y-PLAN is a labor- and resource-intensive undertaking, its founders have high hopes for its scalability -- and, ultimately, for sustained, systemic change in communities and schools.

It's a daunting task, of course, but the Y-PLAN approach embraces one key idea: Start with the kids. "Even though we may not say it, we care about our community as much as adults do," says student Chantell Brown. "We did Y-PLAN so that we could have a voice."