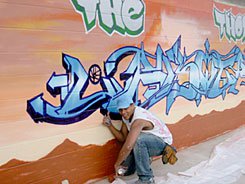 The musical elements of hip-hop -- the DJ, the MC, and break dancing -- seem incomplete without the spray-can-blasted messages that graffiti writers use to adorn the walls of their concrete jungle. "Graf," the typeface of counterculture, provides a sense of community to its participants. Much of this stems from an illegal allure, as the act of defacing an overpass above a well-trekked intersection elevates the status of the Krylon-wielding scribe.

Though it's an act of vandalism, graffiti is also regarded as an artistic style, as much a contemporary statement as the early Dadaists painting on urinals to make bold statements against World War I. In some neighborhoods, graffiti is one of the few creative outlets for youth expression.

The nonprofit Youth Struggling for Survival (YSS) recognizes the artistic dexterity in graffiti writers and uses it to connect teens to their ancestral and spiritual roots, encouraging a message of peaceful unity while shunning the bling and violence of commercialized hip-hop and gangster rap. On South Dakota's Pine Ridge Reservation, for instance, YSS graffiti artists -- some former gang members themselves -- paint murals representing the indigenous Lakota nation on the walls of Pine Ridge High School; they integrate cultural phrases and symbols such as the medicine wheel and the four elements into the colorful pieces. A year later, "the murals are still up and have not been tagged over," says YSS executive director Frank Tekpatzin Blazquez. "The murals were signs of respect."

In September, YSS will extend its outreach at the School of Social Justice, one of four learning centers within the new Little Village High School, in the gang-laden Greater Lawndale neighborhood of Chicago's Southwest Side. YSS plans to bring in its Urban Roots program, which will incorporate break dancing, poetry, and graffiti into the curriculum and into tools of teaching, providing a connection between the streets and classroom learning. "These fourteen-year-olds are at a volatile stage," says Blazquez. "They have so much energy that needs to be harnessed. We want to provide a positive outlet, with mentors."

Encouraging youth to express themselves through art that's part of their culture -- if done constructively in their community, under the supervision of inspiring teachers -- is hardly a crime.