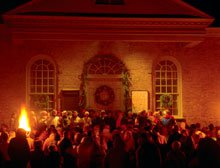 "They aren't real, are they?" asks the gentleman to my left when a local apothecary describes the pine and boxwood wreaths in his shop windows on Colonial Williamsburg's main street. Others in our tour group chuckle, but, frankly, I am glad he asked. From my vantage point, I can tell the sinuous greenery is natural, but the cloved oranges, pinecones, and cinnamon sticks are so perfect, they must be artificial.

Dressed in eighteenth-century holiday attire, our guide assures us that the materials, customs, and methods used in the town's Christmas celebrations are authentic -- a recurring theme of my visit to the nation's most sophisticated restoration project.

We complete our walking tour as the week's lingering clouds begin to clear. Stillness settles over the streets as I walk back to the Williamsburg Inn to freshen up for the highlight of my holiday -- the lighting of the community Christmas tree at Market Square. Admiring the golden radiance of the venerable inn's candlelit windows, I contemplate the pageantry and wholesomeness of the spirit Christmas Eve bestows on Virginia's former capital.

Of course, Williamsburg's yuletide season has had its darker moments. In 1702, a group of rebellious schoolboys engaged in a nefarious English ritual called "barring out." Childhood was still a nebulous concept back then, and Christmas was not an officially sanctioned school holiday in the British colony's fledgling seat of government. Displeased, young pranksters stockpiled weapons and supplies and, late on Christmas Eve, barricaded themselves in the schoolhouse. Hearing the commotion, the schoolmaster and two servants raced to the building and tried to break down one of the doors. The boys fired their pistols, wounding one of the servants. The schoolmaster reported, "I then resolved to let them alone till morning, and then getting all the other masters together & calling for workmen to break open the door."

Three years earlier, England's King William III and Queen Mary II decreed that the crown's most populous and prosperous colony deserved a more sophisticated capital than Jamestown. London's most revered architects planned the structured city, anchored by the Capitol, the College of William and Mary, and the Governor's Palace.

Williamsburg quickly rose in prominence and became a commercial, cultural, and political nexus of the British Empire. Called "a fountainhead of sedition," it also served as an incubator for American democratic ideals. Patrick Henry shook the House of Burgesses with his revolutionary orations; local patriots such as George Washington and Thomas Jefferson led spirited political debates in their favorite taverns.

Following American independence, Jefferson, the second governor of the State of Virginia, moved the government to Richmond, and Williamsburg fell into a sleepy trance. By the early twentieth century, many of the city's landmarks had fallen into disrepair or had burned down or otherwise disappeared.

In 1926, oil magnate John D. Rockefeller Jr. led a campaign to return Williamsburg to its colonial glory, funding restoration of original houses, taverns, and shops -- as well as the reconstruction of the Governor's Palace and the Capitol. A 173-acre historic district became the core of America's premier livinghistory site, which today covers more than 300 acres. Up to 1 million or more visitors witness the fruits of Rockefeller's labors annually.

From Thanksgiving Day to January 6 (the Feast of Epiphany), Williamsburg celebrates its most enchanted season and serves up colonial yuletide traditions with all the trimmings. On Saturday, December 3, the forty-sixth annual Christmas Homes Tours affords curiosity seekers a peek inside Williamsburg's most festive private residences. The seventy-first Grand Illumination, held the next day, officially kicks off holidays with live musical performances, hands-on demonstrations, and fireworks; other fun includes children's weekends, museum tours, and dances. Local taverns honor their heritage with spirited holiday fare -- bring a hearty appetite and an adventurous palate.

And, of course, there's Christmas Eve. Under the sparkle of an early winter sky, I arrive at Market Square just as other visitors and townspeople are encircling the tree. With great expectation, the towering evergreen illuminates the twilight, and stories and carols of Christmases past soften the evening's chill. The gift of a Colonial Williamsburg Christmas heralds the year's most magical night.

Celebrate the season at a few of the nation's most illuminating holiday festivals: