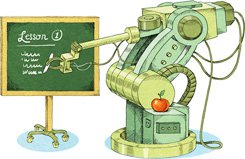 Robots have long been the stuff of sci-fi movies, from the rabble-rousing fembot in Fritz Lang's classic silent film Metropolis to the maniacal micromanager HAL in 2001: A Space Odyssey and the Teutonic Terminator (who came back from the future to become governor of California). Film robots have been fecklessly funny (C-3PO) and ferocious (those evil Star Trek Borgs), yet what they all had in common was that they were fictional.

Now, bots are hot, they're real, and they're a growing part of secondary school curriculum. Sebastian Thrun, a professor of engineering at Stanford University and director of the Stanford Artificial Intelligence Laboratory, leads a team at the school that competes in the DARPA Urban Challenge, where highly sophisticated robot cars must handle simulated real-world traffic conditions. Thrun sees an increasing number of freshmen entering Stanford with head starts in robotics. "I find that there's an enormous awareness and fascination with regard to robotics in the incoming student population," he says.

This awareness may start early, as Web sites such as Instructables.com offer information on how parents (or teachers) and kids can build small robots. The rise of robotics now showing up in school science curricula, often starting at the elementary school level, can be credited to inventor Dean Kamen, who launched the FIRST (For Inspiration and Recognition of Science and Technology) Robotics Competition in 1989, in which student-designed robots engage in a last-bot-standing battle royale. Now, more than 32,000 students on 1,500 high school teams from all over the world have competed, and the FIRST Lego League and Junior FIRST Lego League have brought robotics to kids ages 6-16.

Fueling student interest in robots, aside from the sheer fun of constructing a mechanical Mini-Me, is the use of robots for increasingly complex applications in the real world. A three-legged, nonhumanoid "spider" robot created by Elon Rimon, a professor at the Technion-Israel Institute of Technology, in Haifa, can search for survivors in collapsed buildings and perform maintenance in dangerous places such as nuclear reactors. Robots are already being used for heart and knee surgery.

Preservice teachers at Emporia work in collaborative groups -- templates for those that will be replicated with their students -- to construct computer-programmable Lego robots, in order to take into their classrooms an array of project-learning skills. Emporia is planning to partner with I Support Learning, which recently sponsored a Search and Rescue Robot Challenge for teams from the United States and China, a challenge now echoed, tragically, in the recent Sichuan earthquake.

Work is in progress to bring teacher-friendly robotics into the classroom. Tom Lauwers, a doctoral candidate in computer science at Carnegie Mellon University, is one of the developers of a program called CSbots. "In high schools and colleges, there's a significant drop-off of interest in computer science," Lauwers says. "In part, that's because many students find the initial work very boring. The idea behind CSbots is to allow students to program not a computer, which can be very dull, but a robot. They learn the same basic concepts working with a robot, but it's much more interesting. And robots have an element of coolness with students that computers lack."

Lauwers points out that prebuilt robots used for the course can be purchased for as little as $150. "We put together a pilot program where we sent a robot to seven high school science teachers around the country," he says. "We asked them to develop a curriculum using the robot, because we wanted to involve teachers from the beginning by asking the question, 'How do you derive technology based on the learning goals of your students?' It turned out they were able to engage their students both in class and outside."

We're not likely (we hope) to see robots as teachers any time soon, but as teaching assistants, we may find them to be indispensable.