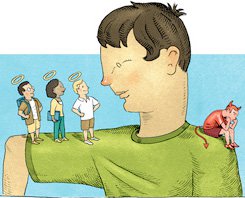 In the coming school year and beyond, teachers, and policy makers will develop and advocate for programs that leverage the best practices of two intersecting movements: character education and social and emotional learning (SEL). Activities and standards based on topics such as conflict resolution, violence prevention, and communication skills are expanding throughout the regular school day as a movement to bring values and personal strategies into public school classrooms gathers steam.

Organizations such as the Character Education Partnership (CEP), the Collaborative for Academic, Social, and Emotional Learning (CASEL), and the Association for Supervision and Curriculum Development (ASCD), as well as newly minted districtwide and statewide initiatives, have seen measurable success in promoting these skills as fundamental to student achievement -- academically, socially, and professionally, in and outside of school.

"People don't send their kids to school just for the accumulation of isolated bits of knowledge," says Maurice Elias, psychology professor and director of the Rutgers Social-Emotional Learning Lab at Rutgers University (and an Edutopia.org blogger). "If you look at the history of education, it really is about character development -- implicitly or explicitly."

Initially, character-education curriculum included the concepts of civic responsibility and ethics and the cultivation of a caring school environment. SEL, meanwhile, has tended to prioritize specific interpersonal and decision-making skills. Now, Elias and others predict, the functional merger of social and emotional learning and character education is approaching. Given the variety of nascent strategies, however, it's still unclear which term will draw the broadest following.

The SEL Lab at Rutgers University, for instance, recently developed a hybrid model called Social-Emotional and Character Development (SECD), part of the Developing Safe and Civil Schools (DSACS) initiative, in an effort to broaden the reach and scope of smaller, more specialized character-education and SEL programs in New Jersey schools. Similarly, the ASCD's "Whole Child" campaign delineates holistic requirements for student success that promote many practices (such as bullying prevention) often included in SEL and character-education models. And the Ohio Department of Education recently established what it terms "School Climate Guidelines" that advance social and emotional and character development through respect, motivation, and safety at school.

Other states and districts are stepping up to the plate: New Jersey provided strongholds for character- and SEL-related skills with the creation of the New Jersey Character Education Partnership in 2000, Illinois became the first state to use the term SEL in its benchmarks in 2004, New York State was close at its heels in 2006 with its own guidelines, and Alaska's Anchorage School District has proved a beacon through a comprehensive set of social and emotional guidelines, standards, and goals for all students.

Marvin Berkowitz, codirector of the Center for Character and Citizenship, at the University of Missouri at St. Louis, and lead author of a 2005 study called "What Works in Character Education," predicts a rise of these kinds of state- and district-level initiatives, particularly if we take a broad view of character education. "SEL, violence prevention, service learning -- they're all part of the same thing," he says. From his perspective, the most effective aspects of character education or SEL practices are simply "the means to an end," the end being the healthy, prosocial development of young people.

For educators who have long incorporated character skills in their teaching, this is nothing new. But the increase in awareness, resources, and high-level intention directed at character education means they will have growing support and more company in the future.