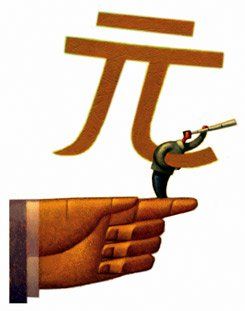 PREDICTION: Chinese will be the new French.

Across the country and the world, Chinese language learning is exploding. What had been a mysterious and arcane language studied only by Asian specialists is now the subject of fast-growing interest in schools and universities.

In 2004, according to the Asia Society, 263 American schools and school districts offered Chinese. That number had increased to 477 by May 2007, when the College Board's Advanced Placement exam in Mandarin was administered for the first time. In addition, Minnesota, Oregon, and Utah all have pending legislation to fund Chinese-language programs in their schools. This linguistic sea change is tidal, not sudden, but the trend toward the teaching and learning of Chinese, particularly Mandarin, as a valuable new second language, is clear to see.

Trained teachers of Chinese are in short supply in American schools, however, so the Chinese government has stepped in to help, and the Freeman Foundation, which fosters East-West understanding, has funded six universities to develop teacher-training programs for Chinese. From first graders in immersion programs to MBAs seeking high-paying posts in Shanghai, the number of people learning Chinese is growing fast.

In response, the Chinese Ministry of Education developed Chengo, a Web site for English-speaking secondary school students, and China's National Office for Teaching Chinese as a Foreign Language has established Confucius Institutes to promote Chinese language and culture around the world, in partnership primarily with local universities and public school districts. In the United States, these facilities are located at more than a dozen universities and on a Chicago Public Schools campus.

The establishment of these institutes could go a long way toward clearing up misunderstandings about Chinese language and culture. For example, Mandarin, the official national dialect, has four tones, often the most challenging part of learning Chinese for English speakers. One sound, such as "ma," can be written in many ways with such diverse meanings as "mother" or "horse," and each must be correctly pronounced in one of the four tones. Regional dialects, such as southern Cantonese, involve widely varying pronunciations but all share the same characters. (In terms of regional variations, American English isn't that different.) To read a newspaper requires knowledge of about 4,000 characters.

But within this complexity lies simplicity and beauty. Unlike Romance languages such as French, for example, Chinese requires no conjugation of verbs and shifting of tenses. The Chinese simply say when an event oraction occurred. Chinese characters, often quite daunting at first, have their own system of roots, called radicals, that give clues to their meanings. For instance, words related to water all share the same three "droplets" on the left side of the character. Mastering the writing of characters has the additional benefit of opening a window on the world of Chinese calligraphy, regarded as one of the highest art forms, traditional or modern.

And those who do take up this activity are in good company: As a Chinese official said at the announcement of the AP Mandarin exam, "Many Americans think that Chinese is difficult to learn, but we have more than a billion people who speak it."