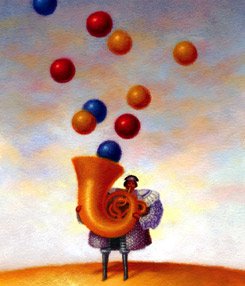 PREDICTION: After-school and off-site programs using community expertise will take on the bulk of arts teaching.

Here's the good news for art educators: Though an unintended consequence of NCLB has been a slow stripping from the school day of anything that smacks of "extracurricular," the national tide is turning. Casein point: The 2007 National Teacher of the Year, Andrea Peterson, is a music teacher.

As America begins to recognize (or recognize again) that the arts are essential, not peripheral, to true education, arts programs will become part of the solution to the very underachievement that NCLB targets. This year, beleaguered champions of arts education will find their visions finally -- if gradually -- realized, as the growing conversation about art education's intrinsic value plays out in partnerships between community arts organizations and schools. Beyond simply filling in the gaps, this fruitful connection to expertise will offer students rich, meaningful experiences that will likely improve on traditional models for art class.

Take for instance, Big Thought, an umbrella organization managing multiple partnerships between schools and cultural centers in Dallas, Texas. The organization promotes initiatives such as Dallas Arts Partners, providing access to cultural institutions for students and tools for teachers. "In Dallas, we're seeing an increase in arts and music education," says Gina Thorsen, Big Thought's vicepresident of research and development.

Though she concedes this trend is atypical for a large, urban school district, she and Big Thought's executive director, Giselle Antoni, travel the country coaching other communities to pool their resources and follow suit." Arts and cultural organizations have resources that our schools don't have and that can be used to great benefit in the classroom," Thorsen says.

John Abodeely, arts-education manager at the Washington, DC, nonprofit organization Americans for the Arts, has seen a distinct rise in these types of partnerships in recent years. Rather than the old alliances between professional artists and classrooms, which took the form of an occasional artist-in-residence, he says, "the depth of service is much greater." Arts organizations are working side-by-side with teachers and principals to develop arts-integrated curricula that tap into the flexibility and innovation possible in after-school time.

ArtLinks, in Napa, California, is just such a program. Leslie Medine, executive director of its parent organization, On the Move, recounts an after-school mural project ArtLinks made possible. When students at the local Salvador Elementary School discussed the content of their mural (with the theme "School as community"), they discovered that if they were to paint a flag for every nationality represented at the school, there would be twenty-one flags. "That's not necessarily something that would have happened in social studies class," Medine says.

Granted, it's a paradoxical time for artseducation, with cutbacks on the one handand a growing amount of support on the other. But therein lies the hope -- and the challenge, explains Deborah Reeve, executive director of the National Art Education Association. Though times have been tough, she says, "there's a change in the air."

Gina Thorsen, in Dallas, concurs."Perhaps a pendulum swung too far in one direction," she muses. "Now it's swinging back."